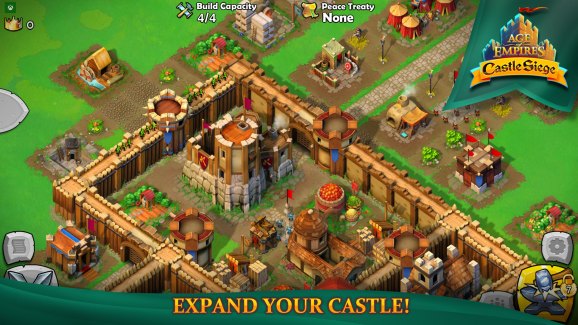 If you want to get two companies to get along, provide them a way to make money together.

Microsoft has unleashed the latest entry in its strategy gaming series Age of Empires on iOS today. This game was previously available through the Windows Store for PC and Windows Phone, but now it is also on the iOS App Store for free. Not only is the game out for both platforms now, but developer Smoking Gun Interactive added cross-platform multiplayer that enables gamers on Windows to play against their iPhone-using counterparts. If you’re wondering what Microsoft is doing publishing one of its first-party games on a competitor’s device, it probably has something to do with iOS making up a much bigger piece of the $30 billion mobile gaming industry than any other single platform.

Age of Empires: Castle Siege is a real-time strategy game that has players guiding a civilization through the medieval age. Of course, it also has a lot in common with the megapopular (and megalucrative) Clash of Clans game that dominates the highest-grossing apps chart. Players can play as a number of tribes and then upgrade their attacking and defensive capabilities to fight against invading barbarians and other gamers.

In a statement, Smoking Gun chief executive John Johnson explained that his team wanted to make something that is easy to learn but difficult to master. Something that could satisfy both new mobile fans as well as people who have grown up with the deep strategy series on the PC.

Smoking Gun also doesn’t plan to just let the game linger on the App Store. It plans to constantly add new content. At the same time, the studio is already working on something new.

“We are also deep into development of our next strategy title which we hope to announce later this year,” said Johnson.