Microsoft’s Surface Go, its latest tablet that aims to be a smaller, and more affordable Surface Pro is finally here. The Surface Go doesn’t bring about any major surprises, but perhaps that’s a good thing.

What you see here is what should have been the core conceit of every small Windows tablet since day one: everything you love about the Surface Pro, just smaller. No half-baked operating systems – though this model does ship with Windows 10 in S Mode – and no strange app compatibility issues. It’s simply a mini Surface that just works.

Naturally, there were some compromises that had to be made to make a Surface tablet of this size, namely in the power department, so scale your expectations accordingly. The Surface Go is what the Surface 3 should have been years ago – and it was worth the anticipation.

Depending on what you actually need, the Surface Go may just be your go-to for everything from work to watching movies and TV. In the race for the ultimate tiny tablet for taskers, Microsoft just jumped ahead of everybody. 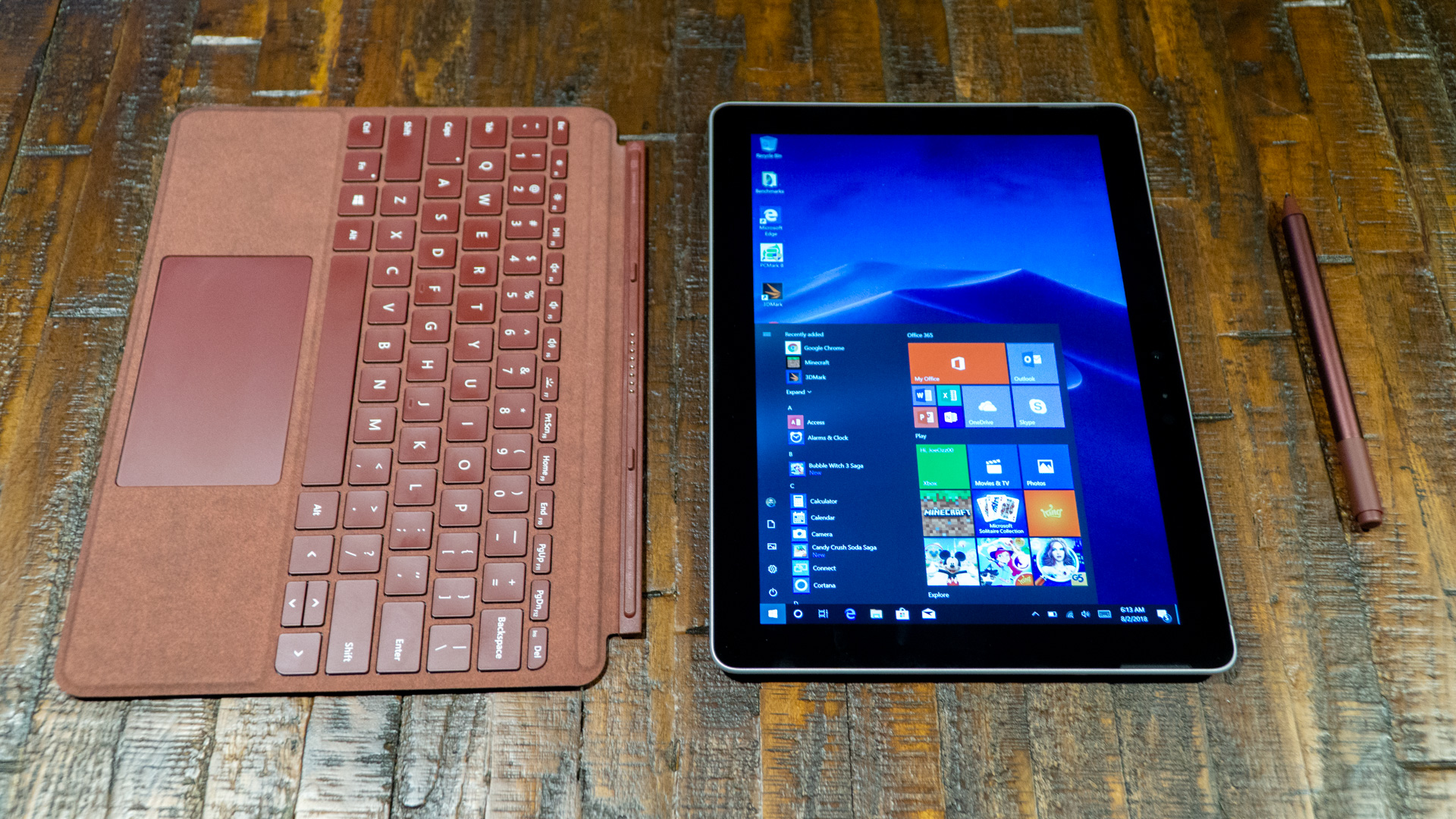 The Surface Go is available now in the US and UK, while Australia and New Zealand are able to preorder it for an August 28 release.

Finally, a standard black nylon Type Cover is available for a more palatable $99 (£99, AU$149), bringing all of the same features in a slightly less premium feel and look.

Apple’s latest iPad, arguably the Surface Go’s biggest rival, goes for $329 (£319, AU$469) to start, which gets you 32GB of flash storage and 2GB of memory – half as much as the starting Windows tablet in either case, albeit behind a sharper screen. For the iPad to match the Surface Go’s storage and memory, that would cost you $429 (£409, AU$599), though memory remains at 2GB in all configurations. All told, the iPad display is far sharper than the Surface Go’s.

All the while, the Asus Transformer Mini is an awfully similar device to the Surface Go in that it offers a 10.1-inch Windows tablet with a kickstand. Plus, both the stylus and keyboard cover are included for only $399 (about £300, AU$534) to get the model with 128GB of storage. However, the screen isn’t as sharp as either alternative, and it comes with 4GB of RAM as its only memory option.

At first glance, the 1.15-pound (0.52kg) Surface Go appears simply to be the Surface Pro shrunken down by 2.3 inches on the diagonal, and that’s largely true – excellent kickstand and all. However, Microsoft clearly put some design effort into this version, opening it up to a larger audience, specifically students.

The first major hint toward the Surface Go’s intended audience is the rather prominent rounding of the edges and angles that Microsoft has applied to the device. Gone are the stark, angled edges of the Surface Pro in lieu of rounder, softer edges that help give this version of the Surface its own distinct identity.

Beyond that, this device is largely the same in design as its forebears, except smaller. The excellent hinge returns and can bend nearly 180 degrees like before, making this device an ideal canvas for digital drawing and note taking.

Microsoft still managed to cram a USB-C port and microSD card reader into the smaller Surface Go, neither of which the latest iPad has. This means that not only can this tablet’s storage be expanded, but it has two ways to hard-wire a dock and expand displays compared to the iPad’s single method, thanks to the mainstay Surface Connect port.

As for the new, obviously smaller, Type Cover, Microsoft manages to deliver full-sized keys (now with more pronounced curves) within a smaller amount of space, and has included a glass trackpad that’s larger in depth than that of the Surface Pro. All told, the Type Cover feels just as snappy as it has before – we would say ‘only smaller,’ but it doesn’t feel that much more cramped when typing.

That said, you will need to get used to a slightly tighter typing experience, especially when the device is on your lap. The keys are spaced closer together than normal keyboards, which alters exactly where your fingers naturally rest, so as to keep your index fingers on the F and J keys.

Otherwise, typing on the Surface Go is much more comfortable than on other 10-inch devices, which should be lauded. For what it’s worth, the iPad Smart Keyboard uses strange, completely round, keys and doesn’t even feature a touchpad – because iOS doesn’t support mouse input. 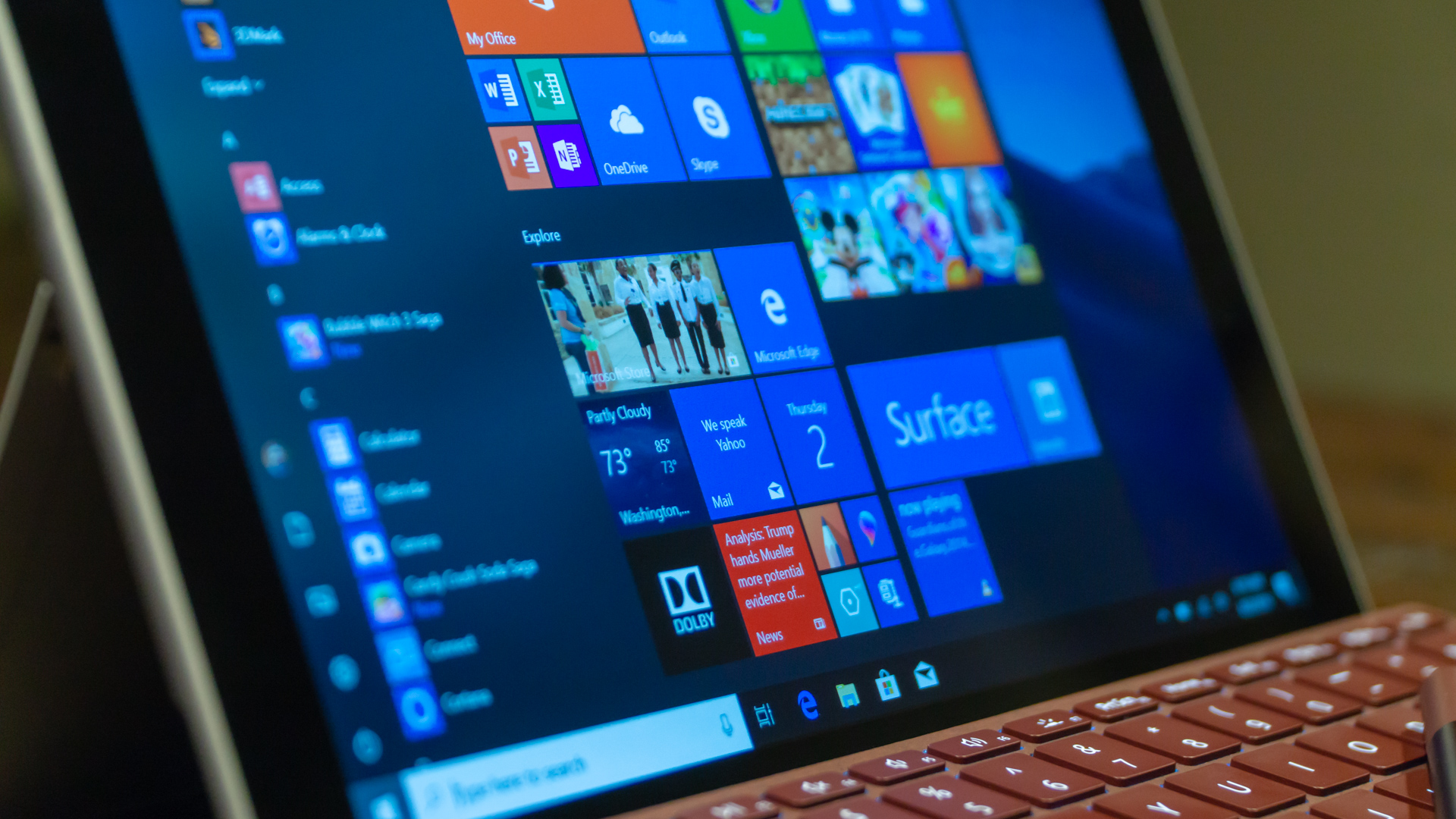 Regardless, the Surface Go display is just gorgeous in everyday use. The display is incredibly color-accurate, and movies and images look fantastic on it. Of course, that 3:2 aspect ratio is great for work and web browsing, but gives full-screen, 16:9 videos the shaft with lots of wasted space.

Like most tablets, the bezels around the display are particularly large, but that’s to allow for gripping the device from any side without interacting with any of the on-screen content. It also allows for the Type Cover to connect to the bottom bezel via magnet for a better typing angle.

Regarding the relatively thick bezels, the Surface Go’s speakers reside within them on both sides of the screen. For such tiny drivers, these speakers sound surprisingly powerful, deep and nuanced in the amount of channel separation they can deliver. This makes the Surface Go just as good of a multimedia tablet as it does a mild productivity device.

Before getting too deep into details just yet, let’s make it clear that you generally shouldn’t buy a tablet or laptop for this price and expect a powerhouse. However, you should get something competent enough to handle basic workloads and casual games, and the Surface Go does exactly that – but not much more. 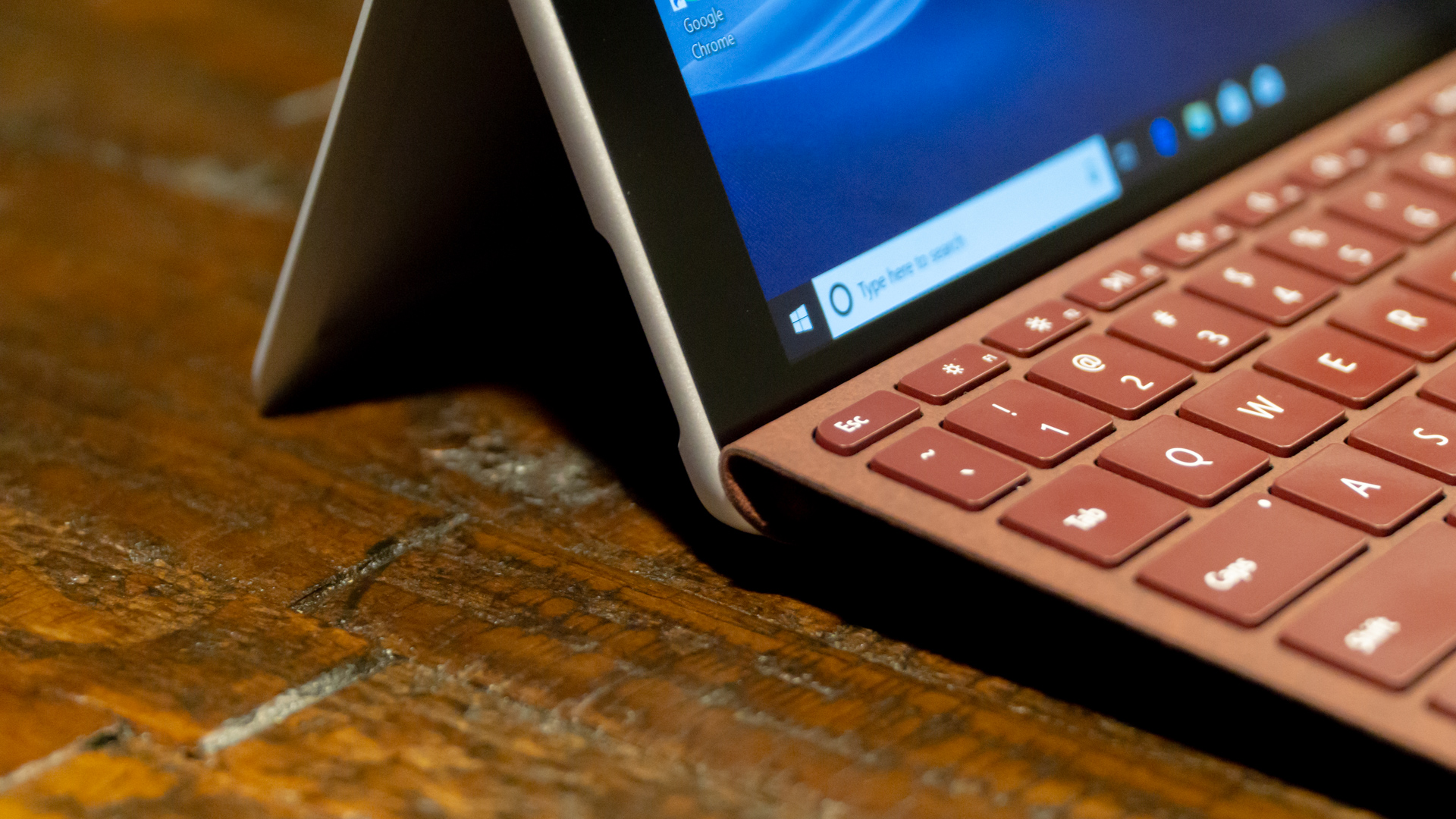 The Surface Go, with its Intel Pentium Gold processor, can handle basic browser-based workloads, like word processing and content management, as well as the suite of Office 365 apps, with ease. With 8GB of RAM in the higher end model, you could even run several tabs-worth of projects and websites and media players.

However, don’t expect this processor to handle high-resolution image or video editing and rendering in the same way that a proper laptop does. That’s not this tablet’s forte.

That said, the CPU inside employs Intel’s HD Graphics 615, which isn’t far off from the integrated graphics inside the Intel processors used in gaming laptops. This allows for some surprisingly powerful 3D rendering on the Surface Go, to the point that Minecraft runs like a dream on the tablet. Furthermore, education apps that use 3D modeling – particularly in the science field – run without issue here, as does Microsoft’s own Paint 3D tools.

Now, the Intel chip here isn’t all that comparable to the latest iPad’s A10 processor, as both were made with entirely different architectures and on different chipsets. Also, Apple literally designs its own chips to work the absolute best they can with iOS – Microsoft cannot do this to the same degree. So, yes, the iPad processor is more powerful than the Surface Go’s, but it’s an apples to oranges comparison.

The iPad ousts the Surface Go in pure speed tests, like Geekbench 4, but the Surface Go is a far more versatile device – even in Windows 10 S Mode. Speaking of which, unless you’d like to keep your device on lockdown for security or simplicity reasons, just upgrade to Windows 10 Home for free once you get this device.

The performance hit to the system with the overhead of full Windows 10 Home ranges anywhere from negligible to nonexistent. At that point, all that Windows 10 S Mode is giving you is peace of mind, which is easily found in Windows Defender and smarter web browsing habits. 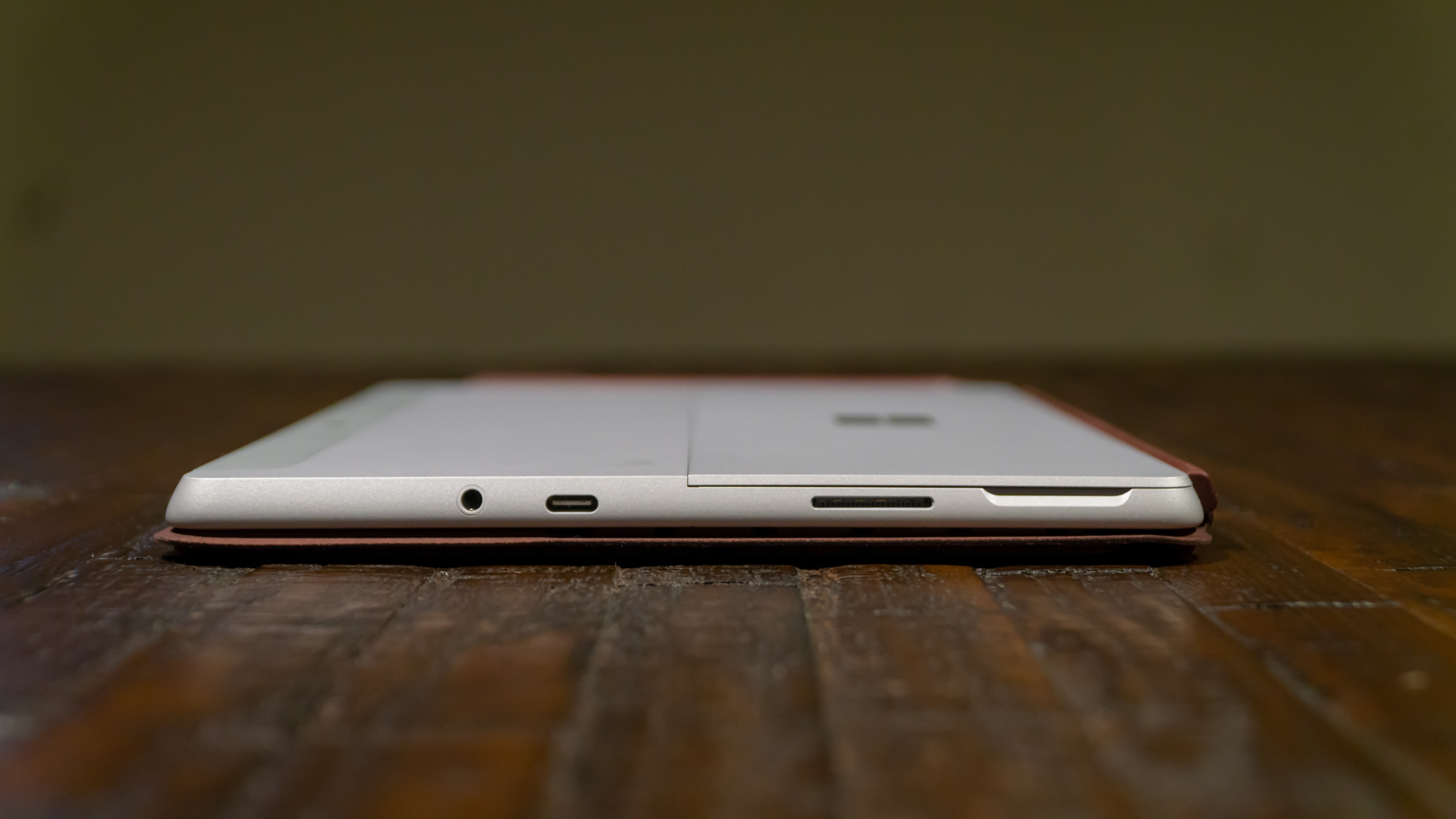 Microsoft promises up to 9 hours of continuous use from the Surface Go. Shocking no one, those aren’t the numbers we could reproduce in our testing, but they’re not awful. What’s weirder is how we’ve found the device to actually last longer in Windows 10 Home than in S Mode.

The difference in our tests is less than an hour, and at any rate, expect the Surface Go to last around six hours on a charge, and perhaps a bit longer if the Battery Saver feature is used.

For folks in fields that are light on hardware requirements and heavy on travel, this device could be a go-to for you. Stay tuned as we test the battery even further in both modes of Windows 10. 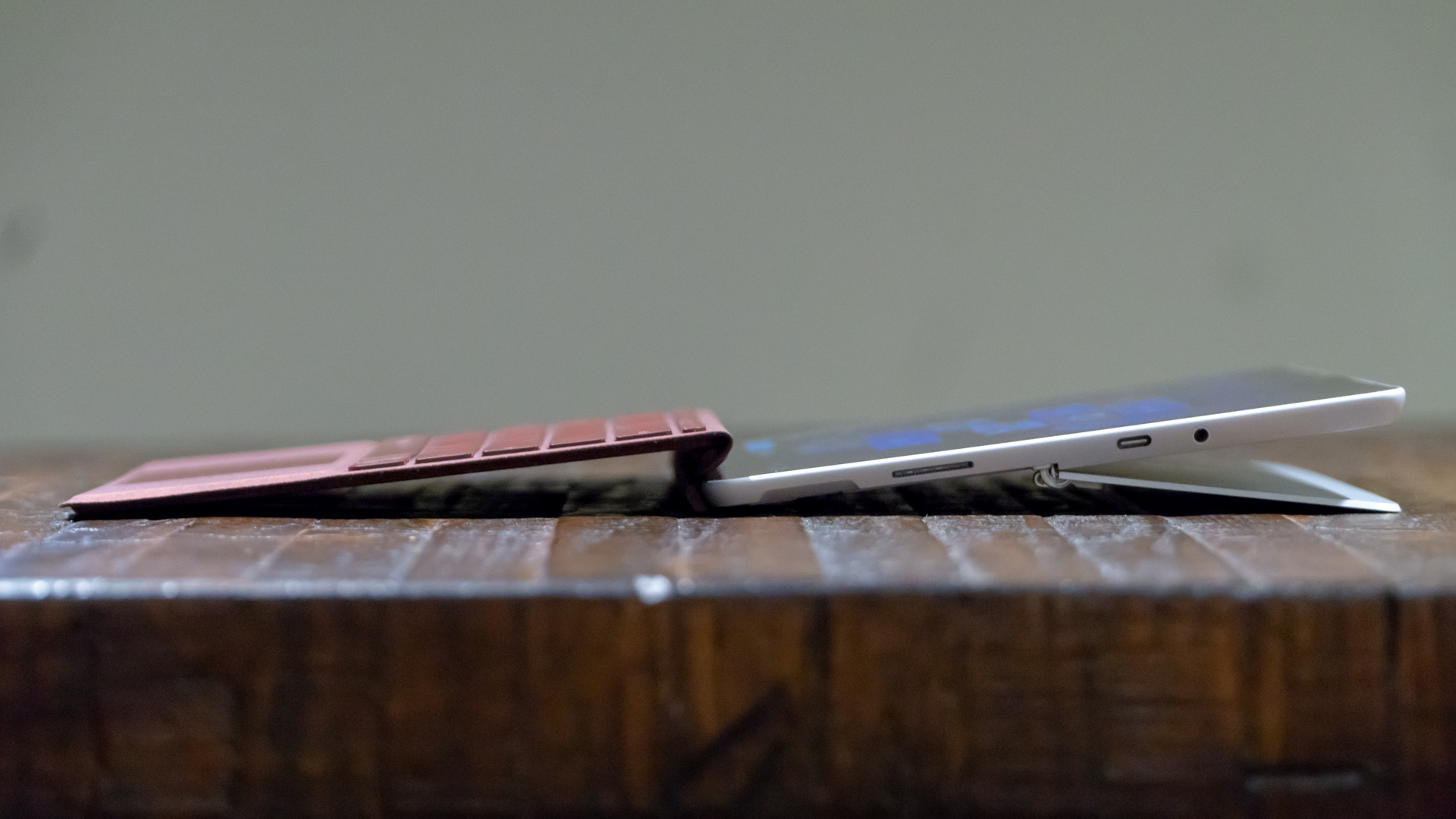 The Surface Go ships with Windows 10 in S Mode. Because this device uses an Intel processor, however, this is largely fine for day-to-day use. While the app selection on the Microsoft Store is paltry in comparison to the software available to download from the internet, at least the device can run every app designed for Windows 10 natively without issue.

Windows 10 devices with Qualcomm’s Snapdragon 835 chip installed can’t say the same, as their processor architectures aren’t compatible with how many Windows 10 apps were built. Windows 10 S might bring with it more security, but if you're careful online (and have Windows Defender installed) you should be alright.

The Surface Go doesn’t have many other standout features to speak of, but we especially appreciate facial recognition login via Windows Hello. While it doesn’t operate in the same way, Microsoft has essentially beat Apple to bringing hands-free, secure login to its tablet. 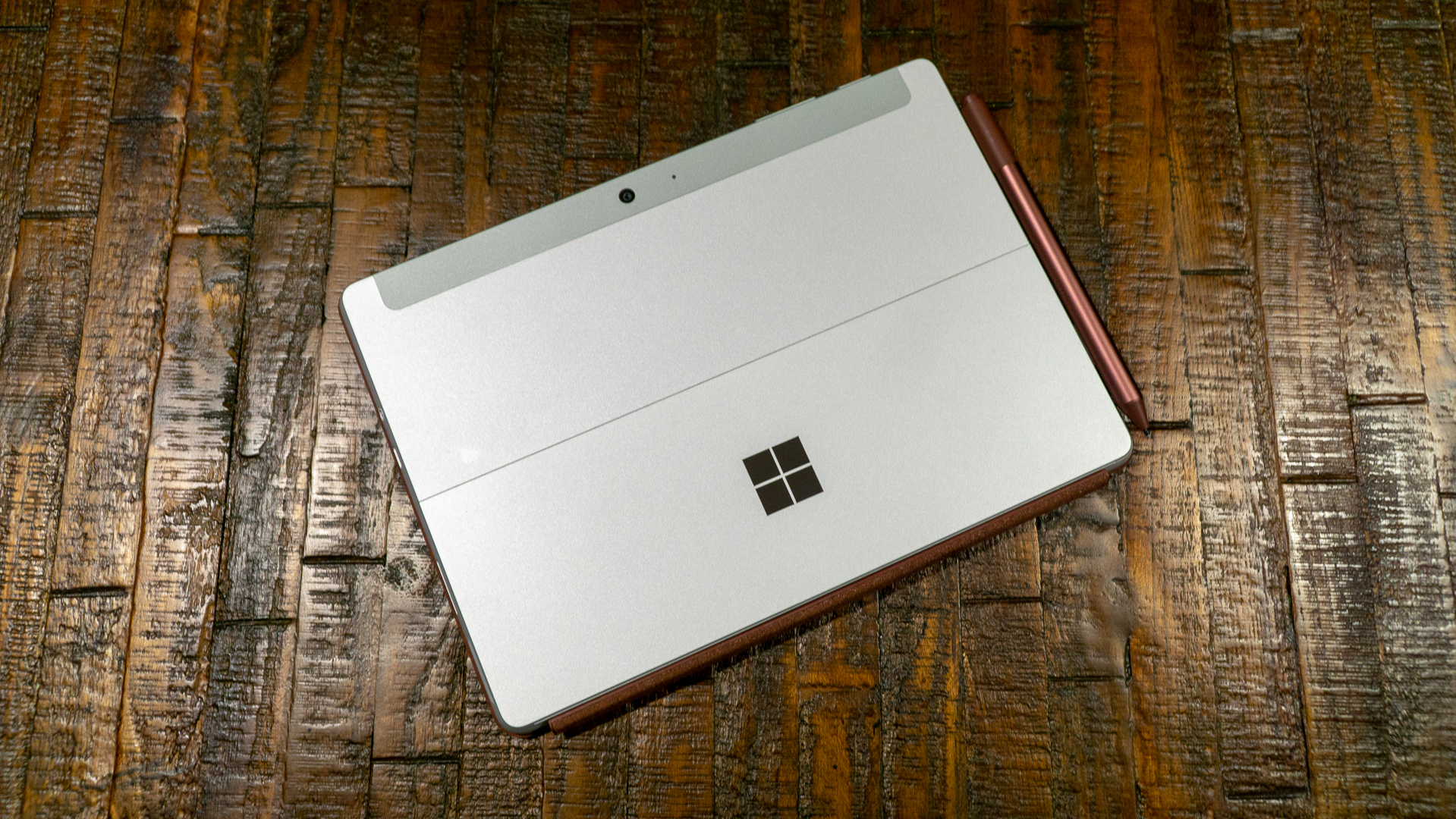 The Surface Go may very well be a niche device, but it’s a niche that’s only growing. With every major hardware vendor focused on smaller productivity tablets, Microsoft has finally nailed the concept of the smaller Surface device, once again showing the world how it’s done.

While you could reduce the Surface Go to being just a smaller Surface Pro, the truth of the matter is that the market is trending toward smaller and smaller computing devices. Now, the Surface Go is there to meet them with a full-blown, 10-inch computer.

Of course, we could complain about how there are still no accessories included, that it’s technically less powerful than the new iPad and that the screen could be sharper, and they’re all valid complaints. However, if you’re looking at the new iPad or another 10-inch tablet to be your next primary computing device next to the Surface Go, or even a secondary gadget, it’s tough to beat this gorgeous machine that’s truly a computer in every sense of the word.