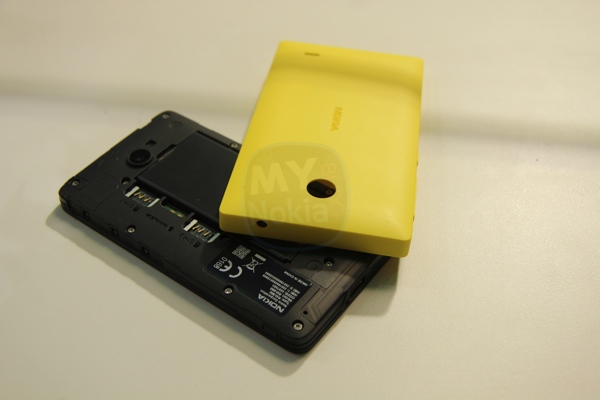 Munir Rahool sends in his review of the Nokia X after a couple of weeks use. He mentions that some Nokia sellers think the Nokia X isn’t even Android, pushing customers to Sammies instead.

It has been little over a couple of weeks since I am using Nokia X. I bought it as soon as it was available in market here in Pakistan.

Don’t ask for the things I had to hear from shopkeepers about Nokia X. The words are that Nokia X is not an Android phone. It is just a java phone that supports –some- Android apps to fool people. Some who claimed to know ^technology^ better said it is WindowsPhone and Nokia is selling it as Android phone.

Shopkeeper succeeded changing my cousin’s mind into buying a Samsung just a day before I bought Nokia X (after going through that same long ‘not Android’ talk).

What more surprising is that some of the leading tech experts are comparing Nokia X against the likes of Moto G or Xperia E1 and declaring Nokia X a failed machine, and many reviewers are comparing the build to Asha 503. I think 503 is one with extra layer of Crystal Clear coating where Asha 501 is how Nokia X almost looks like.

All of those negative words are due to one very simple change that Nokia did!

On the surface it seems if Nokia went through massive change in Android to make it their own. But I think the only deep alteration Nokia actually did is to remove the ability to add Google account in the system.

Allow user to add Google account and all of the apps that are currently not ^compatible^ will be compatible aka people will accept Nokia X as an Android device. Why? Because in minds of common public without Google there is no Android and this type of mentality is not healthy for Nokia among their targeted consumers because trust me, competition is superbly tough in this gray area.

Moving to Nokia X, I believe everyone on MNB knows how Nokia Asha 501 looks and feel. Everything seems to be same in Nokia X, only larger and slightly blockier. It is solid; the back cover is not easy to peel off, doesn’t get fingerprints, it is not shiny and glossy, not slippery at all and I like it.

Nokia brings the lone Back button to Nokia X too, however the way Nokia using it for Android is questionable. At the moment it is creating more confusion in multitasking department than to smooth things up.

How? Long press on Back Button, which currently takes user to Home screen should open list of Running Apps with permanent links to Home-screen and Fastlane because there is no direct way to access to Notifications aka Fastlane which in Nokia’s head double as app switcher. That simple change could take care of big hurdle users are facing for switching between running apps.

Moving to the most talked UI or Launcher. Personally I love WindowsPhone Tile UI. I have it on both my Android phones but tiles on Nokia X felt childish. Over the time it did grow on me in outdoor’s day to day use but not more than that. The older people liked it more because naturally it is easier to see and press.

Customization in UI is clearly not Nokia’s priority. Two sizes for tiles, several colors, repositioning and creating Groups or Folders are all you can do so far. You can add Android Widgets among the tiles.

I switched current UI with proper WindoesPhone Tiles (using Launcher8 app). In fact I have been thinking to buy that App’s pro version which supports 3 big (or is it 6 small) columns. Those look great on Nokia X.

Fastlane is helpful, better than regular Android notification bar, but not as easily accessible when we are working within an app. I hope Nokia enable left or right swipe-from-edge to get us into Fastlane in some upcoming update. Or at least give us links to Home screen  and Faslane in their pull down bar in order to access to Fastlane from any app, to make it as functional as it suppose to be, specially for multitasking like I said before.

Keyboard has to be a major highlight of Nokia X. Typing aside; Gestures for common tasks such as copy, paste or selection are brilliantly done. Extra keyboard for cursor control is welcome and a hand-writing pad is there, which works equally well for languages other than English.

Performance
I will wrap it up fast here. I have an Android 4.2 phone by relatively a better brand among locals, running with 256mb ram on 1.2 dual cores. I bought that in exactly half the price of Nokia X. Performance of Nokia X against this truly budget Android is very much the same, which came as a big surprise to me. Some apps works well and some stutters but between the two it is very much the same performance. Maybe it is the difference between Android 4.1 and 4.2. Android 4.2 is very well optimized I can tell this from personal experience of using low-spec droids.
Having said that, it doesn’t mean Nokia X didn’t perform well because Nokia X crushed a Samsung and couple of other Androids of same category.

Because it is all about apps, Nokia played very smart here by not keeping themselves only to their own app store. Nokia includes 4 extra stores for users to fill their Nokia droids with Android Apps. Now Nokia needs to be very LOUD about it for consumers to notice because clearly they have no clue about that.

Most of the games and apps I tried on Nokia X works including Google Maps. Unfortunately Nokia Browser sucks, I moved to Opera and Chrome. FireFox is little too heavy for Nokia X.

Battery is same as any other Android or smart phone. You use your phone for more than talking and texting, you will have to charge it daily.

Final words
Well, I didn’t love it as much as I was hoping to but I like it very much. It is deployed to attract users of Asha and feature phones and from the feedback I can tell Nokia X is doing it well. But then there are a couple of things disappointing the consumers who are already confused by negative words in market.

First not having a front cam turned out to be a big let down and secondly to be honest it IS slightly costly against the competition Nokia now facing from local brands. Not to forget the shining “not an Android” banner.

I think Nokia should put a Flashlight in X. Front Camera in Nokia X+ and 1gb Ram with Adreno 400 in XL would be perfect for consumers. With 1gb ram, XL could kill the market at right price.

And please Nokia, allow users to add the Google account. You will give yourself a great favor by doing this.

10 minutes of random use of Nokia X

Anger of Stick 3 on Nokia X