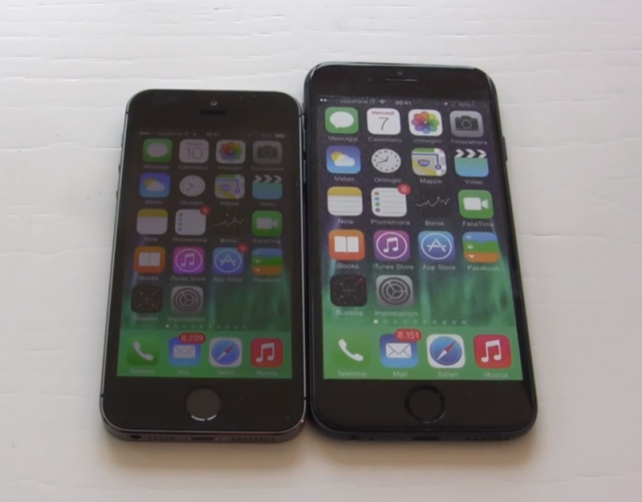 Mockups of Apple’s anticipated iPhone 6 are appearing left, right, and center, and a handful of interesting videos have offered iOS device users a closer look at the handset’s “final design.” Two new videos have now hit the Web: the first compares an iPhone 6 mockup against the iPhone 5s and fifth-gen iPod touch, while the other compares a similar mockup in both Space Gray and gold against the HTC One M8 and Samsung Galaxy S5.

The bottom line is that both videos show us more of the same: based on these most recent mockups, Apple will launch a bigger, thinner iPhone 6 handset later this year, and the device should feature an all-aluminum rear shell and a relocated power button, as rumored. What’s interesting, however, is seeing how this mythical device compares against the market’s current offerings.

Macitynet.it shared the first video, and in it you can see how an iPhone 6 mockup looks alongside both an iPhone 5s and a fifth-generation iPod touch.

The video reaffirms what we’d already suspected: that based on leaked designs and schematics, the iPhone 6 should look a lot like the current-generation iPod touch. Check out the video and see what you think:

The second video, on the other hand (from 9to5mac), looks at how a pair of iPhone 6 mockups (in both Space Gray and gold) compare against some of Apple’s smartphone rivals – namely, the HTC One M8 and Samsung Galaxy S5. The hike in size of Apple’s iPhone 6, combined with its thinner design, means the anticipated handset looks more like the rival HTC and Samsung handsets than than the current-generation iPhone 5s.

Most recently, we heard Apple’s iPhone 6 could feature support for near field communication (NFC), and that the 4.7-inch device may launch one month early in August. We’re also expecting a sapphire glass display, improved cameras, and a faster “Apple A8” processor to appear in the next-generation smartphone.

See also: AppAdvice Daily: Get Romantic The App Way And Check Out A Great New Photo Editor, AppAdvice App Of The Week For May 12, 2014, and The iStick Is A Flash Drive With A Built-In Lightning Plug For The iPhone, iPad.

Mockups Of Apple’s Bigger iPhone 6 Are Compared In 2 New Videos is a story by AppAdvice.com
AppAdvice - iPhone, iPad, iPod, App Reviews + News
Get the latest tips & apps for your Smartphone