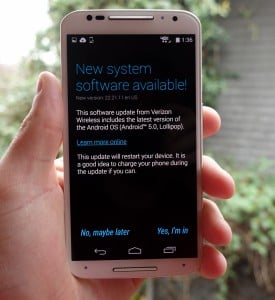 Owners of the original Moto X (2013) can now rejoice, as they will be receiving an Android 5.1 update soon. Motorola’s Senior Director of Software Product Management, David Schuster has announced in a Google+ post a few hours back, that they have started the Moto X (1st Gen.) Android 5.1 soak test in France and Germany with more deployment next week is its successful.

“In addition, we have addressed an issue we found in a previous soak test and should start full soak testing in the US and Brazil for retail later this week. If all goes well, full deployment can happen the following week.”

The talks about Moto X (2013) receiving an Android 5.1 update has been in the air for quite some time now. If everything goes out as planned then Moto X (2013) will soon be in a for a sweet lollipop treat. There is not much improvement in 5.1 over 5.0.2 , but who doesn’t like to have the latest software update on their devices?

Do you own a Moto X(1st Gen.) device? Have you flashed your device or are you still waiting for the OTA? Let us know in the comments below.