Owners of the latest Android phones from Motorola will be saddened to know that Square Register and Jawbone Up accessories aren’t currently supported for the Motorola Moto X, Motorola DROID Mini, Motorola DROID Ultra, and Motorola DROID Maxx. More specifically, according to Motorola’s official support page: accessory devices that have a microphone input, but no microphone output won’t work at this time. Even though PayPal Here wasn’t specifically mentioned, many users, including myself, aren’t able to get it working as well.

We reached out to Motorola customer support to see if this was a hardware limitation, software limitation that could be fixed via an upcoming OTA, or if the vendors of these devices needed to update their applications to get everything working. According to our support conversation, Motorola is aware of the issue, and it’s definitely on their radar. Others seem to have similar results over on the official Motorola forums. 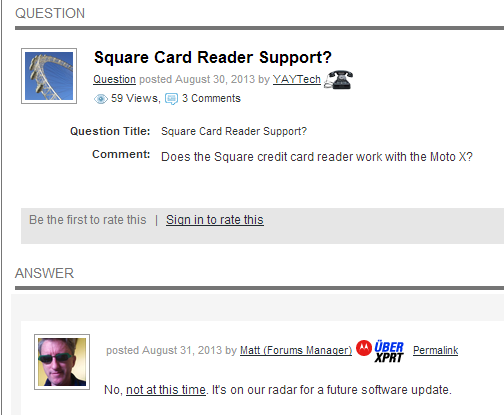 It looks like future support for TRS (tip, ring, and sleeve) plug devices is coming in a future software update. If you were looking to purchase one of these Motorola phones, is this a deal breaker for you or are you hopeful for a timely software update in the future? Me, I’m just going to tether to my Nexus 7 (2013) for the time being.