The future Verizon flagship include a spectacular 720p HD screen and a 1.2GHz dual-core chipset

Images and preliminary details for the rumored Motorola DROID HD have reportedly been unveiled.

According to a report from Engadget, that site that received photos and details of the device, highlights include Android 2.3 Gingerbread, a massive 4.5-inch HD display and an 8-megapixel camera with 1080p video recording capability. The Droid HD is also rumored to have a front-facing camera for video chat and an HDMI-out port.

The Droid branding, if it is the real deal, is usually limited to Verizon devices, which means that the Droid HD would land on Verizon most definitely. Based on the size and sim card slot alone, it is probably not a 4G smartphone at all, and more than likely a worldphone.

As BGR comments, and we tend to agree, if the HD is a 4G device it would be the thinnest to date, and would represent some serious strides in 4G technology. Definitely an impressive step forward if that is the case.

No word on when the Droid HD will arrive on store shelves, but with images out in the wild it could launch in the coming weeks.

Here's to hoping it lands soon! 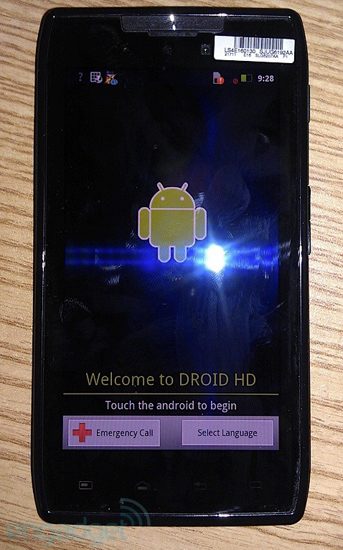