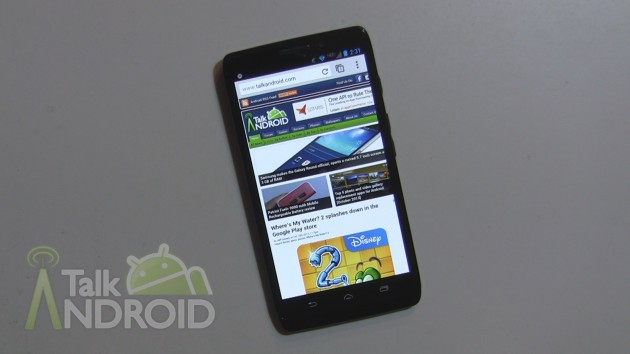 Motorola’s concentration is on the Moto X, but they haven’t left Verizon Wireless and the DROID line behind. In fact, Motorola signed an exclusive deal with Verizon making them the sole manufacturer of DROID phones going forward. For the last two years, Motorola’s emphasis was on the DROID RAZRs, but this year the “RAZR” name was dropped even though the overall look reminds us of past RAZRs. In the past, Motorola’s flagship was almost always a DROID, but this year, the DROID line is taking a backseat to the Moto X. Other than a few models, Verizon was used to pretty much being the only U.S. carrier to offer phones made by Motorola. That isn’t the case this year since the Moto X is available on all the major carriers, including Verizon. For the first time the DROIDs are actually a variant of another flagship. The DROID mini, DROID Ultra, and DROID MAXX are all essentially a Moto X in terms of pure specs. Yes, there are differences, but are they compelling enough to buy the DROID Ultra (or any other DROID) over the Moto X? Hit the break to find out.

I was a big fan of last year’s DROID RAZR HD and DROID RAZR MAXX HD, but not so much with this year’s DROID line. I know a lot of people weren’t fans of the soft-touch Kevlar, but I loved it. It distinguished itself from other phones and it felt great in the hand. Motorola hasn’t dropped the Kevlar coating, but the Ultra has a shiny glossy feel, which isn’t Motorola-like to me. On the other hand, the DROID MAXX does have a softer touch. I’m not sure why they didn’t go with the same design on the Ultra, but my guess is they wanted more differentiation to get consumers to cough up an extra $100.

If you look close enough you can see a honeycomb pattern on the back, but it’s very subtle. You also won’t find the hershey bar (pyramid) style design found on the Moto X. The thickest point is where the camera is and then it tapers as you get down to the bottom. The DROID Ultra comes in at 7.2mm thick, which is pretty thin, but the overall boxy and industrial design isn’t all that comfortable in the hand. Motorola was able to get away with it in previous year’s since the display was much smaller. The DROID Ultra (and MAXX) has a 5.0-inch display, which is 0.5-inches larger than last year’s DROID RAZR HD (and MAXX). Both the DROID DNA and the Galaxy S 4 sport 5-inch displays and are more comfortable in the hand. 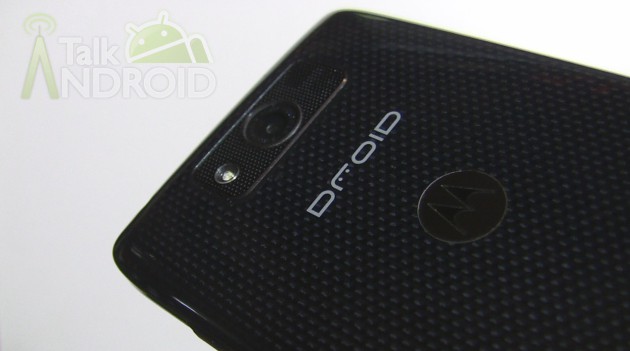 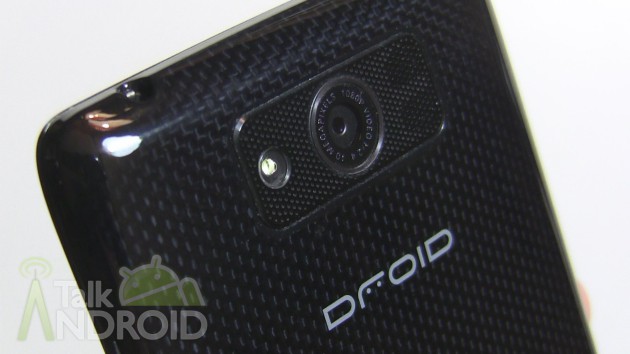 As far as buttons and ports go, you will find the power button on the right side towards the top and the volume rocker just below it, which also doubles as a nano SIM tray. At the top is the microphone jack and at the bottom is the microUSB port. The left side has no buttons or ports. One big change is the phone has hard navigation keys rather than on-screen buttons like last year’s DROID RAZR line and this year’s Moto X. This is a strange decision, but it does provide more screen real estate. 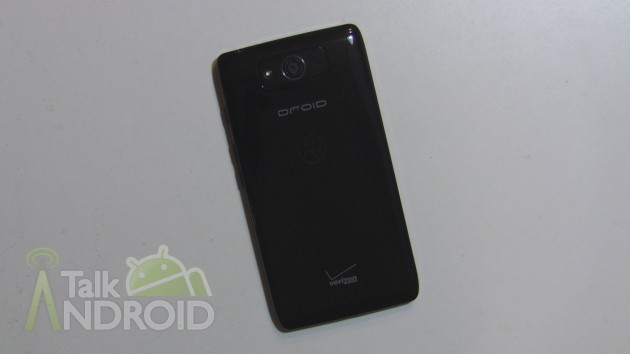 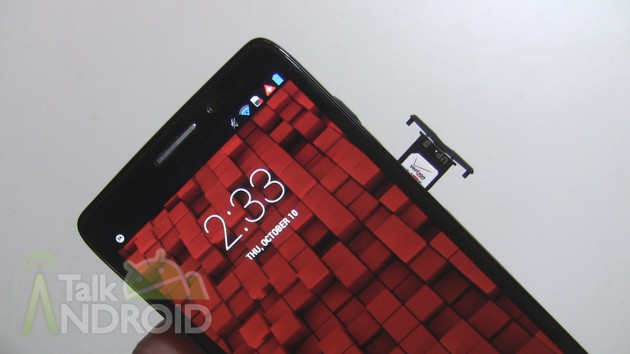 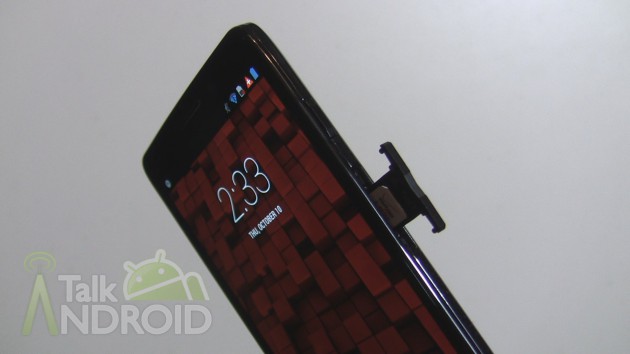 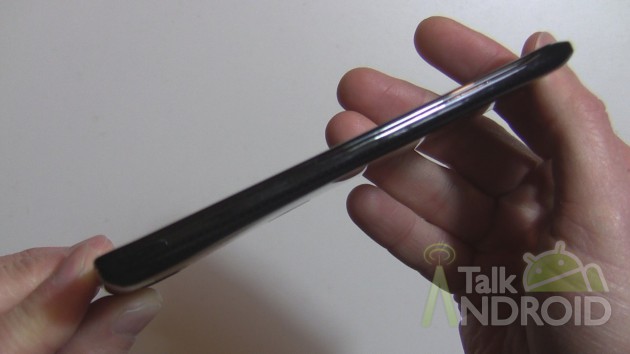 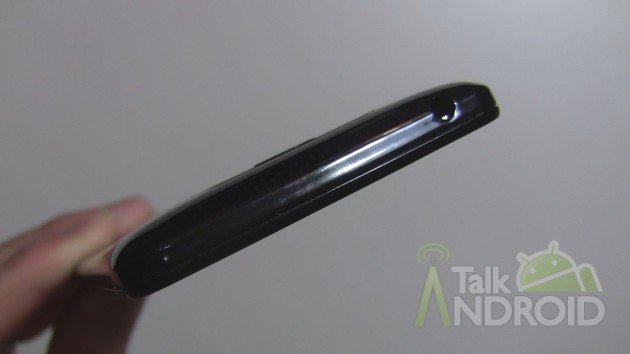 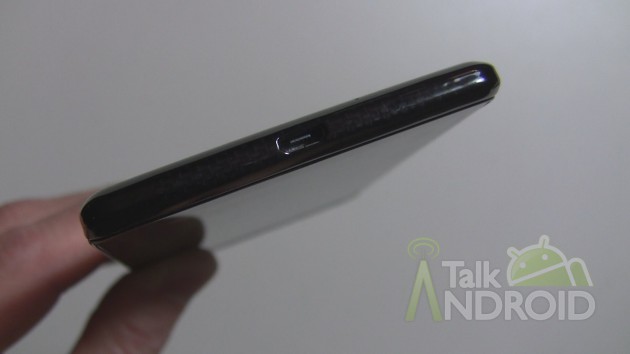 Just like the Moto X, the DROID Ultra includes Motorola’s X8 Mobile Computing System, which includes a software-optimized 1.7GHz dual-core Qualcomm Snapdragon S4 Pro for apps, a quad-core Adreno 320 GPU, a natural language processor, and a contextual computing processor. The natural language processor is dedicated to Touchless Control and the contextual processor is for the Active Display. Hardcores will scream that a dual-core is not good enough, but trust me, the DROID Ultra responds as good as a quad-core phone.

The display is the same as the Moto X, but the pixel density is a little less. It’s not going to blow your mind like the HTC One or the LG G2, but it’s more than adequate for the average consumer.

Motorola promises 24 hours of life with the 2,130mAh battery, but I would say 24 hours is pushing it. The fact that the battery is smaller than the Moto X’s (2,200mAh) and is pushing a bigger screen (5.0-inches vs 4.7-inches) makes it nearly impossible for it to perform as well. I was able to get about 15+ hours out of it with moderate use.

The DROID Ultra (as well as the MAXX and Mini) have the same software as the Moto X. It’s basically stock Android 4.2.2 with some enhancements such as Touchless Control, Active Notifications, Motorola Assist, Motorola Migrate, and Motorola Connect. The only addition is the Rings Weather & Battery Widget and DROID Zap. DROID Zap allows you to share photos with other DROID owners in real-time. It’s very similar to Samsung’s All Share. The sharing feature was only available on this year’s DROIDs, but a recent update allows photo sharing between all DROID owners on Android 4.0 or higher. I honestly didn’t get a chance to test it since I didn’t have another DROID on hand, but unless others in your family or your friends own a DROID, it’s kind of useless. I know the DROID brand is big, but it’s nowhere as big as Samsung’s Galaxy brand. I can see using something like this (All Share) on a Galaxy phone since chances are good that people you know will own one, but a DROID?

For the other main software features, I’m going to refer to our Moto X guides as well as my hands on videos. Everything works exactly the same, with the only exception being one extra command for Touchless Control: DROID owners can say “Find My Phone” to force it to ring. Just click the links for each category to get more info. For your convenience, I included our hands on videos for each category. I judge software features on if they are useful or just cool and useless. Just like the Moto X, the majority of features on the DROID Ultra are very useful.

You will find the same camera interface on the Moto X, which is very simple. The settings only consist of toggling the flash, auto focus, panorama, HDR, Geo tagging, and Quick Launch (on or off). For focus, your choices are auto or focus on touch. For HDR, it’s either on or off, but they have an auto mode (on by default). There are no other settings such as exposure or white balance. For video, you can set it to slow motion. The settings menu can be accessed by sliding your finger from the left side to the right. Just like the stock Android camera, you can access the gallery by sliding your finger from the right side to the left. Most consumers don’t fool around with the settings, so I can understand why Motorola took out a lot of options, but it would have been nice if they included some features for the more experienced users. Overall the interface might be a little too simplified for some, but most people will love it.

The DROID Ultra camera sports the same Clear Pixel technology found on the Moto X. If you’re not familiar with Clear Pixel technology, it allows for more light and speeds things up a bit. Most other cameras sport a Bayer RGBG filter, which means each 4X4 pixel area of the sensor is covered with red, green (2), and blue light filters. The new DROIDs and Moto X use a RGBC filter, which is similar, but the “C” stands for clear. This means that one of the four pixels receives a full unfiltered amount of light while sacrificing one green pixel. This equates to 50% more light. Obviously this will help in low light conditions, but it will also make the camera a lot faster.

Snapping shots is very easy since you can touch anywhere on the display. Holding your finger down will give you burst shots along with a counter telling you how many you have taken. You can also zoom in or zoom out by sliding your finger up or down on the display. The shutter is really quick and can handle my fast-moving 4-year old with no issues. Plus, you can open the camera in less then a second with Quick Capture: Just flick your wrist two times and the camera app will open. It works great.

The only real problem is the quality of photos suffers the same issues as the Moto X (See the review for images). The good news is that it’s a software issue and Motorola has fixed it. The bad news is who knows when Verizon will release it for the DROIDs? It’s already hit the Moto X on Sprint, T-Mobile, AT&T, and U.S. Cellular. As usual, Verizon is the last in line, and since the DROIDs play second fiddle, the wait could be even longer than Verizon’s Moto X.

I was actually surprised that Motorola bothered with the DROIDs this year, and even more surprised that they plan to continue to release them. Now that the Moto X has become the face of Motorola and is available on all major carriers, the DROID seems so amateur. Motorola’s emphasis and concentration is going to be on the Moto X, so you can expect software updates to be pushed in that direction. We have already seen evidence with this latest camera fix update. Unless you feel so strongly that you need a little larger screen or smaller screen (as in the Mini), I can only recommend the Moto X instead of either of the new DROID phones. The DROID MAXX does offer a much bigger battery, but other reviewers aren’t as impressed with it as last year’s model. You just have to ask yourself if you want a fresh home cooked meal or yesterday’s leftovers? Go with the Moto X, you won’t be disappointed.