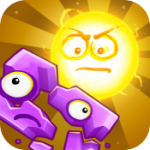 The sun: the source of all life, the hub around which our planet orbits, the eventual assassin of Earth. Many people have dreamed of holding the power of the sun in their hands. What's less clear is what said people planned to do with it. Well, Naughty Bricks [$1.99] has an answer: fling it at giant floating space bricks with eyes while they make sassy remarks about your skills. Hey, it's a better answer than most of us could come up with on the spot.

That's basically the premise of the game. The bricks are, I guess, harrassing the Earth? Threatening it? The sun has to take matters into its own hands and wipe them out. Each stage occupies a single screen and has you launching the sun in an attempt to clear all of the bricks. Generally speaking, you only get one shot per stage, so you have to plan your shot carefully to make sure you're ricocheting in such a way as to take out every brick. Shooting the sun is a bit like working a slingshot in reverse, which is a bit counter-intuitive at first if you've clocked a lot of hours into Angry Birds [$0.99], but is easy enough to get your head around. The sun, looking rather more svelte than usual, will bounce off of any object, including asteroids, but if it sails off into space without taking out the last brick, you fail the stage and have to retry. 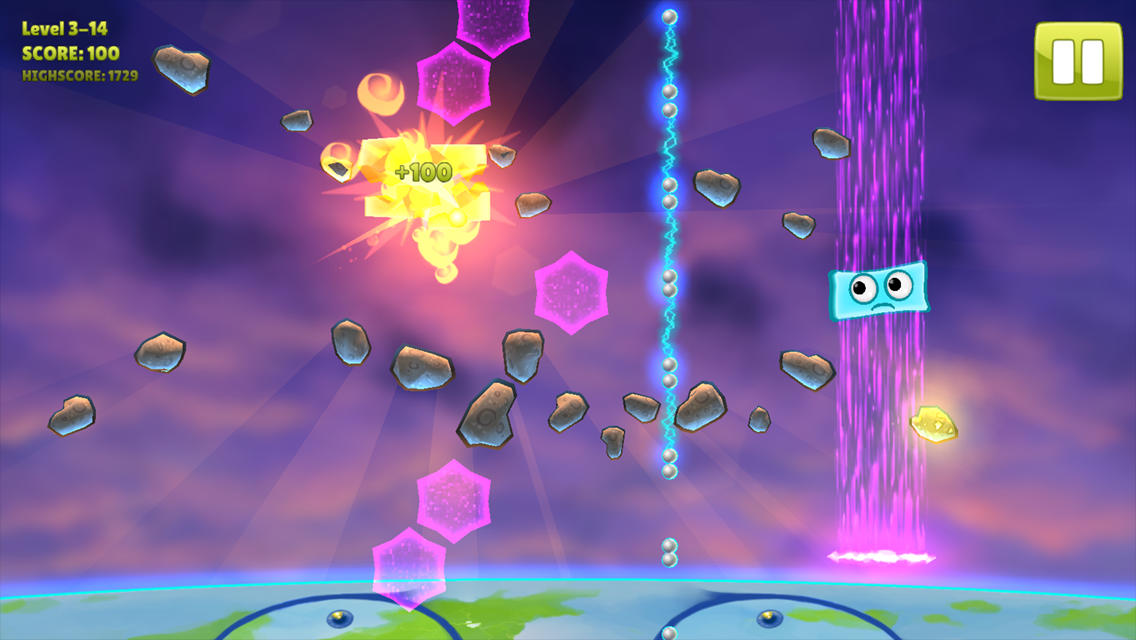 Naturally, there are quite a few twists that show up through the course of the game to complicate matters, such as black holes that alter your trajectory, wormholes that teleport you from one location to another, purple distortions that catch the sun and let you take another shot, and so on. The last set of levels throws a very interesting mechanic into the works. You gain the ability to rewind time for your sun, allowing you to, for example, shoot at three bricks in a line and simply reverse time after each one, so you can hit all three before bouncing off in another direction. It's a really interesting addition, so I have to wonder why it was left for so late in the game.

At the moment, there are four sets of eighteen levels, each bringing its own twist on the gameplay you've learned up to that point. The first group of leves are deceptively simple to clear, requiring about the same amount of planning that would go into a billiards shot. Combined with the cute, colorful graphics and the whimsical music and sound effects, it initially felt like I was playing something meant for little kids. Well, I still think kids will have a great time with this, but this game really cranks up the heat once you're past that initial set. There are often so many factors in play that simply clearing the stage is challenging, let alone getting a three star ranking, which requires you to go out of your way to smash gold asteroids. 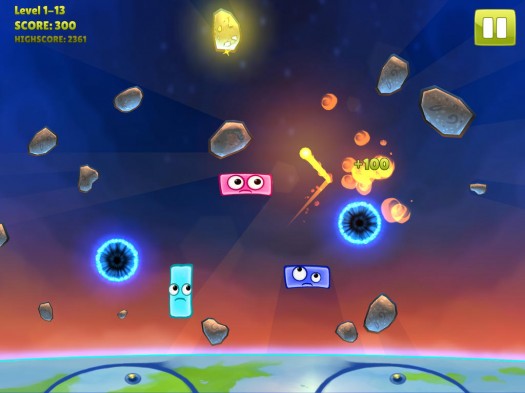 Clearing each stage opens up the next, but if you happen to get stuck on a particular stage, Naughty Bricks will offer help in two stages. First, it will offer you a hint, which uses a red arrow to suggest a shot that, in the early run, will likely result in a cleared stage, but in later stages, is almost entirely useless. After that, if you continue to struggle, the game will graciously allow you to skip the stage. Of course, if you want to unlock the next set of stages, you need to at least clear the last stage of the previous set, so while the game is very lenient, at some point you are going to have to step up and finish at least a few levels. It's nice to see a game like this find a good middle ground between asking too much of the player and asking nothing at all.

In terms of presentation, Naughty Bricks checks all the right boxes. The game is bright and colorful, with all of the elements of each stage very clear and easy to visually process. The bricks lack personality in their appearance, but it's made up for on the audio end, because they chat constantly. With their high-pitched voices, they'll snark on your aim, subtly giving the player clues, and react with a scream or sigh of relief when a shot is coming towards them or just misses. While they didn't quite cross the line with me, I think there's a reasonable chance a person could find the voices annoying. Whether that was intended or not is best left to speculation. The UI is pretty much stock for this type of game, though I do want to highlight the charming inclusion of facts about the sun and astronomy on every victory screen. They're informative with just the right amount of silly, and I think kids in particular will get a lot out of them.

Naughty Bricks isn't the kind of game that's going to stay with you for a very long time after you finish it, but it's a good time while it lasts. The levels are well-designed, the challenge is pretty much just right, and there are more than enough new mechanics to hold your interest through the end of the game. The whole genre of flinging things at other things with realistic physics is years past the saturation point at this stage, and Naughty Bricks doesn't really do enough to stand out, but if you're finished all the levels in Angry Birds Space [$0.99] and still want to flick things around in space, this is a pretty good way to go about that. If you have kids, they'll probably have a great time with this and might even learn a few things, too.