New Google Wallet App Moves Past NFC and to All Major Carriers. iPhone Version on Tap? 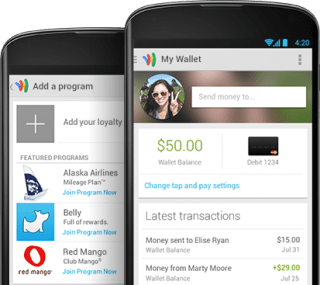 Google is launching a new version of its Google Wallet app for Android today and there are some big changes.

Most notably, the app will now be available on all Android devices running version 2.3 and higher in the U.S., rather than just a handful that support NFC technology.

At the same time, Verizon, AT&T and T-Mobile subscribers will finally be able to download the app, though they will not be able to use it to make payments with their phones through NFC technology in stores.

That in-store payment option, which has struggled to gain traction, will still be limited to a handful of devices on just a few carriers because Verizon, AT&T and T-Mobile are the backers behind the Isis mobile payment app, which also relies on NFC.

Still, those with any new Android phone will be able to use the app for several other tasks, many of which weren’t available on Google Wallet in the past.

First, users of the new app will be able to send money for free to any adult in the U.S. with an email address by linking their bank account with the app or by using their Google Wallet balance. With this move, Google Wallet will now compete with similar offerings from PayPal and Braintree’s Venmo. Money transfers funded by credit card or debit card will also be possible, for a fee. Those who use this peer-to-peer pay will get early access to a similar money-transfer product being rolled out on Gmail.

Google Wallet will now allow people to add any loyalty card to the wallet by scanning the bar code or entering in the card number. Users will also be able to use their loyalty cards by scanning them at checkout; loyalty-card redemption was previously limited to NFC devices and NFC-equipped retailers.

The new Google Wallet also comes equipped with integrations with specific loyalty programs, such as Belly and Alaska Airlines, that allow for new sign-ups through the app.

One other big change has to do with how Wallet users find and redeem discounts and promotions. Google Wallet users can now upload offers found through Google Search, Google Offers, and sites such as Valpak, and redeem them in stores by scanning their phone at checkout.

Google Wallet’s expansion of features that don’t rely on NFC technology will only add to the speculation that the app will soon be available on Apple iPhones. While that move seems increasingly likely, Google won’t confirm it just yet.

“We want to bring Google Wallet to all smartphone users, and we’re working to do that as soon as possible,” a spokesperson told AllThingsD.