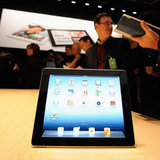 Rumors run rampant about new tech products, especially when it comes to Apple. There's no shortage of gossip around Apple launch dates (or estimated launch dates), and while it's fun to imagine what the next shiny product will look like, you sometimes forget where the line between rumor and fact is drawn. Here, we'll look back at the recent iPad rumors and explore which ones were fiction and which ones became a reality.

Rumor: It will be called the iPad 3 or iPad HD
Fact: The new iPad is simply called iPad. No numbers or letters attached, because Apple "doesn't want to be predictable."

Rumor: It will come with 4G LTE speeds.
Fact: It sure does! Offered up through AT&T, Verizon, Telus, Rogers, and Bell, the new iPad will come in two flavors: WiFi-only and WiFi + 4G.

See the rest, including the truth about a cheaper iPad after the break.