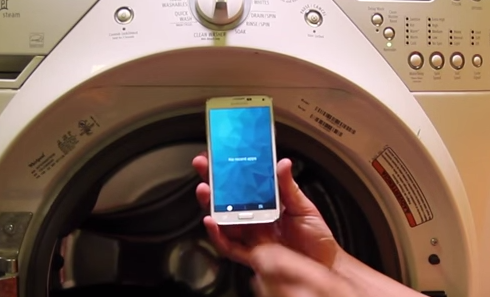 We’ve seen a video come out earlier showing how well a Samsung Galaxy S 5 can survive drops and being run over by a Tesla Model S. A new video released by TechSmartt tests the waterproof capabilities of the Galaxy S 5. Samsung is releasing this model with IP67 rating for water resistance. This means the smartphone should be able to survive being submerged in water 1 meter deep for at least 30 minutes.

In the test, the Galaxy S 5 is submerged in a pool and left to sit for an hour. At the conclusion, the device is still working just fine. Although the particular unit used in this test far exceeded the IP67 standard, leaving the Galaxy S 5 underwater for more than 30 minutes is probably a risky move.

TechSmartt was not content to end the testing there though. For their next test they put the Galaxy S 5 inside a jeans pocket and threw it in a washing machine to see how it would survive. An odd, extreme test, but probably plausible that someone could accidentally put their phone through the wash. In what many people may consider a surprise, the Galaxy S 5 came out of the wash, nice and clean and more importantly, working.

We will probably see more videos testing the ruggedness of the Galaxy S 5, sometimes in unusual ways, but thus far it looks like Samsung has done a pretty good job of anticipating some of the extreme conditions users may subject their new device to.