Nexus 5 and Android 4.4 Kit Kat appear to now be on tap for October 28 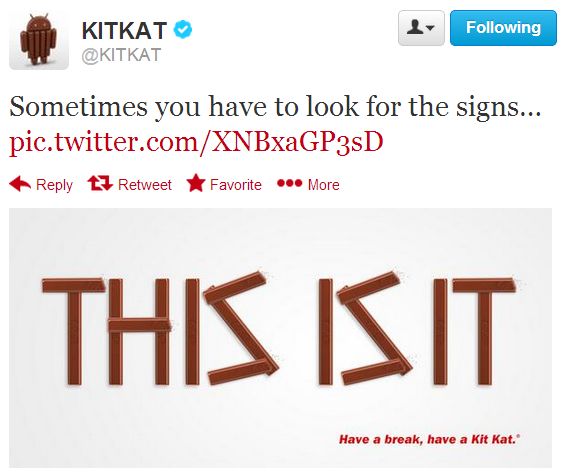 Yesterday, the Google+ Kit Kat page posted what many people thought was a hint that Android 4.4 (and the Nexus 5 ) would be announced on October 18. The post referenced the C&C Music Factory song, “Gonna Make You Sweat (Everybody Dance Now)”, which was released on October 18, 1990 and happened to be exactly 4 minutes and 4 seconds long. It appears Google was really trying to tell us something, but we needed to dig a little deeper.

The Kit Kat Twitter account posted “Sometimes you have to look for the signs…” with an image of “This Is It.”  “This is it” is a movie dedicated to Michael Jackson and was released on October 28, 2009. I should also point out that this tweet was sent out before the Google+ post. Okay, but how do both of these clues tie together? The original name of C&C Music Factory was “28th Street Crew”. So now we have the number “28″ involved with both clues. I do think the 28th is the actual date and here’s why….

Last year, the same event (Nexus 4 and Android 4.2) was scheduled on Monday, October 29, 2012 in New York City. It was later cancelled due to Hurricane Sandy and they eventually announced everything via press releases. This year, October 28 is the date for that same Monday so it makes perfect sense. I should also point out that invitations for last year’s event were sent out on Wednesday, October 17. That means that since today is Wednesday, you can expect to see invitations sent out today. All along, I have been thinking October 28 would be the day, and it looks like it will hold. Now just make the event in NYC and I will be a happy camper.

Come comment on this article: Nexus 5 and Android 4.4 Kit Kat appear to now be on tap for October 28