Nexus 6 vs Nexus 5: A civil war within Google 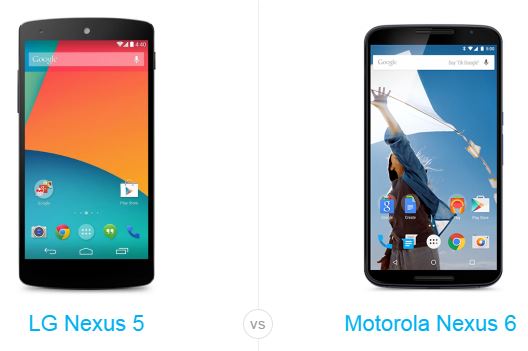 Ever since the announcement of the Nexus 6, we’ve been dying to know how it will stack up against other devices. While we won’t know for sure until we have our hands on one, we can at least look at the various specs. Lets take a look at the Nexus 6 vs the Nexus 5!

Let’s start with the Display. The Nexus 6 has a gorgeous display with a pixel density of 493 ppi, while the Nexus 5 isn’t bad either with a 445 ppi. However, considering the Nexus 6 is a full inch bigger than the Nexus 5, the Nexus 6 is a clear winner in the display quality. Motorola’s device has an AMOLED screen while LG’s offering has an IPS screen, so that’s a matter of preference. Is also worth noting that the Nexus 5 is still a regular phone with its size, whereas the Nexus 6 places itself well into the “phablet” category.

All in all, both devices have great specs. Google truly has done well in designing both of these  Even the Nexus 5 which came out last year holds its ground well, but the Nexus 6 has been updated immensely, so in terms of specs the Nexus 6 is the clear winner.

However there are two things to consider: the Nexus 6 is quite large with its 5.96″ screen. One will have to get used to the size of the Nexus 6. Otherwise, some people are simply not going to want a phone that large and will want to get the Nexus 5. The other thing to consider is the price. What makes the Nexus 5 so great is all the great specs you get for the price: $349 off contract. The Nexus 6, however, will be $649 off contract. While the Nexus 6 will be available through carriers for cheaper, you’ll likely need to lock into a 2-year contract to get that price, which to many is not preferable.

The post Nexus 6 vs Nexus 5: A civil war within Google appeared first on AndroidGuys.