There’s been an outbreak of ninja fever on the App Store of late. We’ve checked out rhythm games like Audio Ninja and Arcade titles like Ninjin. Now, it’s time for a little tower-defense ninja action. Come on, you know you wanted it, right? The developers at Eutechnyx smashed together everyone’s love of ninjas, samurais, and household pets to come up with Ninja Cats vs. Samurai Dogs [Free]. For the price of free, you get nine levels to explore these four, age-old rivalries. Drop the extra $0.99 and you can unlock the full game, with no further IAPs required. Love that.

When you start the game, you get to pick your faction. For me, the decision wasn’t too hard. I sort of like dogs more than cats, but I like ninjas way more than samurais, dogs or cats. So aligned myself with the ninja cats. I was pretty psyched to see these ninjas in action. In my mind, I’m picturing adorable and deadly. What I got were a few bland-and-blue alley cats dressed up in semi-ninja attire. It was a slight letdown. This is a lane-based TD game, similar to Plants vs. Zombies. So in the back of my mind, I was hoping to see some vibrant colors. However, the reality of this fictitious world is that feudal Japan probably wasn’t as vibrant as your average flowerbed or garden salad. Go figure. 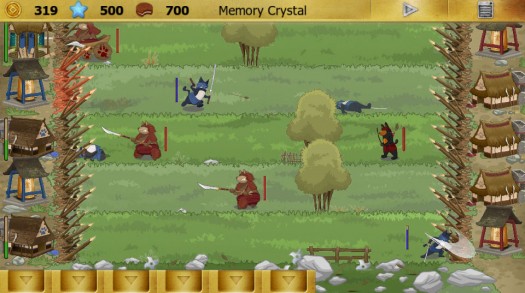 Visuals aside, there’s a lot of strategic depth to be found in this feline vs. canine version of the Tokugawa Shogunate. Of course, you’ll have to fork over the $0.99 first to really experience it. At the start of each stage, you’ll have five lanes to protect. Only the dojo is available in the beginning, which allows you to call out various troops. The library becomes available soon after, giving you the power to cast spells by playing various cards, such as lightning or healing.

The game gets especially hard about five to seven stages in since the locked missions are ultimately necessary to unlock stronger units. All of a sudden, dogs are riding on swift-wheeled chariots and lighting spells are setting your troops on fire, while your cats are lumbering around on foot with only swords and shuriken. It’s like bringing a stick to a gunfight.

Early on, your standard sword-bearing infantryman can take down a cavalry unit. However, if you run out of enough gold to purchase new infantrymen, you’ll see that same chariot race to your side of the field and destroy one of your building units. When you lose three building units, it’s game over. However, the game can mentally end for you when you lose your first building. If you decided to build only one bell tower at the beginning of the battle and it gets destroyed, you’ll have a hard time buying new troops since the bell tower generates gold. Sometimes enemies drop gold, but its not enough to survive when waves of enemies come crashing in. The same goes for the library and the school.

The game uses an RPG leveling system, which allows you to purchase a new skill every time you level up. Once you pass about level 6, you’ll start to enjoy the wealth of possibilities that Ninja Cats vs. Samurai Dogs has to offer. It almost has a touch Yu-Gi-Oh in it. Players can cast Black Holes, use magic mirrors to flip fires back on enemy troops and set traps that eviscerate their enemies. You can also do more tactical upgrades by playing training cards mid-battle. All of a sudden your blue-and-bland troops get a dose of acrobatic agility, while they’re hurling flaming arrows. 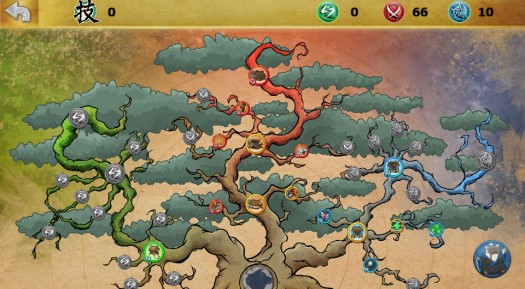 Now it’s only fair to warn you, these aren’t the brightest ninjas and samurais. Let’s say you cast a lightning spell and it starts a fire. The enemy will often turn around and walk backwards a few paces to avoid the fire. If they don’t have enough power or get trapped against a wall, they’ll burn to death. That’s all great. Now, let’s say that you had a standard infantry unit in the same lane. That dog or cat will run right into the fire and die the same painful death. Sometimes, it’s worth sending your troop through the fire if the lane is clear and you have a healing spell card on hand.

Ninja Cats vs. Samurai Dogs slowly became a treasured TD game for this player. Once I leveled up, I was totally hooked. This game has layers of strategic heart waiting to be uncovered. The tactical learning curve is steep, but once you get into it, you’ll never look at cats and dogs the same way.