Update: Nintendo started its trend of 'extra-large' DS models with the DSi XL back in 2010, turning an already incredible portable console into a larger, smarter, more accessible iteration. The 2DS XL and 3DS XL live on as its successors today, though we've kept our original impression of the impressive DSi XL below...

Say hello to the new Nintendo DSi XL. Coming one year after 2009's popular version of the company's handheld gaming console, the DSi, the new model features a notable larger screen and wider viewing angle – but the added size isn't just for show.

The Japanese gaming giant's top brass – CEO Satoru Iwata and game design genius Shigeru Miyamoto – have made a lot of noise in Japan about how the new extra-large DS should appeal to older gamers in particular.

Especially those consumers that buy up the latest brain-training games and are more likely to spend money on ebooks and other types of non-gaming software for the device.

But all of that marketing strategy talk aside, the true Nintendo fan really only wants to know one thing: 'Is this sufficiently better than the handheld I bought last year to enjoy Mario, Zelda, Metroid, Wario and all the other classic first party Nintendo games that gamers buy the DS for?'

After all we, most probably like you, have spent a good wedge over the last five years on DS consoles, from that first 'phat' grey Nintendo DS that launched (to widespread confusion on the part of Nintendo fans at the time) at E3 way back in June 2004 through to last year's DSi.

The original model was followed by the DS Lite in 2006 with its glossy white casing, slimmer form factor and four levels of LCD screen brightness, and then came the aforementioned DSi, which launched early 2009 in the UK and was again even thinner, with a slightly larger screen (and saw the end of GBA cartridge-support in favour of an SD card slot, AAC playback capability, and two cameras).

Having spent the best part of a fortnight playing through Zelda: Spirit Tracks on the new machine there is no question that it is Nintendo's finest handheld gaming console to date. The question as to whether it is £160 better than your current DS Phat or DS Lite or DSi, however, still remains… 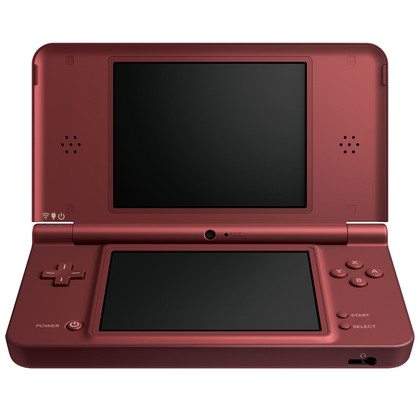 Both of the new colours of the Nintendo DSi XL – wine red and dark brown – indicate that Nintendo is no longer slavishly following the lead of the Apple iPod with a its glossy white sheen, as they were widely accused of with the first DS Lite console.

Both are also fairly conservative, a deliberate design choice to attempt to appeal to older users that are unlikely to go for bilious green or hot pink.

Perhaps the coolest aspect of the new DSi XL is the fact that the console has a matt finish on the underside which means that you can pop it on a table or pretty much any other flat surface for those extended Zelda sessions.

The DSi XL also comes pre-loaded with A Little Bit of... Dr Kawashima's Brain Training: Arts Edition and Dictionary 6 in 1 with Camera Function, as well as the Nintendo DSi Browser, which means that you can get online via the console's Opera browser wherever you have a free Wi-Fi connection.

And while the web browsing experience on the DSi XL is hardly going to give the iPhone a run for its money, it is the best internet experience yet on a handheld games console. A country mile better than attempting to surf the web with Sony's PSP. Which certainly counts for something.

One of the other nice touches out of the box is the DSi XL's larger pen-like stylus - perfect for the larger-fingered gent and a clear indication that Nintendo is properly starting to design its consoles for use by (western) adults and seniors.

The most obvious benefit here is, of course, that larger 4.2-inch dual screen which, compared with the 3.25-inch screen of our old DSi, really makes gaming on the DSi XL a lot more fun.

We have completed the new Zelda on this latest Nintendo handheld and going back to playing the same game on a smaller screen on a DS Lite or DSi is just not an option.

It is difficult to quantify, but if you like to get lost in Nintendo's (read: Mr Miyamoto's) greatest games, we would certainly say this latest large-screened DS was well worth the £160 investment (or whatever that price would be minus the trade-in value of your older DS).

Playing other recent classics such as New Super Mario Bros on the DSi XL only served to convince us that this device is something considerably more than an 'annual refresh' of a popular handheld rolled out by Nintendo in order to sell a few more units.

It actually made the game better and more fun to play. As well as looking loads better it became easier to judge jumps and distance on the screen – a vital component to any Mario title.

If pushed, we might suggest that the fact that the games are displayed in the same 256 x 192 resolution as they are on the DS Lite and DSi means that they appear slightly blockier on the DSi XL.

However, there is no way we would trade back to the smaller screen after playing on this. Though Nintendo fans will no doubt be hoping to see 2011's iteration of the DS feature a better resolution screen.

In addition to better visuals, the DSi XL has slightly better sound quality than its older brother, something that is sure to delight many public bus passengers in the coming years, as the kids whip out the new console on the back seat. 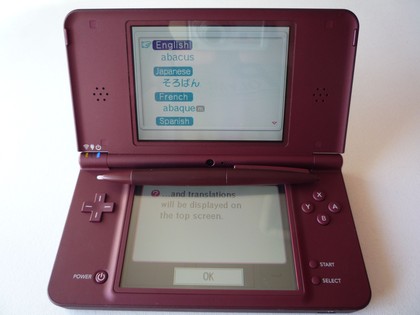 If you already have a DS Lite or a DSi and are an occasional gamer (or brain exerciser or virtual dog trainer) then you might not be persuaded to part with £160 for what is essentially the same machine – albeit with a slightly bigger screen, better sound and a larger stylus.

However, if you are the type of gamer that plays every new essential Nintendo DS release through from start to finish, you will immediately realise the need to upgrade to a DSi XL, because it just adds a lot to your gaming experience.

Sure, you might need slightly larger pockets to carry it around, but then the DSi XL's predecessors could hardly be described as pocket-sized.

The bigger screen, the crisper sound and the 'phat' stylus all appealed to us. Though we are not sure if this is because we fall into the 'older gamer' category (eyesight and hearing and basic motor skills all declining) or because we just like seeing Link and Mario on a larger, better screen. The latter, we like to hope.

The DSi XL means less hand cramps for adult gamers. One issue with the DS Lite and the DSi was the fact that you had to have the slim hands of a pianist (or the small hands of a child) to really be able to play it for any length of time. No longer. The DSi XL now means that even fat-fingered rugby lads can still enjoy pretending to be a squat Italian plumber for hours on end.

A bigger screen and a better stylus allowed us to achieve a better overall control of games, particularly where the perception of distance is key to controlling your on-screen character, as in New Super Mario Bros.

It's still fiddly to get online via your home Wi-Fi. Nintendo really needs to make whole process of getting this thing online a lot easier. The strategy is to sell mini-games via the internet, but that is not going to work if people get bored with the hurdles of connecting to their home router.

The slightly larger form factor means it is less portable. This is hardly a deal-breaker, because the DSi will only fit in the largest of combat trouser pockets, but compared side to side with the Sony's new PSPgo, for example, the DSi XL seems huge.

That 'wine red' colour – even though we are in the demographic that Nintendo is aiming to market the DSi XL to (ie old) we would still prefer 'iPod white' or glossy piano black. Whoever decided to plump for 'wine red' instead made the wrong design choice.

The DSi XL is the best way to play Mario and Zelda and Metroid on the bus to work to date, which effectively makes it the best handheld console yet developed

Plus the bigger screen means that we would actually consider using the DSi XL as an electronic reader and, occasionally, as a portable web browser.

We don't even mind throwing it in our bag, because the build quality is solid. This thing will not break unless you stand on it or throw it at a wall in anger.

For adult gamers it is a must, because it feels a hundred times more comfortable than the previous versions of the DS, which were essentially designed for children.

It just goes to show that smaller is not necessarily always better in the cut-throat world of consumer electronics and portable games consoles.