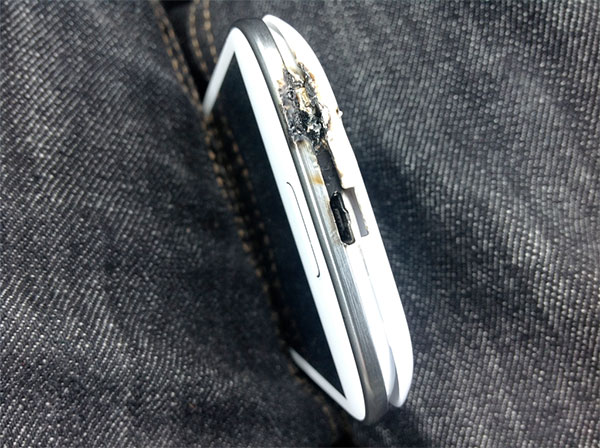 Remember a few weeks ago, when we reported that someone's Galaxy S III had exploded internally and melted straight through the casing? Well, folks, it looks like Samsung had a chance to get their hands on this device, and here's what they had to say about it:

Samsung contracted Fire Investigations UK (FIUK), an independent third-party organization, to determine the exact cause of the damage inflicted on a GALAXY SIII unit, which had allegedly been affected by heat.

The damaged device and additionally provided devices were examined and exposed to a series to tests. The investigation summary states that “The energy source responsible for generating the heat has been determined as external to the device” and “the device was not responsible for the cause of the fire.”

Additionally, the investigation results state, "The only way it was possible to produce damage similar to the damage recorded within the owner's damaged device was to place the devices or component parts within a domestic microwave."

Now, for those who don't recall, here was the user's original tale:

…suddenly a white flame, sparks and a bang came out of the phone. I pulled in to look at my phone, the phone burned from the inside out. Burned through the plastic and melted my case to my phone. The phone kept working but without any signal.

I brought it to the carphone warehouse and they told me that they couldnt replace it for me that they had to send it off to be checked out first. No even replacement phone, left with nothing.
The phone was destroyed and it slightly burned a piece of plastic on the inside of my car. And they are refusing to give me a replacement they had to send it off. Probably nothing I can do, but Im really annoyed. That could have burned the side of my face or through my pocket and my leg, or set fire to my bed. It’s very dangerous.

Tsk-tsk, young chap. Turns out this whole story was fake to begin with, and user Dillo2k10 has even updated his post on boards.ie, saying:

I would like to retract my original statement. The damage to the phone was caused by another person, and they were attempting to recover the phone from water this later caused the damage shown on the phone. It occurred due to a large amount of external energy and there was no fault with the phone. This was not a deliberate act but a stupid mistake.

So remember, folks. If your phone gets wet, don't nuke it in the microwave. But, if you do, don't blame Samsung. It'll come back at you.

Be sure to leave your thoughts in the comments.