Nokia Lumia 1020 Billboard: The most megapixels you can fit into a pair of skinny jeans (California) (+ O2 store 1020 promos) 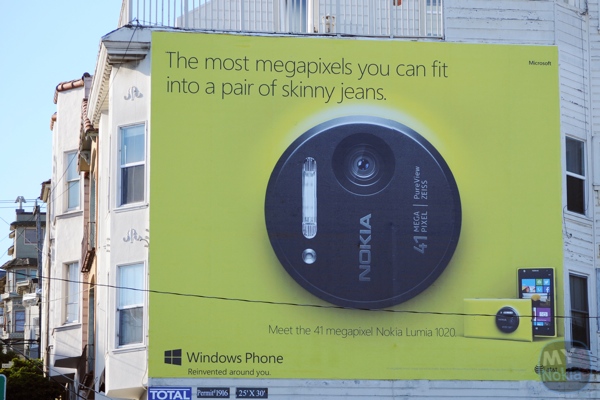 This picture was shared to us from California, Lombard Street. (Cheers anonymous person)

It takes an interesting stance that this camera has 41MP and it’s the most amount of MP you can fit in skinny jeans.

As someone who has unfortunately fallen for the skinny jeans trend (I blame losing some weight in the leg area) yes, 1020 fits in my jeans fine. BTW, there are “spray on jeans” for men now. I was recommended them yesterday as they didn’t have the regular stretch skinny in my size. They look like man tights. :/ Though  they are oddly comfy and roomy. I have to confess I do kinda already own some super skinny but by accident. They didn’t have any in my size and so I went from a 30 to a 26. Yeah, those don’t get used much. I generally don’t put anything in those pockets cos the outline is seen clearly (even something like a card).

Whilst we’re speaking of physical ads, at the o2 store in preston they had some Nokia Lumia 1020 ads playing. There was the cool video showing the 1020′s camera internals, another video which included quotes on how awesome the 1020 is and possibly something else. It did cycle between Nokia and iPhone but that was about it. I had to wait a few cycles to take this pic as people were standing in front of it. 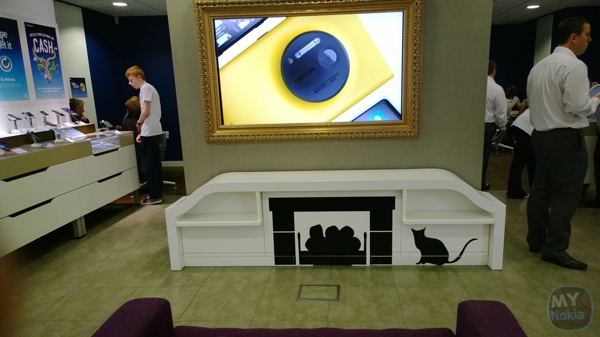 The Phones4U display still wasn’t showing much about the 1020 like the post from last week but they did have a little poster at the bottom. You can’t really notice it.

I think once people know that there’s a super awesome camera, with 41mp they get really interested. Last night, whilst getting ID’d, I got stopped by one of the bouncers at the entrance of a club after he saw me take a picture with my 1020. He was intrigued upon finding out this phone had 41MP (to which he oddly asked if it was a Samsung. Nay! Tis a NOKIA!) I got a picture of the other bouncer and showed him the detail to which blew his mind. He grabbed the phone and just played with the zoom, asking his other friend “what’s this?” pointing to a mark on his face “what’s that” pointing to something else on his face which he couldn’t see with his own eyes.

I’m not sure what goes on in the stores, but once people see a demo of how good the 1020 is, they get really interested. Yes, for those interested in apps, and certainly specific apps, you’d have to look more closely whether the 1020 is a fit for them. Sometimes, unfortunately they might not be. But for others where the main apps are covered, then it’s just about usability, user experience and then other differentiating factors (such as having an amazing camera).

BTW, I’m loving the 1020 camera for low light xenon. Awesome snapper for when people MOVE in low light! I loved the 920/925 for most pictures, but the brilliant DUAL LED isn’t enough to freeze in low light for this particular scenario. Plus, I find colours slightly better with xenon.  And it doesn’t look intrusive (aka an actual camera) so it looks great for spontaneous pics (could do with having faster start up times).