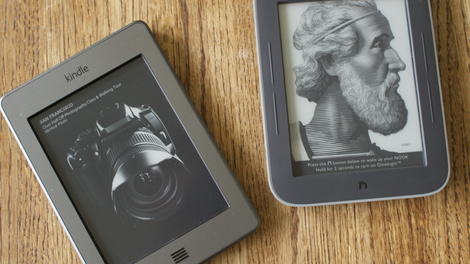 It seems like only yesterday that e-readers were the fringe choice for tech enthusiasts - and no one else. Critics and book lovers reviled the device. A book with batteries? Don't we stare at screens long enough?

But then Amazon released their new Kindle line - and starting at $79 it was close enough to intrigue even the most hardcore book lovers into - maybe just a chapter - of infidelity.

And lo and behold, they caught on and now everyone and their mom's moms are reading 50 Shades of Gravy on the beach, in the sun, without fear of the inevitable shaming a physical version's cover would cause.

While Amazone is clearly the leader in pearl e-ink readers, they're certainly not unchallenged. With the release of Nook's new Simple Touch with Glowlight, Amazon finally has a worthy contender. So which should you buy?

Hands down, no question about it, the Nook SimpleTouch with Glowlight is the best e-reader on the market.

It boasts a bigger battery, a faster refreshing display, hardware buttons AND touchscreen controls (Amazon forces you to choose between touch screen OR hardware buttons - no exceptions), and of course a backlit display.

No two ways about it, this backlight is the most impressive unchallenged feature of the Nook.

While traditional e-readers require an outside light source - like a physical page does - the Nook was able to purchase impressive backlighting technologies that make it possible to read in the dark - without interrupting any neighboring slumberers. The light on this thing is soft - it wont be any more annoying than an occasional phone glance at night - and possibly less intrusive.

In daylight, you can almost not tell when the light is on. This would be a problem if it weren't for that gargantuan battery - even with the light left on, the Nook can last for a very long time.

The Nook comes with 2GBs of internal storage, or up to 1,000 books. Unlike the Kindle, it also packs expandable memory, up to 32GBs, which is - a rough calculation here - all the books in the entire world.

The Kindle has a slightly larger amount of internal storage (or even more likely, smaller book sizes), as it holds up to 1,400 books.

Truthfully, the ease of downloading/deleting/redownloading on these devices makes the internal storage a bit of a moot point. It's not as if you're going to have any trouble fitting all your vacation books on the devices, but if you absolutely must have more than 1,400 books at any given time, the Nook is your best (only?) choice.

There's also the matter of refresh speeds - an area the Nook clearly surpasses the Kindle Touch. While flipping pages on the Kindle is hardly painful, the Nook's is quite a bit faster.

This is especially noticeable when you must use the device's software keyboard.

Depending on how you use your device, you can almost get away with never using the keyboard - on both devices you can buy books on your computer and beam them to your eReaders, scroll instead of search for your books, and write notes elsewhere.

The interface on the Nook and Kindle are a bit of a toss up - if you've grown accustomed to the way one does things, the other will certainly feel strange.

One clear benefit of the Nook is that it doesn't display ads. An e-ink display is a bit like an etch-a-sketch, and off is not indicated by a blank screen. Amazon chose to capitalize on this, displaying ads unless you paid an extra $20 to remove them from your screen.

By default, the Nook instead just shows caricatures of your favorite authors. These are surely better than ads for Pampers Diapers or whatever Amazon is showing on any given day (Today it's 53% off Salon Services in San Francisco), but they're still a bit tacky.

Fortunately, they can be changed to photos of Nature in the settings, or even upload your own photo to really personalize your reading experience.

To turn the Kindle on, you need to press the small power button on its bottom edge, whereas on the Nook you press the home button (or hold for 2 seconds to automatically activate the Nook's GlowLight) and then drag to unlock the device.

This drag to unlock presumably saves battery from accidental power-ups while the device is in your bag or purse, but it's a bit inconvenient we realize we're nitpicking here.

The landing pages of the Nook and Kindle are entirely different. Whereas on the Kindle you'll land on a long list of your purchased literature, on the Nook the home screen is a mishmash of what you're currently reading, what your friends are reading, and what's new.

This is good in theory, but what you'll quickly discover is that your friends are rather dumb, and the New Reads are always populated with newspapers (New York Post, The New York Times, and The Wall Street Journal, as of writing).

Navigation is easier on the Kindle, because it was built with the idea that everything must be accessible from a touch interface. The Nook instead makes you sort through panes by pressing the home button, which displays a column of tabs to click through.

This column is how you choose to get home or to your library or shop, how you search search, how you activate the GlowLight, or how you change settings - suffice it to say you'll be using it often.

All of the Kindle's features can be accessed from conveniently placed icons on the Home page (a shopping cart to access the store, a large tap to search button, and a Menu button for everything else).

Once actually reading a book, the Kindle Touch handles things a bit differently. Tapping in the top 25% of the screen reveals a hidden menu with the same top ribbon and a lower ribbon that allows you to change the font, go to a certain page, or access book particulars with an X-ray button.

This is all done similarly on the Nook, though it only requires you to quick tap the screen anywhere.

One area where the Kindle absolutely blows the sneakers off the Nook is in word definition. On the Kindle Touch, defining a word is as easy as long pressing it. This same long press on the Nook displays a ribbon on the bottom of the screen with Highlight, Add Note, Share, and Look Up.

Unless you have the lexicon of David Foster Wallace, quickly looking up words is one of the absolute best parts of reading on an eReader. The Nook's slower Look Up feature might not sound like a deal-breaker, but if you look up three or four words a page in a complex book, you're going to actively resent that extra corner tap it requires.

In the same way the Nook is the clearly superior device, the Kindle has the competitive edge in its ecosystem.

Books are easier to find, easier to download, and of course available through a service you already use - Amazon.

But where Amazon really wins in this round is through its Amazon Prime deal, which allows you to "rent" one book a month if you subscribe to Amazon's $75 annual Amazon Prime service (which you should definitely do, like right now).

There are over 145,000 books to choose from - and they're not all crap. It's the kind of feature that can honestly make you feel like you saved money buying a Kindle. Within six months of buying my personal device, I'd "saved" almost the same amount as the Kindle cost.

Book prices are fairly even on both the Kindle and Nook. You can expect to pay $10 for most books. Amazon does allow you to download older books for free while these cost $.99 on Nook, so if you're a fan of classic literature the Kindle might be your first stop.

The Nook Simple Touch with Glowlight costs $139 and comes with everything you could need: a micro-USB cable, a power adapter, and an anti-glare protective screen.

Neither of the Kindle devices come with wall-chargers and this can feel a bit like you're being cheap-skated. After spending almost $200 could they seriously not throw in the power adapter they charge $14.99 for?

Though the Nook is quite clearly the superior device, which device you choose should chiefly concern how much money you're willing to spend.

The Nook is more expensive than the Kindle Touch and it doesn't sweeten the pot with the awesome deals that are so easily accessible from Amazon.

Amazon also has the best way to buy books - whether online or from your device. Navigating the Barnes and Noble store can be a bit painful and you might lose interest before you buy a book, whereas on the Kindle you'll constantly be excitedly spending money on books you don't even have time to read.

While there are no easy answers, there are a few givens: the extra $50 Amazon charges for the Kindle Touch with 3G is not worth it. Books are downloaded so rarely, that you hardly even need to be connected to WiFi on a weekly basis.

If you're apprehensive about even getting an eReader, get the $79 Kindle. At such a low price, it's easy to spend the money without buyer's remorse and you can find if the value of an eReader is enough to warrant moving your library digitally.

On the other hand, if you're using an older Kindle or just ready to get a stellar eReader, we suggest either the Kindle Touch - which is absolutely excellent for navigation, or the Nook Simple Touch with GlowLight.

There is no better reading device than the Nook (that's right, not even a book!), and until Kindle releases its own backlit Kindle, this is the best you can do. Even so, you have a right to be squeamish about a ramshackle navigation system, a lack of Amazon Prime-style free books, and a less-than-inspiring storefront.