Note Edge To Get Lollipop In August 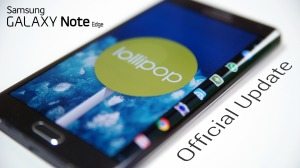 The Note Edge has been receiving Lollipop for a couple months now in other parts of the world but things have been pretty darn quiet here in Canada.  I’m not sure what the major delay was but we finally have a release window for Lollipop on Samsung’s first “edgy” device.

Rogers updated their update schedule recently and according to the most recent update, the Note Edge will receive Lollipop sometime in August.  While it’s definitely been a let down seeing others get Lollipop while we’ve been stuck on KitKat (so archaic, I know) there is some good news.  This update will bring the device all the way up to Android 5.1.1!

We don’t have an exact release date yet but if we come across one we’ll be sure to let you know.

Note Edge To Get Lollipop In August is a post from: Android in Canada Blog

The post Note Edge To Get Lollipop In August appeared first on Android in Canada Blog.