Samsung’s mid-range smartphone offering, the Samsung Galaxy A7 (2017), will likely be updated with Android 7.0 Nougat soon. This news comes after the Wi-Fi Alliance has certified a version of the device equipped with the aforementioned version of the Android operating system. Getting the said certification is important to ensure that there will be no Wi-Fi connectivity problems that will result from software bugs or driver flaws. The tested unit has the model number SM-A720F, which is the global single-SIM card version of the handset. While there is no certification yet for the dual-SIM version of the smartphone, it is highly possible that Samsung is also currently developing the necessary software for the device.

Once the Android 7.0 Nougat update reaches the Samsung Galaxy A7 (2017), the owners of the said device will experience the new features that Google has incorporated into the operating system. Some of these new features are related to improving the user experience of compatible devices. Among these improvements include the native support for split screen multitasking. The native support for split screen view allows for more applications to be arranged in the said mode, as opposed to the OEM-specific implementations of LG and Samsung. Notifications are also improved by the addition of a Quick Reply feature, which should enable the user to respond to messages without interrupting whatever they are currently doing. Under the hood, Google also incorporated new and improved features that should increase the device’s performance and battery life.

While the update has yet to roll out to the owners of the Samsung Galaxy A7 (2017), users may now start preparing their smartphones. Major updates to the Android operating system come in huge packages that usually reach more than 1GB. Thus, the device owner could start removing rarely used apps or previously backed-up photos just in case the handset lacks the necessary free storage. Once the update arrives, it is important that the smartphone has enough battery charge to last the entire update process. Moreover, the device should be connected to a Wi-Fi connection before downloading the update as doing so through a mobile data connection could use up the owner’s monthly data allocation. 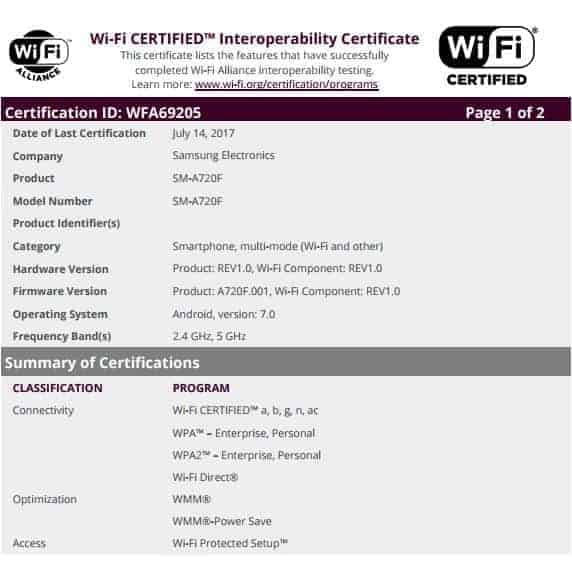