Now you can study the PS4 interface in minute detail 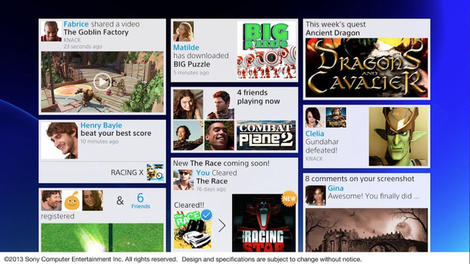 We may still be in the dark about what the PS4 console looks like, but at least now we know what it'll look like onscreen as a series of UI screenshots land online.

Confirmed by Sony as real, the screens show off a number of things including an achievements screen, news feed and a couple of shots of a phone and tablet streaming live.

Of particular interest is the Share screen, which shows the options you'll get when you hit Share on the DualShock 4 controller.

If you choose to broadcast video of what you're playing, others will be able to watch and comment as you play, as shown in the grab below with realistically terrible grammar.

We saw a few of these screens during Sony's big PS4 launch in February, but at least now we're free to pore over them in more detail - and for everything else we know about the PS4 so far, head on over to our handy round-up page.