An update today is bringing with it improved 4K content support on the NVIDIA SHIELD Android TV. In particular, support for 4K content available through Google Play Movies & TV. Which now brings Google’s movie & TV app more in line with the wealth of already supported 4K content available on the SHIELD, like for instance – Amazon Video, Netflix, VUDU, and more. This essentially brings full closure to an issue which was picked up on last year, following Google’s announcement that Google Play Movies & TV now lets you rent and buy titles in 4K. The issue seemed to revolve around the VP video codec level in use, with Google requiring a minimum codec level. One which, at the time, was not supported by SHIELD Android TV devices. Although that has since been rectified.

The Google Play Movies & TV 4K support is not all that is on offer today though. As NVIDIA has also confirmed that the SHIELD Android TV now supports 4K content that is cast from a SHIELD owner’s smartphone or tablet. A feature that will be of particular benefit to those who often make use of video apps on their mobile devices. In fact, to further highlight how the SHIELD now stacks up when it comes to 4K content, NVIDIA has released a new comparison – detailing the strength of the SHIELD’s 4K third-party app compatibility, compared to a number of other popular TV streaming boxes. Including the Apple TV, Amazon’s Fire TV, Google’s Chromecast Ultra, Roku devices, and so on. You can see the comparison in detail below.

Of course, now that the SHIELD is even more 4K-compliant than it was before, it still only remains as compliant as the rest of the setup. To be able to make use of 4K content fully, the SHIELD needs to be coupled with other 4K-enabled aspects. Which means not only the TV set that the SHIELD is connected to, but also the cabling that connects the two. That all said, if all aspects are 4K-compliant, then it seems the NVIDIA SHIELD Android TV (both the 2015 and 2017 models) now meets most, if not all, of your 4K streaming needs. 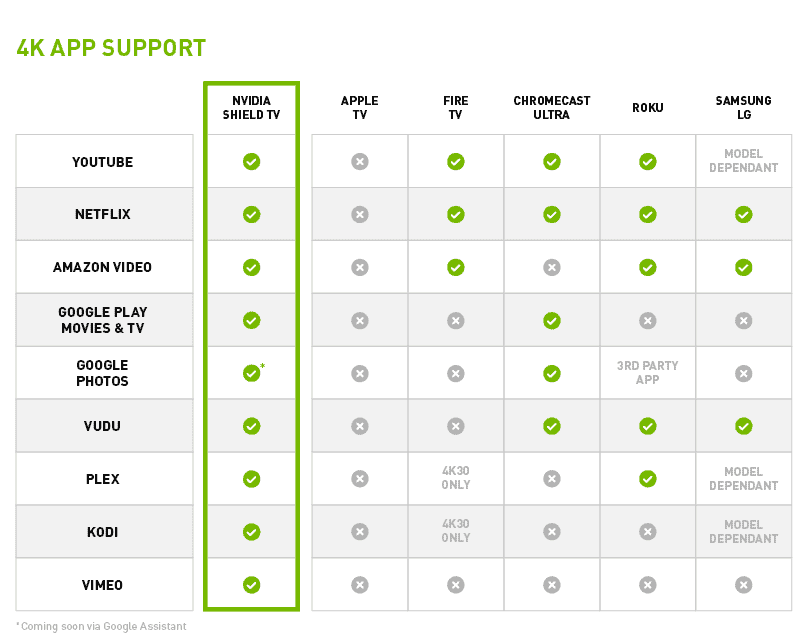