When Samsung launched the Galaxy S5 in February, earlier this year, many of the fans surprised because the company didn’t announce the Exynos sporting octa core variant of the phone. Shortly after the announcement, the rumours regarding the octa core variant started popping up. Even Samsung decided to to a little tease and then removed it after a while but it was pretty obvious from the start that Samsung isn’t going to hold back.

Now, we have our hands on some concrete information that the octa core variant of Galaxy S5 does exist and will be releasing pretty soon, though we don’t really have any information regarding the pricing and availability of the phone but we assure you that the phone will be priced similar to the Snapdragon variant of the Galaxy S5 and will launch globally as well. The confirmation is coming through a bunch of screen shots that are showing the AnTuTu benchmarks of the phone.

Let’s hope when Samsung lifts up the curtain and reveals the Galaxy S5 (octa-core) we’ll update you as soon as the official announcement and more details hit. 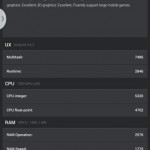 Thanks to GSMArena for the tip.