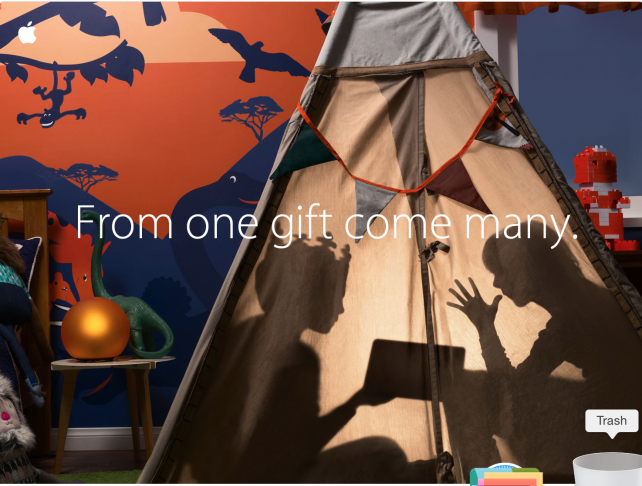 Earlier this week, Apple started decorating its retail stores for the holidays. Cupertino is now sprucing up the company’s online store. To help promote the updates, Apple has sent out an email to customers under the tagline, “From one gift come many.”

The email, which features the photo above, offers Apple store links for the iPad, Mac, iPhone, and Apple TV. It also offers links to the company’s photo services, and 2014 iTunes gift card options.

Inside the Apple online store, you will now find some colorful, somewhat eccentric photographs, like those shown below:

Another change: Apple employees will no longer be wearing their familiar lanyard badge holder. Without the lanyard there will be more emphasis on employees introducing themselves to customers, according to a video memo from Apple’s new retail head, Angela Ahrendts.

I’m not exactly loving the changes being made to Apple’s online store. Hopefully, things will get a little bit better oncethe holidays get closer.

An odd mix of photographs welcome customers to Apple’s holiday-themed online store is a story by AppAdvice.com
AppAdvice - iPhone, iPad, iPod, App Reviews + News
Get the latest tips & apps for your Smartphone