The official shipping date for the Nexus 7 charging and multimedia dock has been rumored for every date from here until then, and none of them have come to fruition. Google themselves have never given an official date, but retailer B&H Photo tried its hand at estimating the shipping date a few different times and hasn’t been able to meet them — it’s so bad, in fact, that the retailer has decided to stop trying to estimate the shipping date altogether. 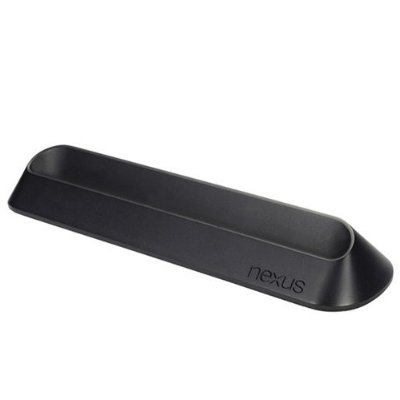 Well it looks like one merchant might finally be shipping the goods we’ve been searching high and low for. ExcaliburPC on Amazon is listed as having the accessory in stock. The asking price is $50, and while this is $10 more expensive than what we believe the MSRP is we imagine some folks have no problems coughing up an extra $10 to get a nice, new cradle for the affordable 7-inch tablet.

Amazon is actually showing that the device was originally $66.90 and that you’re getting a steal at this price, but we imagine the retailer only listed it this way to make it look more attractive in the eyes of desperate buyers. The accessory has already earned itself a review on Amazon.com, with one user awarding it four stars out of five (a point was docked for subpar USB host capabilities, apparently).

A few other Japanese merchants are said to be selling this accessory new, but don’t expect to come away with one for very cheap. These folks decided to inflate the price beyond $100, and we’re sure that’s quite unreasonable for most of you. I guess when you’re in a situation where the likes of Google itself isn’t listing the device for sale on the Google Play Store you’ll have to expect something like this to happen. If you’re tired of waiting and don’t mind spending an extra $10 to get a dock for your Nexus 7 then be sure to head on over to Amazon.