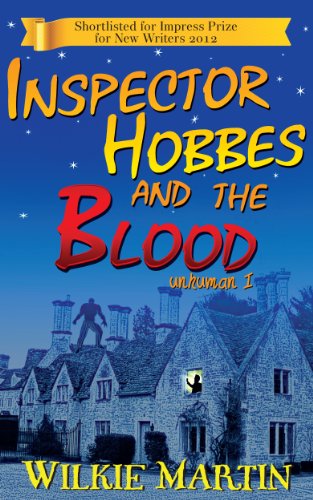 4.3 stars – 26 Reviews
Kindle Price: 99 Cents
One Day Only Sale! Regularly $7.99
Text-to-Speech and Lending: Enabled
Don’t have a Kindle? Get yours here.
Here’s the set-up:
Set in a small Cotswold town, Inspector Hobbes and the Blood is a fast-paced comedy crime fantasy about the adventures of Andy, an incompetent reporter, when he is reluctantly working with Inspector Hobbes, a police detective with a reputation. Andy soon finds himself immersed in a world where not everyone is human, and a late-night visit to a churchyard nearly results in grave consequences, and a ghoulish outcome. An accidental fire leads to Andy having to doss in Hobbes’s spare room. Contending with a wave of murder, suicide and robbery, as well as Hobbes’s weirdness, is the just the start; he must also get to grips with Mrs Goodfellow, Hobbes’s housekeeper, who collects teeth. Although they are mostly from humans, she also claims to have some vampire specimens. However, Andy soon finds her wonderful cooking compensates for her eccentricities.
Despite Andy believing he is coping, he is nearly unhinged by horror when a stressed Hobbes’s concealed nature reveals itself in an orgy of bone-crunching. Yet, coming through unscathed, Andy develops respect and admiration for his host, even when he uses weird, occasionally brutal, methods to begin unravelling the mystery, which would appear to link The Order of the Dragon and Vlad Tepes, the original Dracula, to the crime wave.When Hobbes goes missing, Andy, with the dubious assistance of Dregs, Hobbes’s big, bad dog, and armed with a leg of lamb, searches for him. Will he triumph over crazed blood lust and human sacrifice? Can Andy with Hobbes’s friends, a binge-drinking dwarf and a troll who looks uncannily human, save the day? And can Andy catch vampirism from false teeth?These and other questions may be answered in Inspector Hobbes and the Blood.
5-Star Amazon Reviews
“Once again a brilliant writer with a new twist in the world of the paranormal! MORE PLEASE! Very well written.”
“This interesting and amusing mystery features an ‘unhuman’ detective inspector who is intelligent, funny, loyal, by turns kind and intimidating, and always interesting…”