In the latest update regarding the so-called jelly scrolling effect of the OnePlus 5, OnePlus again claims there’s no issue and the effect is completely normal. This is the latest in a series of inconsistent responses the company has given on the matter so far. OnePlus previously said it would check things out to determine what was causing the issue. Then, it said that only a small number of users experienced this inconvenience, but everything was normal and there was no cause for concern. Shortly after, OnePlus reconsidered and said it would issue a software update to fix the jelly effect. The original equipment manufacturer (OEM) now went back to claiming that everything is normal, adding that the effect is actually perceived due to the user’s “persistence of vision.”

The so-called jelly effect refers to how visuals are displayed on a page when the user scrolls vertically. More specifically, the display doesn’t seem to refresh evenly and affects the smoothness of animations. It may not be a major issue, but many find it frustrating since the wobbling visuals can make it tough to read or keep up with the content on a page. Some affected users said that the effect might stem from the fact that OnePlus installed the display upside down so it could fit all components into the device. In that particular case, it would be a hardware issue rather than a software one, meaning the situation would hardly be fixable with any kind of OTA update. OnePlus even deleted its previous post about the software fix, including the one referring to the effect being a natural phenomenon. On the other hand, only some OnePlus 5 units seem to experience this jelly-like effect, so this upside-down-display theory might not be spot on.

The aforementioned phenomenon referred to by the Chinese OEM occurs when the brain registers the vision stream with a slight delay. People often experience persistence of vision when shifting between bright and dark environments, for instance, as it takes a while for the eyes to adjust. As some users point out, however, if the persistence of vision was indeed the cause of the so-called jelly effect, everybody would experience it more often and on more phones, not just the OnePlus 5. Save for this wobbly inconvenience, the smartphone itself is a powerful device offered at an attractive price point that some industry watchers predict will be a significant commercial success. 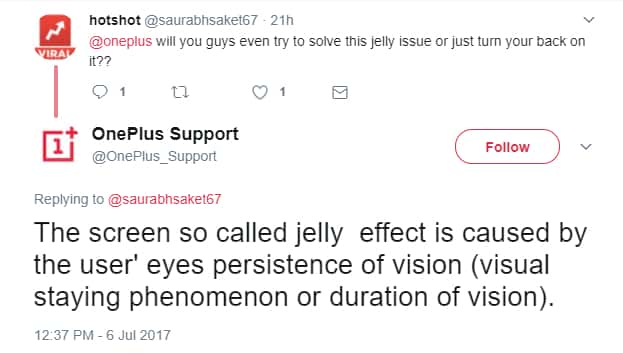