OPPO R11 Surfaces On AnTuTu With Snapdragon 660 & 4GB Of RAM

The OPPO R9 and R9 Plus were extremely successful smartphones for the company, and their successor, the OPPO R11, has just surfaced on AnTuTu. The OPPO R11 has been leaking out for a long time now, the phone’s design surfaced a number of times, and even though the ‘Plus’ variant is also expected, we’ve only seen the regular model. The device’s listing on AnTuTu basically confirmed rumored specs, so let’s see what specs will the phone sport, read on.

According to AnTuTu, the OPPO R11 will boast a fullHD display, and even though AnTuTu does not mention its size, chances are we’ll get a smartphone with a 5.5-inch display. The device packs in 4GB of RAM and 64GB of internal storage, while it is fueled by the Snapdragon 660 64-bit octa-core processor, along with the Adreno 512 GPU for graphics. Previous rumors said that the device will sport two 16-megapixel shooters on the back, and a 20-megapixel camera up front. Well, according to AnTuTu, a 20-megapixel snapper will be placed on the phone’s front side, but the site also lists a 20-megapixel camera for the back of this phone. This info is incomplete, however, as the phone will almost certainly come with two rear-facing cameras, so is it possible we’ll get 20-megapixel and 12-megapixel cameras on the back. Android 7.1.1 Nougat will come pre-installed on the phone, and on top of it, you’ll get OPPO’s custom UI, Color OS.

Having said that, we basically already know what will the OPPO R11 look like, in addition to several regular leaks, the phone surfaced in a leaked TV ad as well. The OPPO R11 will be made out of metal, and it will sport a front-facing fingerprint scanner, which will double as a home button, of course. It has been over a year since OPPO launched the OPPO R9, and the OPPO R11 is expected to land soon, along with its sibling, the OPPO R11 Plus, we still don’t know when exactly, though, but OPPO will probably start teasing the launch event of the OPPO R11 soon enough, and you’ll be the first to know once that happens, so stay tuned. 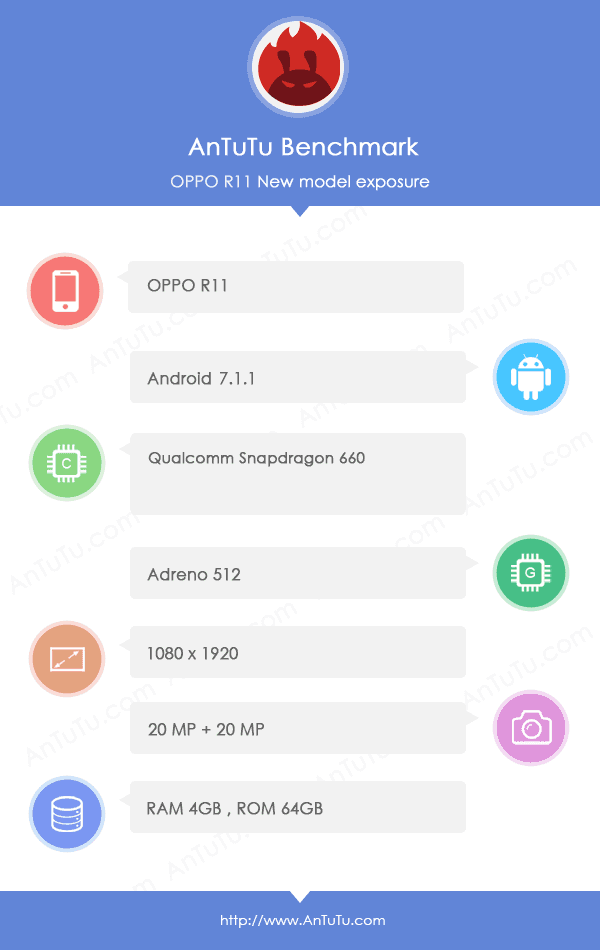 The post OPPO R11 Surfaces On AnTuTu With Snapdragon 660 & 4GB Of RAM appeared first on AndroidHeadlines.com |.