Oppo has become the phone maker you turn to when you want the best features without the alarming price-tag. We’ve said it a lot in the past, and it’s a niche that Oppo fills well, especially with the R15 Pro.

The last Oppo we reviewed was the R11s, and the R15 Pro is a clear evolution on that. It’s definitely the Chinese company's best phone to date, and takes a lot of design cues from Apple, Huawei and Samsung. If you’re going to be influenced by anyone, be influenced by the best.

In Australia, the Oppo R15 Pro is priced at AU$779. That’s amazing value when you consider the phone's premium design and features. While it's true that it's somewhat channeling the iPhone X in its design, it retains more of an identity than some other Android handsets, such as the Huawei P20 Pro.

Ultimately, this is an excellent handset for the price, with some of the best and worst aspects of contemporary phone design, and a number of quirks and characteristics familiar to Oppo phones. If you don’t mind all this, then you can save yourself a great deal of cash by grabbing this handset. 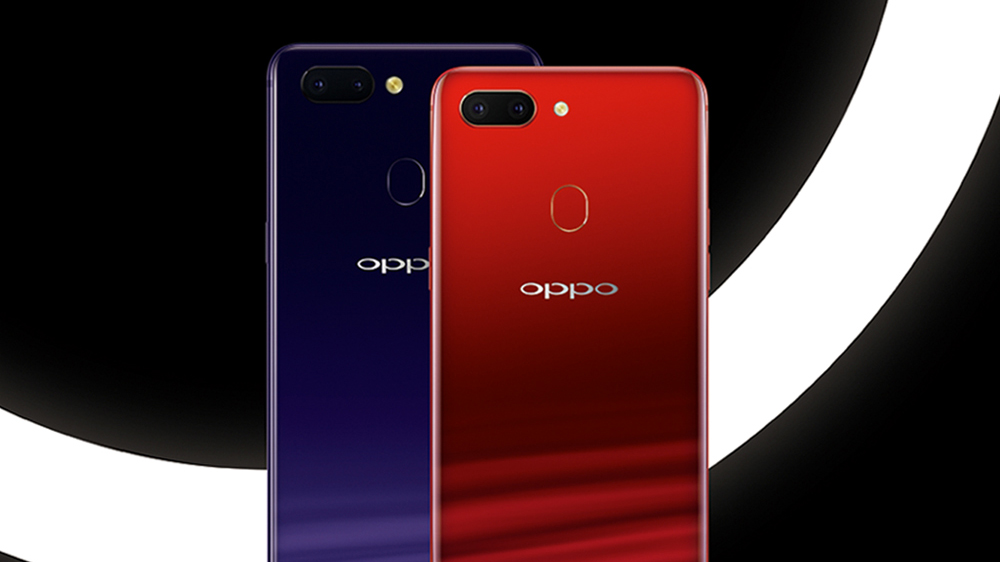 If you happen to live in a metropolitan area, you've likely seen the huge billboards for Oppo’s latest phone. Here’s a phone made for capturing the essence of the outdoors, they say, and there’s certainly truth in that advertising, but for a phone that relies so heavily on its camera, does it cut the mustard?

Before we dive into the quality of its snapper, let's see what the Chinese manufacturer has done to improve on its predecessor, the Oppo R11s, that only launched in Australia six months prior.

Features such as NFC connectivity and water-resistance (IP67) are welcome additions in the contemporary world of smartphones, sitting nicely alongside the handset's notch-touting display and dazzling all-glass rear. The increase to internal storage from 64GB to 128GB is also quite welcome.

Thanks to its notch and an even thinner chin bezel, the display takes up more than 84% of the phone's face, increasing it to 6.28-inches and cementing its place in phablet territory. 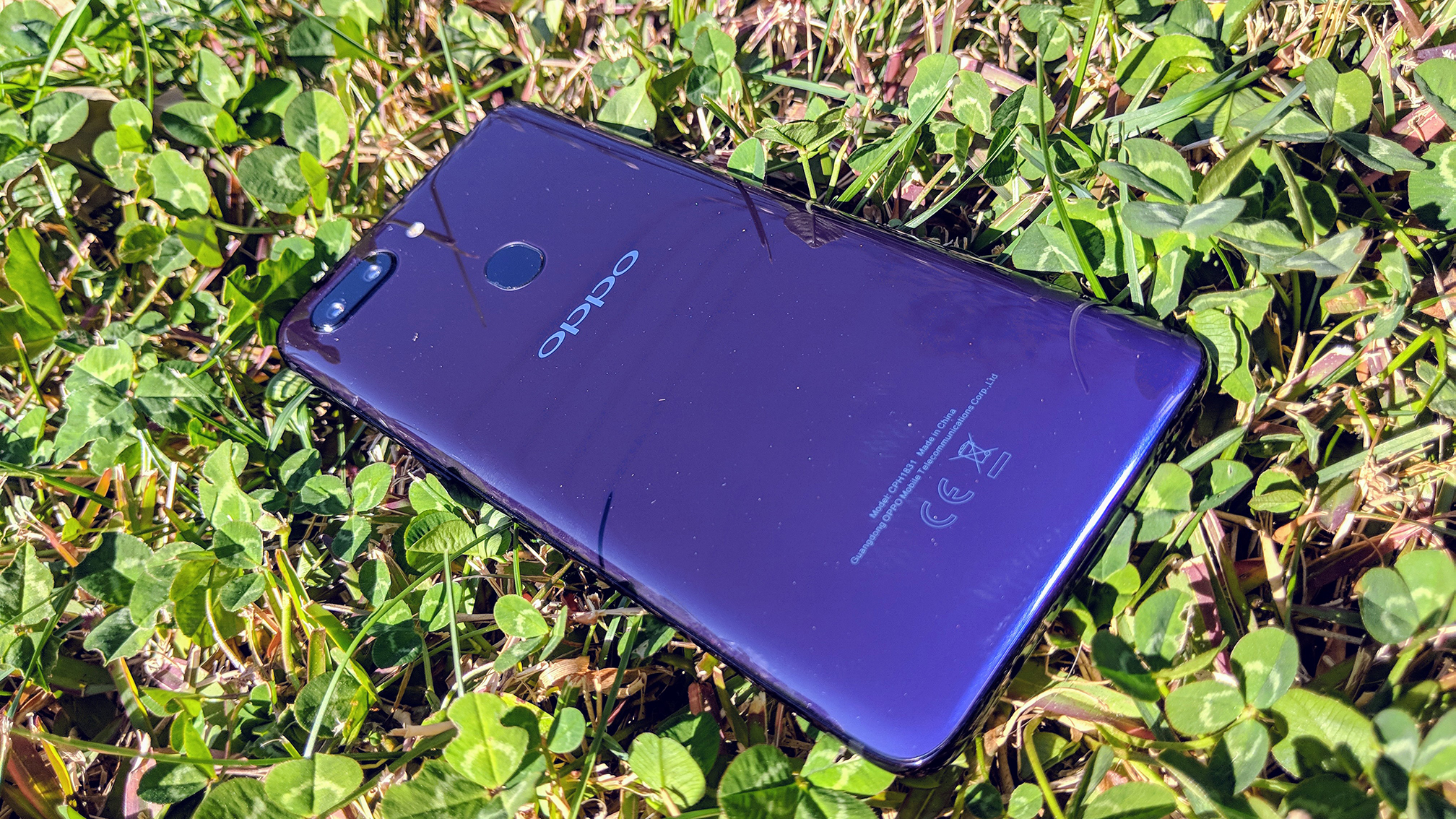 Unfortunately, not all of 2018's standard features have made it the R15 Pro, with a micro-USB port still found on the phone's base (albeit with fast-charging capabilities) and overall performance and battery life that doesn't quite cut it against some of its premium competition.

Similarly, Oppo's camera app can be a little obtuse with its array of quirkier modes and settings – beautification being a prime example – but this should come as no surprise to anyone who's used an Android phone from the likes of Huawei, Samsung, Google or any of the other major players in the last few years.

These somewhat niche settings and modes can be used to varying effect, but the phone's primary camera mode is where it truly shines. The dual lens setup makes for some truly wonderful shots, and along with HDR can bring a landscape to life or add rich depth to a portrait. 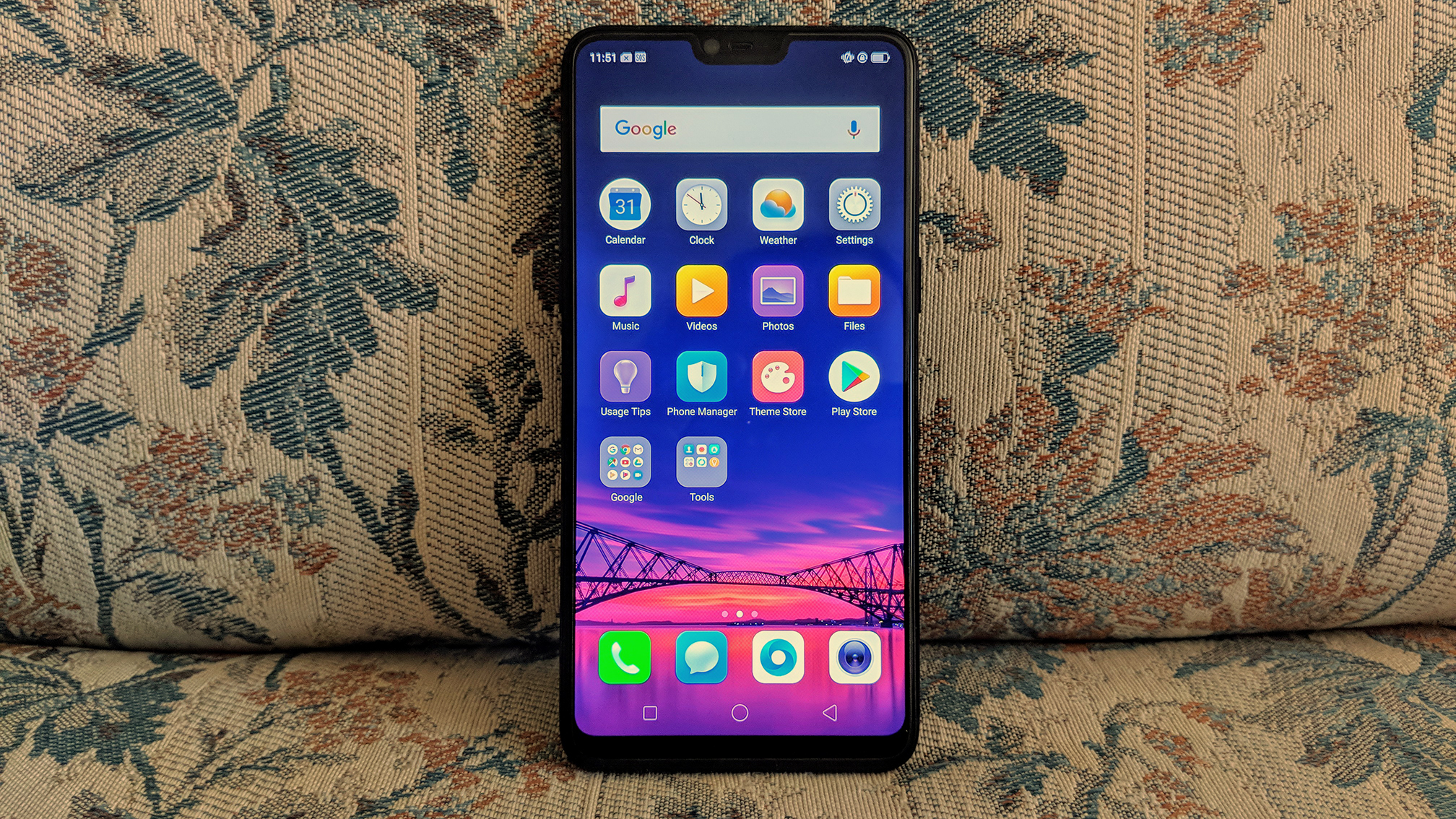 Aside from the notched display, the first thing you'll notice is just how handsome the chassis looks. We were able to test the handset out in both Cosmic Purple and Ruby Red, with each offering a different breed of iridescent shimmer that played with the light in subtle and tasteful ways.

Delicate curves and a comfortable weight make the phone a pleasure to hold, and the negligible camera bump can be mitigated with the included gel case, which adds more texture.

Thanks to the stellar facial recognition system, the screen will turn on from face down to firing in roughly 1.3 seconds. It’s near instantaneous if you use the rear-mounted fingerprint sensor instead.

Unfortunately, this is one of the areas where the Oppo is at its weakest. While the R15 Pro will get you through a day's usage fairly comfortably, it will be left with very little in the tank by evening and just won't cut it on those mornings you forget to leave your phone charging overnight.

It's clear that the gorgeous display takes its toll on the 3,430mAh battery, and it's likely that other missed optimisations are to blame here as well.

From our benchmark results, it seems that the R15 Pro scored lower than almost every handset we've reviewed in the last two years, performing equally as poorly as the HTC U12+.

For comparison, the PCMark Work battery benchmark had it scoring 6:11 hours, while the Huawei P20 Pro scored 9:46 hours, the Samsung Galaxy S9 7:44 hours, and the Motorola Moto G6 8:06 hours.

If you are feeling the pinch, the included fast charger offers 50% charge in 30 minutes, but as we mentioned earlier, this is via a micro-USB port rather than USB-C, which is a little disappointing at this stage. 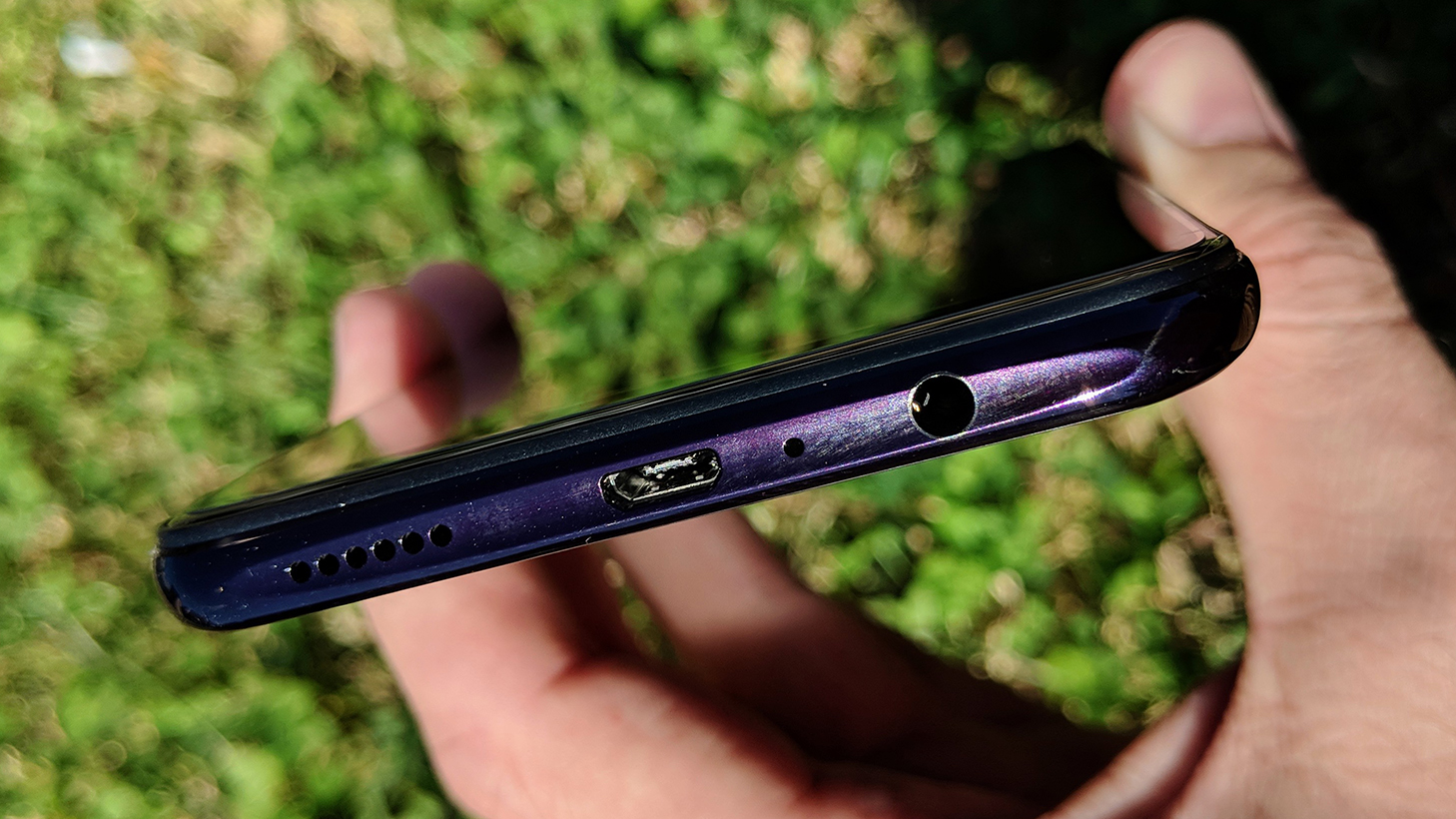 All in all, the Oppo R15 Pro's camera is a winner. It takes winning photos in natural light. Switch the HDR (High Dynamic Range) option on the rear-facing dual lens camera and you will be amazed by what you’ve just captured.

Our landscape shots blew away last-year’s champion, the Huawei P10 Plus, with truer to life skies, clouds packed with intricate details and reflections in the glass of an adjacent building.

It’s fast, too, with the phone's speedy camera proving responsive to taking shots and video. However, there's a small amount of adjusting to the software in order to emulate tricks like the aperture effect that blurs the background while keeping the foreground in tight focus.

That’s found under the portrait mode, and in there you’ll find a number of gimmicks to alter the lighting, as well as some fancy augmented reality effects. There’s also the skin-smoothing beauty modes we've come to expect (helpful when you’re feeling a bit dusty), but that can be turned down or off.

The R15 Pro’s selfie prowess is a bit questionable, however, with a slight lack of definition, resulting in images feeling a bit ‘fudgey‘ – that is, unless you have the beauty mode on and the phone half an arm’s length away from your face. Best you stick to the rear lenses.

Our technical benchmark tests revealed this to be a deceptively powerful phone given its price point, especially in our CPU-intensive tests.

Despite the Qualcomm Snapdragon 660 chipset being the same one Oppo used in its R11 and R11s handsets, it definitely still holds up and comes out swinging against the Huawei P20 Pro, scoring roughly the same in both Geekbench 4 and PCMark Work performance tests.

This, paired with 6GB of RAM, will make everyday use and multi-tasking a breeze, and while the Adreno 512 GPU is definitely capable of moderate media and gaming use, it's a little more indicative of the AU$779 cost. 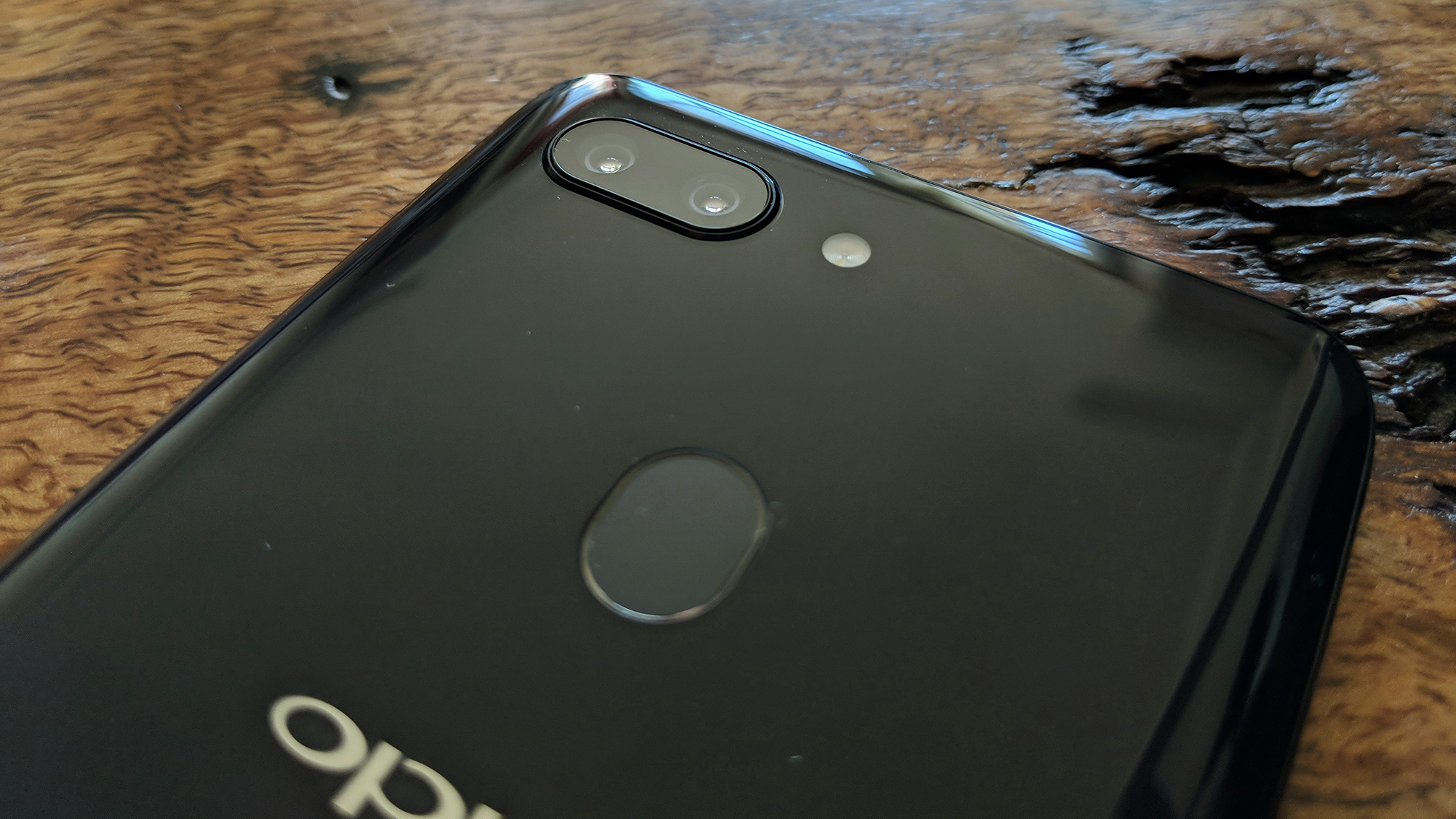 As for the user interface, Oppo's ColorOS is back with version 5.0, and it's just as Apple-aping as ever. This isn't necessarily a detractor, particularly for those looking to jump over from iOS, but for those who are chasing a pure Android experience, Oppo isn't the company to go with.

There are features here that are shamelessly ported from iOS, such as the "assisting ball", which is identical to the software Home button that many early iPhone users would have grown accustomed to using after breaking their hardware button.

As a result of Oppo splitting the difference between the two competing core operating systems, there's going to be a learning curve for users coming from either direction. Regardless, it's intuitive enough to adapt to relatively quickly and is a nice upgrade for existing Oppo users, who will quickly feel at home.

Oppo's R15 Pro excels in some of the more significant areas, with an awesome screen, camera and performance, and if you're a fan of the contemporary glass-back design, then there are few handsets that pull it off as stylishly, thanks to its iridescent gradient.

However, the inclusion of a micro-USB port feels distinctly backwards considering the near-unanimous move in the industry to USB Type-C, and while it does support fast-charging, the underwhelming battery life means you're going to need it.

If a few of the minor details were paid more attention then this would have been much easier to recommend wholeheartedly, but the end result is still an incredibly solid and stylish smartphone for the price. 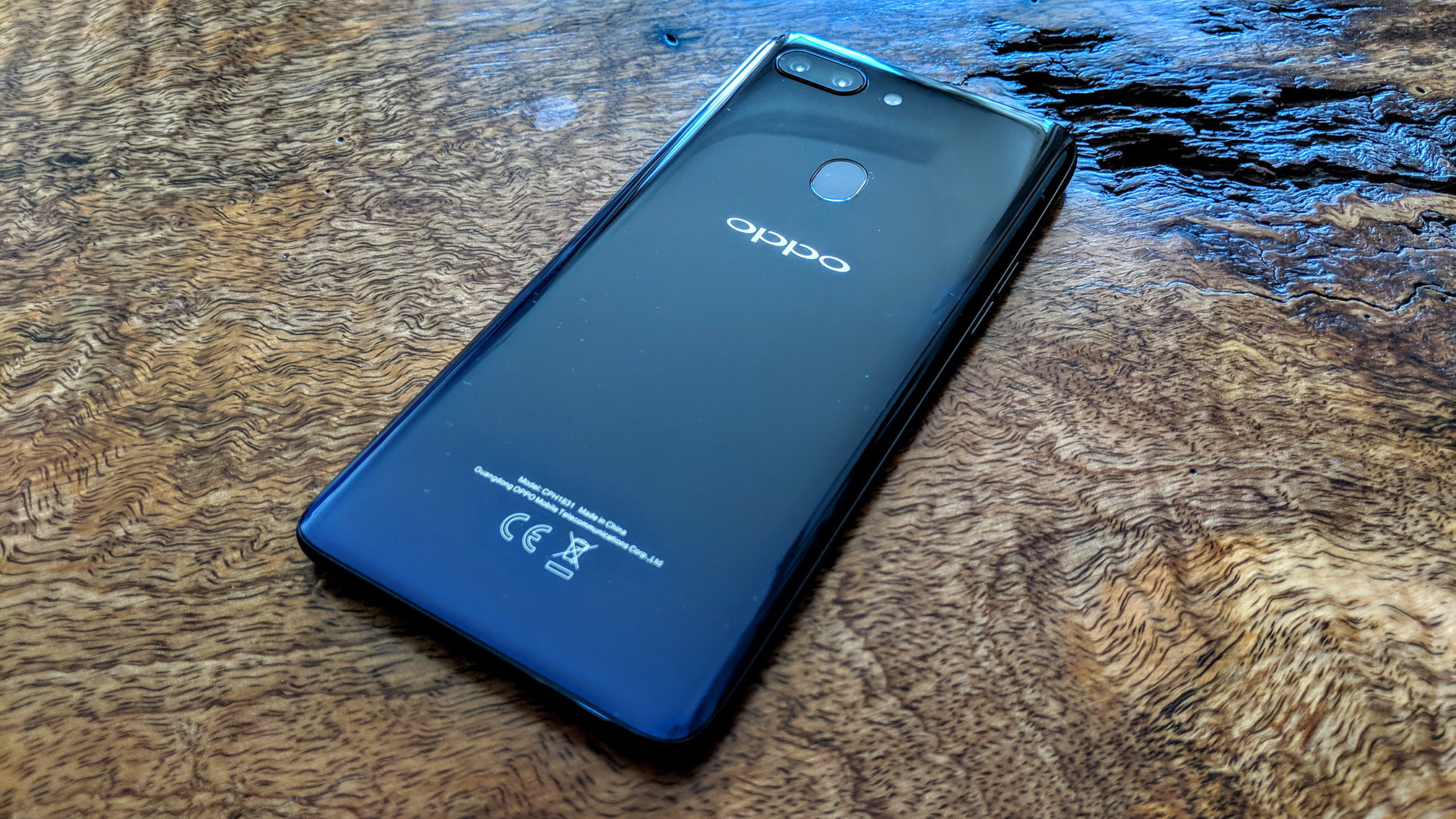 Thanks to its ColorOS, Apple users looking to move to an Android handset will have a much smoother transition with the likes of Oppo. In fact, anyone looking for an approximation of the iPhone X will find this stellar alternative for a thousand fewer dollars, and you'll be getting a snazzier colour option to boot.

Similarly, this is perhaps the best all-rounder we've encountered at its price, which at AU$779 is perching somewhere between mid-range and premium when compared with other manufacturers' offerings, but is one of Oppo's most expensive phones. 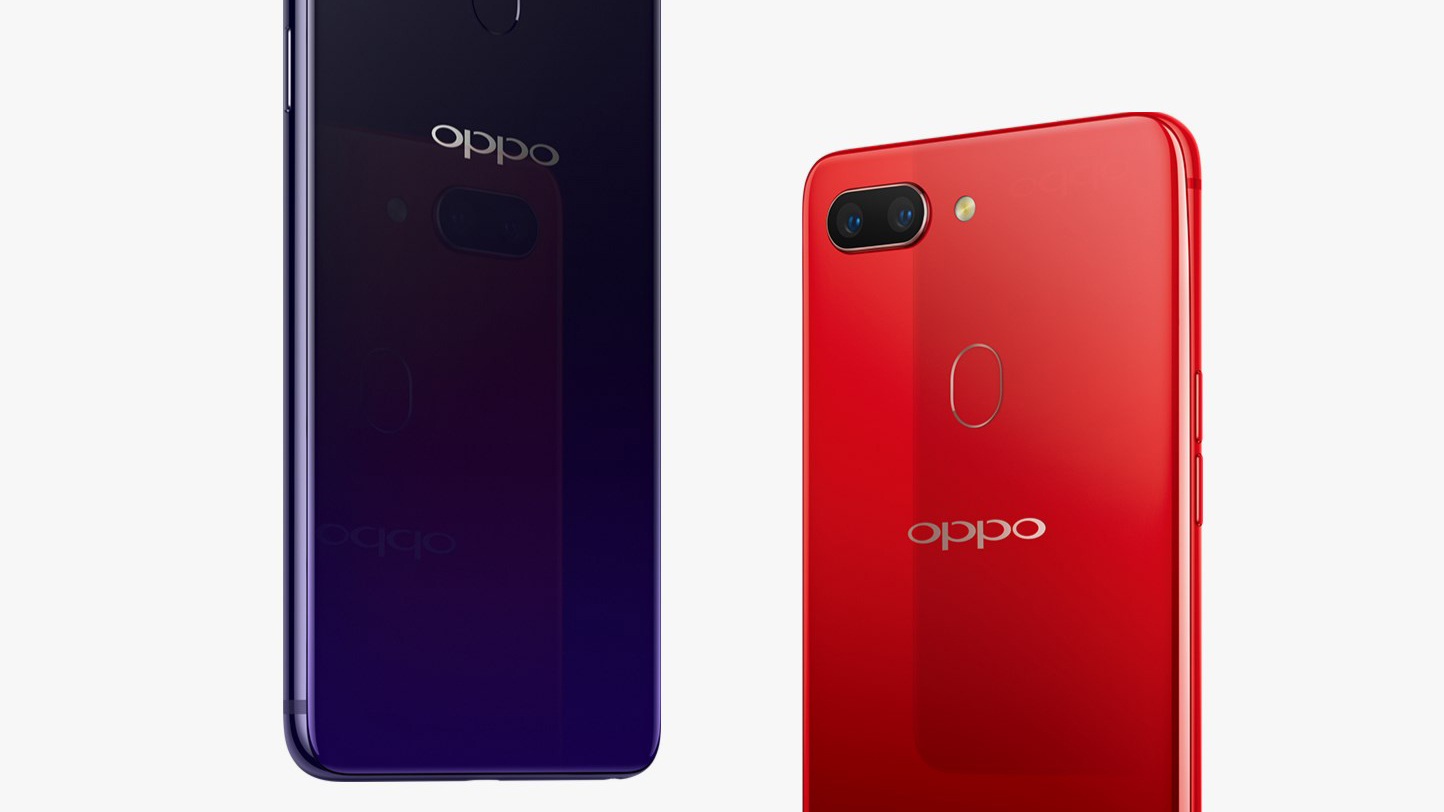 In short, yes. The Oppo R11s was one of the best mid-range handsets we've tested, and the R15 Pro improves upon it almost every way. If you're not deterred by a micro-USB port or weak battery performance, then there's little else (if anything) in this price range that compares.

However, if you're just after the modern aesthetic on a budget, then there are some excellent mid-range handsets by the likes of Huawei and Motorola that will save you some dosh, and if you're after absolute top-of-the-line performance, you'll need to throw a few more hundreds in the mix.

Although we'd recommend the Oppo R15 Pro to those looking to spend around $700-800, here are some of the best handsets either side of that bracket. 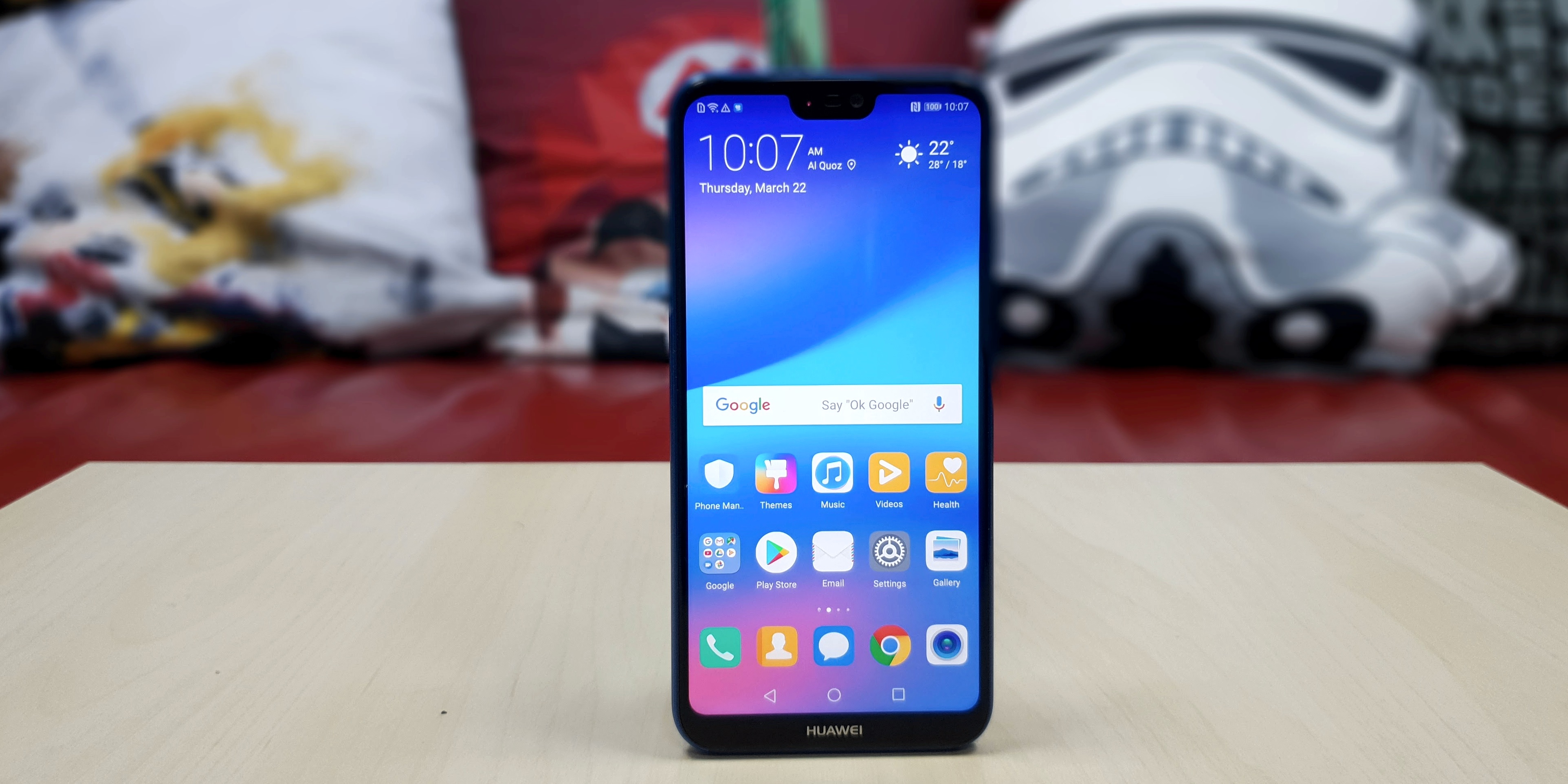 The Huawei Nova 3e is probably the cheapest viable handset you're going to encounter with the notched display and glass-esque rear of its premium competition.

At only AU$399, this packs in all the performance you'll need for day-to-day tasks, along with a wicked dual lens camera and other neat features from its older siblings, the P20 and P20 Pro. 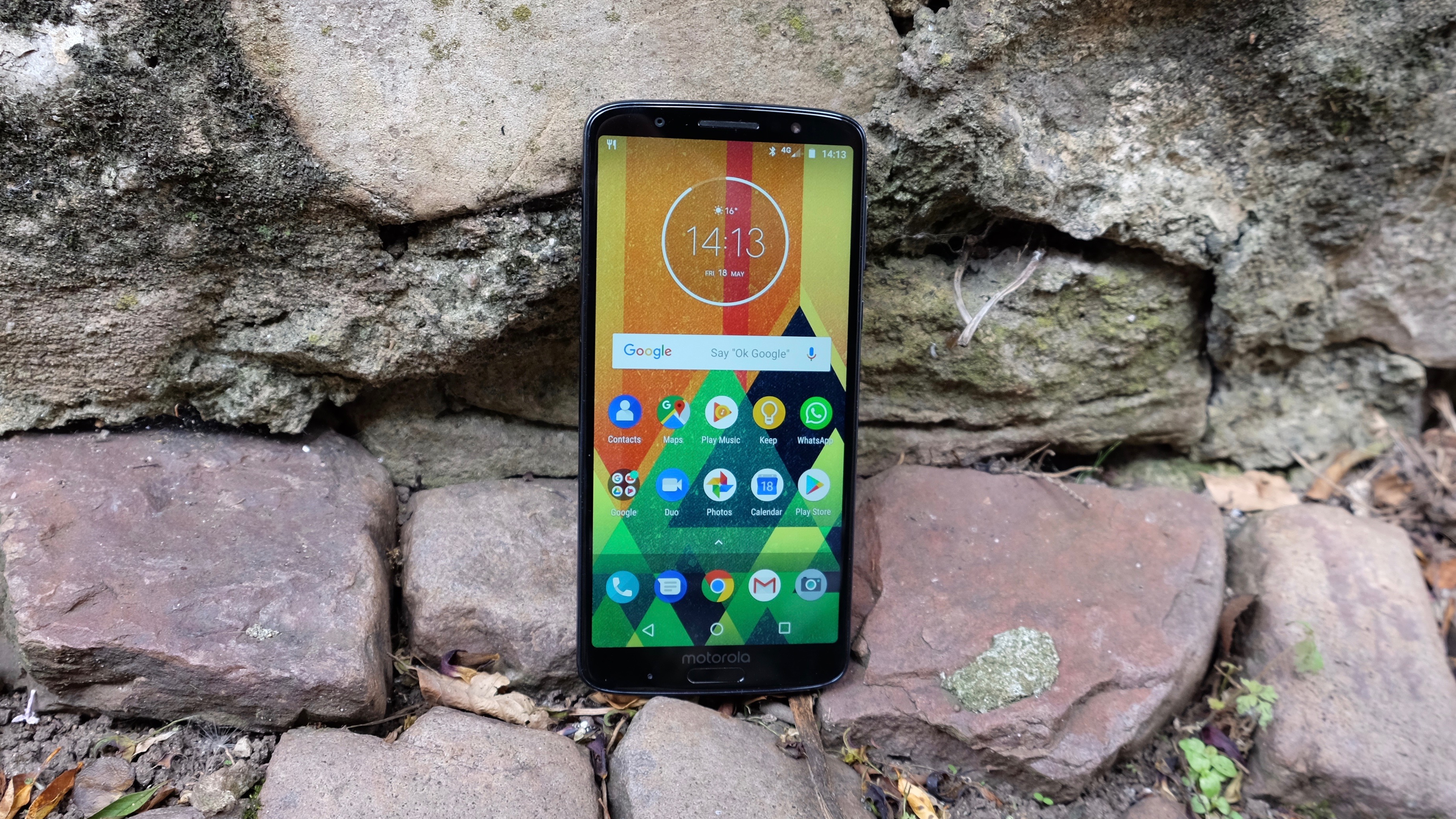 Although it doesn't offer quite as solid value for money as the regular Moto G6, the G6 Plus improves on it in every way and edges closer to the performance and screen real estate of the Oppo R15 Pro.

It's 5.9-inch display is lacking a notch, but you'll get a real glass rear and taller 18:9 aspect ratio for its FHD+ (1,080 x 2,160) resolution. Its Snapdragon 630 and 4GB RAM combo is no slouch for the price as well, making this an excellent mid-range phone for those that want a little more power and screen. 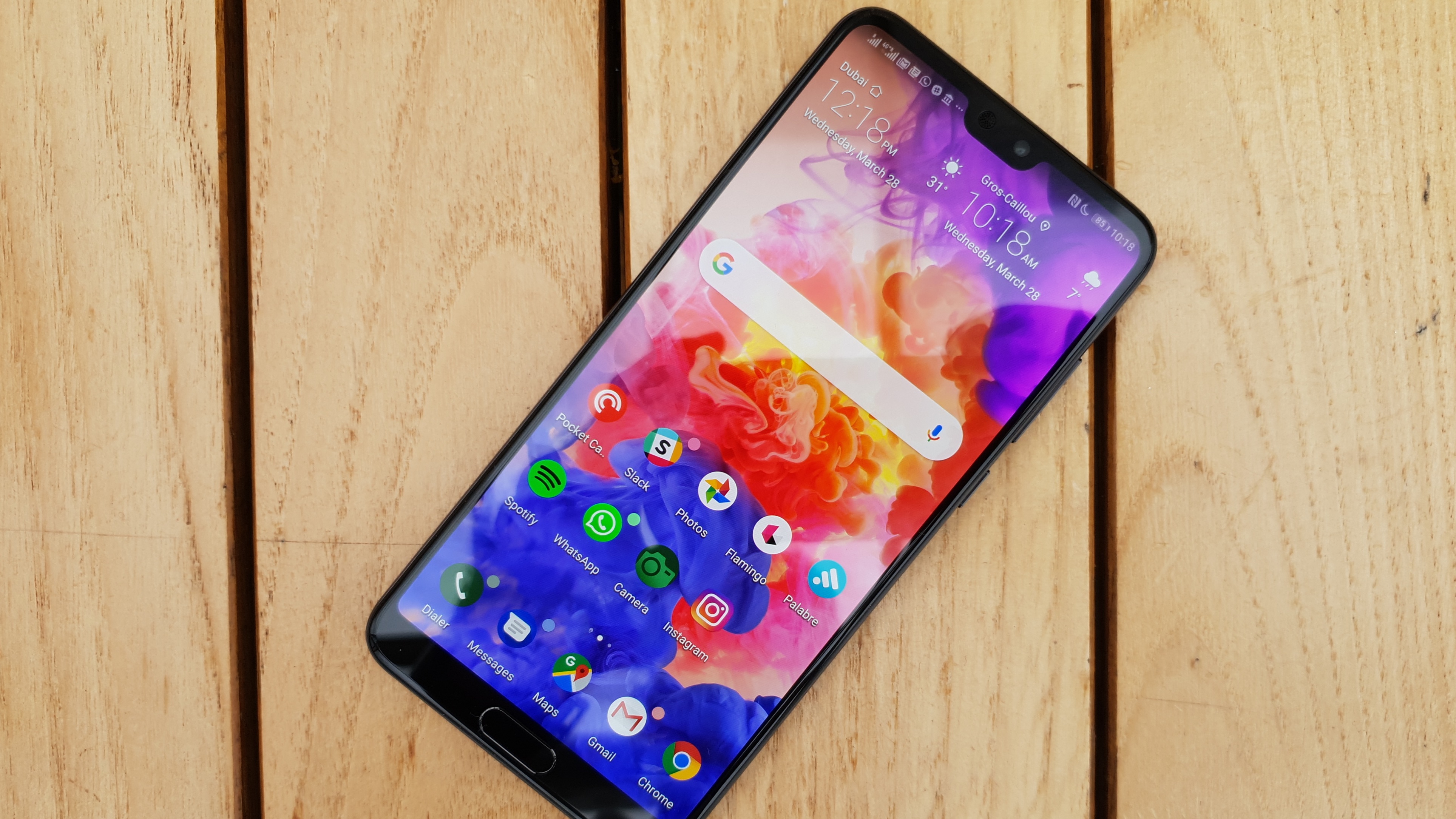 If you're at the other end of the spectrum and want to drop a few extra dollars on your Android handset to eke out more power and premium perks, then the Huawei P20 Pro is the closest competitor you'll find in Australia.

Its awesome 4,000mAh battery performs admirably and can even last through two days of usage, while its Kirin 970 CPU and 6GB RAM combo zip through everyday tasks. The pinnacle of Huawei's design philosophy is its cameras, and this triple snapper setup in partnership with Leica is as impressive as ever.