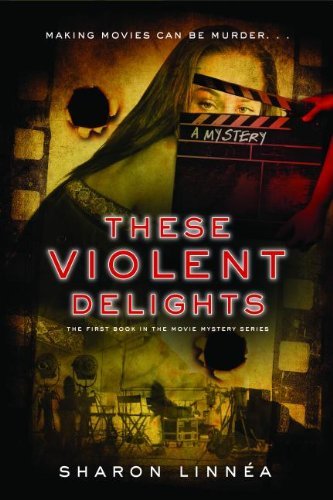 Kindle Price: $4.99
Don’t have a Kindle? Get yours here.
Here’s the set-up:
At once sexy and thrilling, These Violent Delights sets the stage
for deadly romance and chilling mystery. Beautiful actress, Anastasia
Day, is a prisoner in her dead husband’s castle, trapped by her fears
of the outside world. As plans unfold for the 20th anniversary
of her most famous movie, Tristan & Isolde, she realizes
how many members of the cast & crew have met untimely deaths. Can
Anastasia face her agonizing terror and discover what really happened
during the turbulent filming of the steamy movie? Can she stop the
murderer before the re-release reunion becomes everyone’s final
curtain? Written by best-selling author Sharon Linnea, These Violent
Delights will leave the reader breathless … until the next Movie
Mystery.