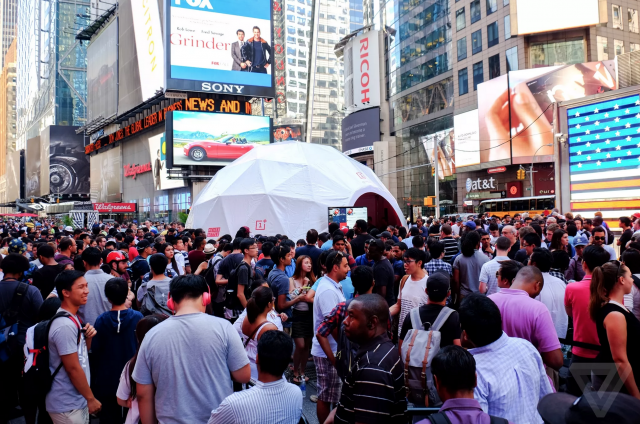 After officially unveiling their latest flagship — the OnePlus 2 — only a few days ago, we watched as the the phone’s pre-invite waiting list hit 1 million+ signups. We have to admit, it was a little surprising. While less trusting individuals might assume those numbers were artificially inflated to keep up appearances of high demand and further push the hype train, it looks like there are a good number of people legitimately interested in the phone. At least interested in looking at it.

OnePlus is hosting a handful of “popup experiences” in major cities around the world — New York City, San Francisco, London, Paris, Berlin, Milan, New Delhi, Bangalore, Jakarta — giving fans an early look at the device and giving away a few invites in the process. They somehow managed to erect a tent in the middle of Time Square where they’re sure to get the most traffic, with OnePlus co-founder Carl Pei on hand to talk to press and attendees. It’s not often we see OnePlus’ grass roots marketing in the real world, with most of their press releases and adverts happening online like their social media accounts.

While criticism over OnePlus’ use of the “2016 flagship killer” tagline could seen as overly ambitious to say the least, it does appears that there could be some some real-world buzz over this phone. At least initially. But in a world where we’re used to only seeing people line up for the latest iPhone, that could be saying something.

Join these NYC fans at our Times Square pop-up experience, and see the #OnePlus2 in person #NeverSettlepic.twitter.com/sBojfmhGHp