Alluring Lady Luck:: Inspired by a True Story by the man Behind the most Exclusive High-Stakes Gaming party jets to Casino around the World. 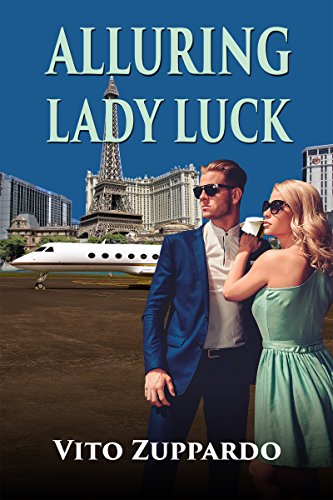 4.4 stars – 6 reviews
Kindle Price: 99 cents
Text-to-Speech and Lending: Enabled
Enjoy Vito Zuppardo’s Books? Tell us Why and Win a Free Book!
Don’t have a Kindle? Get yours here.
Here’s the set-up:

If you like New Orleans and Las Vegas you’ll love the places this book takes you.

“My adventures took me around the world as I made sure the most extravagant high rollers on the planet got everything they wanted: plush suites, private jets, and limousines. Every luxury and amenity you can imagine (including various unmentionables). And, of course, I made them pay dearly for it. Their compulsion was my opportunity, and I fed their addictions like a drug dealer.”

ALLURING LADY LUCK features PETER FRANZELLA, a casino hotshot who begins playing cards when he’s only 9 years old. By the time he’s of age, Peter knows every gambler in town: doctors, lawyers, judges, politicians, and bookmakers. And he knows he’s going to capitalize on it.

Peter’s first big break comes from the Stardust Hotel and Casino in Las Vegas. Unbeknownst to him, it is operated by mob bosses, and he directly worked under FRANK “LEFTY” ROSENTHAL (the inspiration for NICHOLAS PILEGGI’S book “Casino”).

Nevada Gaming calls Peter one of the most successful agents in Vegas when he produces 60 million+ in revenue in just three short years. But allegations of unethical mafia associations put his business and marriage in jeopardy—and one of Peter’s friends and business colleagues, a fellow gambler named Julie, has just gone missing.

Peter’s wife CLAUDIA isn’t excited about the gaming business at first. Her priority is family, but she too is lured into the lifestyle of private jets, hotel suites as big as a house, and everything else Las Vegas had to offer. All she must do is keep the high rollers’ wives happy while the casino empties their husband’s pockets.

JULIE KAPPERMEN, a charter airline broker, leases Peter airplanes and is a gambler herself. Peter quickly learns that she has Mob connections in New Jersey but isn’t concerned since it is benefiting him and he has no contact with them. But things go astray when Julie, who owes the New Jersey Mob a lot of money, disappears, causing Peter concern and making him scramble for airplanes to cover his flights.

Out of desperation, Peter’s trusted bodyguard/associate MOE CAPELLA comes up with an idea to replace Julie’s airplanes. But that plan backfires and causes another investigation into Peter’s operation. This time, spearheaded by Nevada Gaming Control and the FBI. Peter faces more scrutiny after a man that owes the casino money is found shot to death. And, yet again, when another gambler is found dead, hanging from a bell high above a church cathedral.

Peter has always lived a high-stakes life, flush with luxuries like five-star hotels, private jets, and limousines. But now his addiction is taking over his life, and it might be too late to win it back.

There are more twists and turns than a roller coaster in the final showdown with Peter, his wife, and the powers that be in Las Vegas.