Do we have a good one for you today – the Google Pixel takes on the new BlackBerry KEYone. These two smartphones are both a breakout design for Google and BlackBerry. Google did away with the Nexus name and started down a new path with its Google Pixel line in an effort to expand their ecosystem. It is the first device to include Google Assistant built in and it can send requests to Google Home. It is a polished glass and metal design with a rear-facing fingerprint sensor. The BlackBerry KEYone could be the beginning of their smartphone rebirth if they play their cards right. The KEYone uses the old-style BlackBerry keyboard that hearkens back to days of the Curve. It has an all-metal body that curves around the edges and a soft-touch back, which together make it easy to hold. Let’s look at just what these two devices have in common, if anything, and then we will take a closer look at each one in hopes that we can determine a winner of this comparison.

Despite their differences, we can find some common ground between the Google Pixel and the BlackBerry KEYone. The displays of the two devices are 0.5-inch different in size, but the larger Pixel is smaller in physical size – due to the KEYone’s physical keyboard – and weighs in at 37 grams lighter than the KEYone. The displays use different technology, the same resolution, and the same Gorilla Glass 4 for protection. They both use a Snapdragon processor and Adreno GPU, but different models. They both pack the same base amount of 32GB of internal storage, but only the KEYone has an expandable memory via a microSD card. With the Pixel, you can buy a 128GB model if you need more memory. The primary camera areas both use the same 12MP primary camera, although the KEYone does not have the laser focus. Both front-facing camera (FFC) areas use an 8MP lens, with slightly different specs. Both have a fingerprint sensor for unlocking the device and for authorizing mobile payments, including Android Pay. They both use a non-removable battery, and both have rapid charge capabilities. They come with the usual suspects – WiFi, Bluetooth v4.2, GPS, NFC, and the newer reversible Type-C port for charging and data transfer.

Please take a thoughtful look at the detailed Specifications Comparison chart below, and here you will see just how these two great devices stack up against one another. After that, we will look at each device in greater depth and point out some of its pros and cons. From all of this information, we will try to determine the winner based on specs and execution of design and functions. 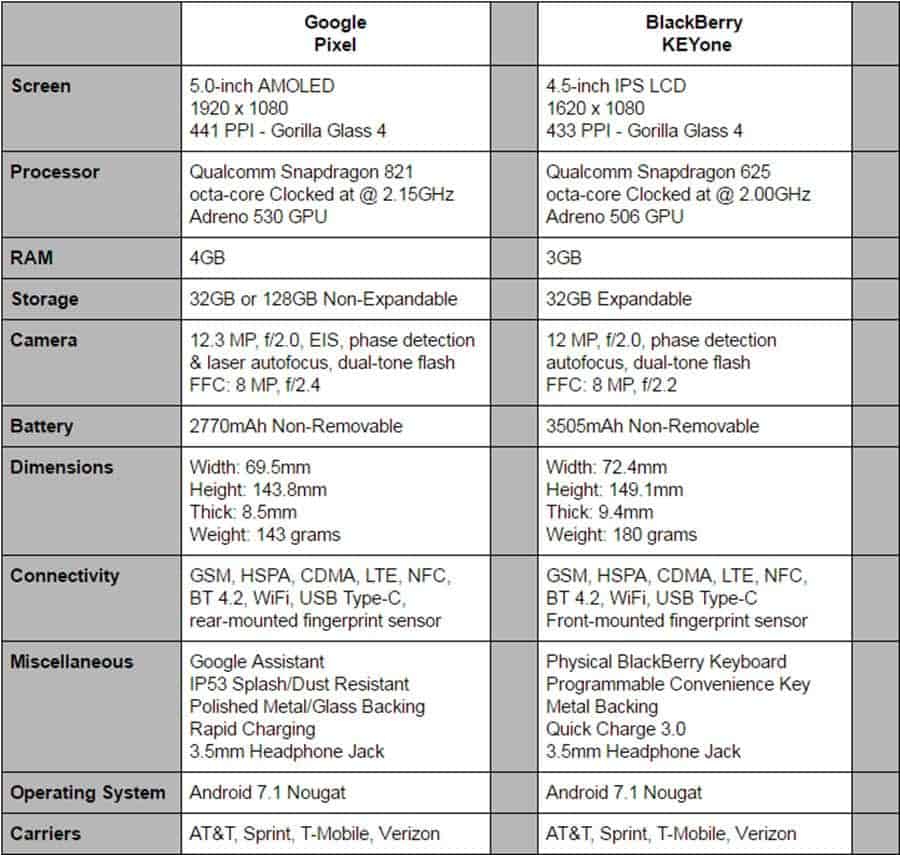 Google caused quite a stir with longtime Nexus lovers in 2016 by dropping their beloved Nexus moniker when they came out with their new line of smartphones – the Google Pixel and Pixel XL. Google is trying to tap into what Apple has done and create their own ecosystem that ‘nudges’ customers into buying more Google products. The differences are small between the two Pixel models – mostly just in the screen size, display resolution, and the battery. In this comparison, we will be looking at the Google Pixel because its 5.0-inch display with a Full HD resolution is better suited to go against the BlackBerry KEYone. Let’s see how this newly designed Pixel with its polished glass and metal construction holds up to the new KEYone’s all metal construction and the specifications that it brings to the table.

The Google Pixel sports a 5.0-inch AMOLED display with a Full HD resolution of 1920 x 1080 pixels and roughly 441 pixels-per-inch (PPI). The Pixel models came out late enough they were able to skip the 64-bit Qualcomm Snapdragon 820 quad-core processor and use the upgraded Snapdragon 821. According to Qualcomm, this gives the SD821 a 10-percent performance boost over the original SD820. It comes with a dual-core clocked at 1.6GHZ and a dual-core clocked at 2.15GHz and uses a powerful Adreno 530 to handle any of your graphic needs. It packs 4GB of DDR4 RAM with either 32GB or 128GB of the faster UFS 2.0 memory with no means to expand. The Pixel has a 2770mAh non-removable battery with rapid charge capabilities.

Google used the same excellent camera in both Pixel models, so you can be assured of great photos from the Pixel. The primary camera uses a 12.3MP sensor, an aperture of f/2.0, phase detection autofocus (PDAF), and laser autofocus, a dual-tone LED flash, and EIS rather than OIS. There is an excellent 8MP FFC that comes with a f/2.0 aperture and 1080p recording, offering great social selfies and video chatting. DxOMark’s website rated the main camera and gave it one of the highest scores.

The polished glass and metal back of the Pixel gives the device a unique look and this is where you will find the rear-mounted fingerprint sensor. It will allow you to unlock your device or to authorize mobile payments, including Android Pay because it has NFC capabilities. The Pixel only has an IP53 certification rating for splash and dust resistance and it is a shame Google did not go all the way with an IP68 rating. The Pixel is running Android 7.1 Nougat out of the box and will continue to receive the fastest updates from Google. The Google Pixel measures in at 143.8 x 69.5 x 8.5mm and weighs in at 143 grams. It comes in Quite Black, Very Silver, and Really Blue (limited edition color.) The pricing is not cheap and is even a little on the expensive side with a 32GB Google Pixel costing you about $650, and the 128GB will run you about $750.

BlackBerry, at one time, was THE smartphone to own. They had a reputation for building the most secure device around and having the best physical keyboard of any smartphone. However, as other devices grew with faster processors, more memory, and larger displays, BlackBerry’s leaders did not think all of that was necessary. The owners were let go, but it was too late for BlackBerry to make a recovery. Fast forward to today and we are happy to say that their new KEYone is the best smartphone that BlackBerry has ever made. It falls into that upper-midrange sort of device but it is BlackBerry’s flagship for now. It is a well-built and solid device manufactured specifically for BlackBerry by TCL. It has an all-metal construction with curved edges on all four sides for easy gripping and holding and a nice soft touch backing for a firm grip. On the back, the camera sits in the upper left corner and has a slight bulge to it. Let’s see if BlackBerry did enough to their new KEYone and just how it stacks up to the Google Pixel.

BlackBerry had to go with a smaller 4.5-inch display size to help accommodate room for the physical keyboard. The shape of the IPS LCD Full HD display gives it an odd resolution of 1620 x 1080 pixels and allows a respectable 424 PPI. BlackBerry chose the terrific 64-bit Snapdragon 625 octa-core processor clocked at 2.0GHz – a great midrange processor and then paired it up with an Adreno 506 GPU. The KEYone runs almost a pure vanilla Android so that processor has plenty of muscle for this new smartphone. The Adreno 506 is a very capable and it took on anything we threw at it during our review. The KEYone uses 3GB of DDR4 RAM and 32GB of internal memory that is expandable via a microSD card. However, remembering that it runs almost pure Android 7.1 Nougat out of the box, 3GB is more than enough RAM, and our review backs this up.

The BlackBerry KEYone uses the same 12MP primary camera found on the Google Pixel models. It has an f/2.0 aperture, Phase Detection Autofocus (PDAF), and a dual-tone LCD flash that will make most users very happy with their pictures. The FFC is a large 8MP sensor with a smaller f/2.2 aperture for selfies and video chatting. The KEYone uses a rather large 3505mAh battery will provide all day power and it comes with Quick Charge 3.0 for rapid charging that will give you a 50-percent charge in 30 minutes.

BlackBerry incorporated a ‘Convenience Key’ on the right that is programmable for a number of tasks, making it quite a ‘convenience’ to use. BlackBerry was able to keep the fingerprint sensor on the front without taking up any extra space by including in the ‘space bar’ of the physical keyboard. While the spacebar does not allow for any shortcut swiping, the keyboard itself has over 52 shortcuts making it easy to jump to different places. The KEYone comes with a 3.5mm headphone jack, includes a set of earbuds in the box, and packs an FM radio. The BlackBerry KEYone measures 149.1 x 72.4 x 9.4 mm and weighs in at 180 grams, and comes in our favorite color, Black. The 3GB/32GB device is available for about $549. 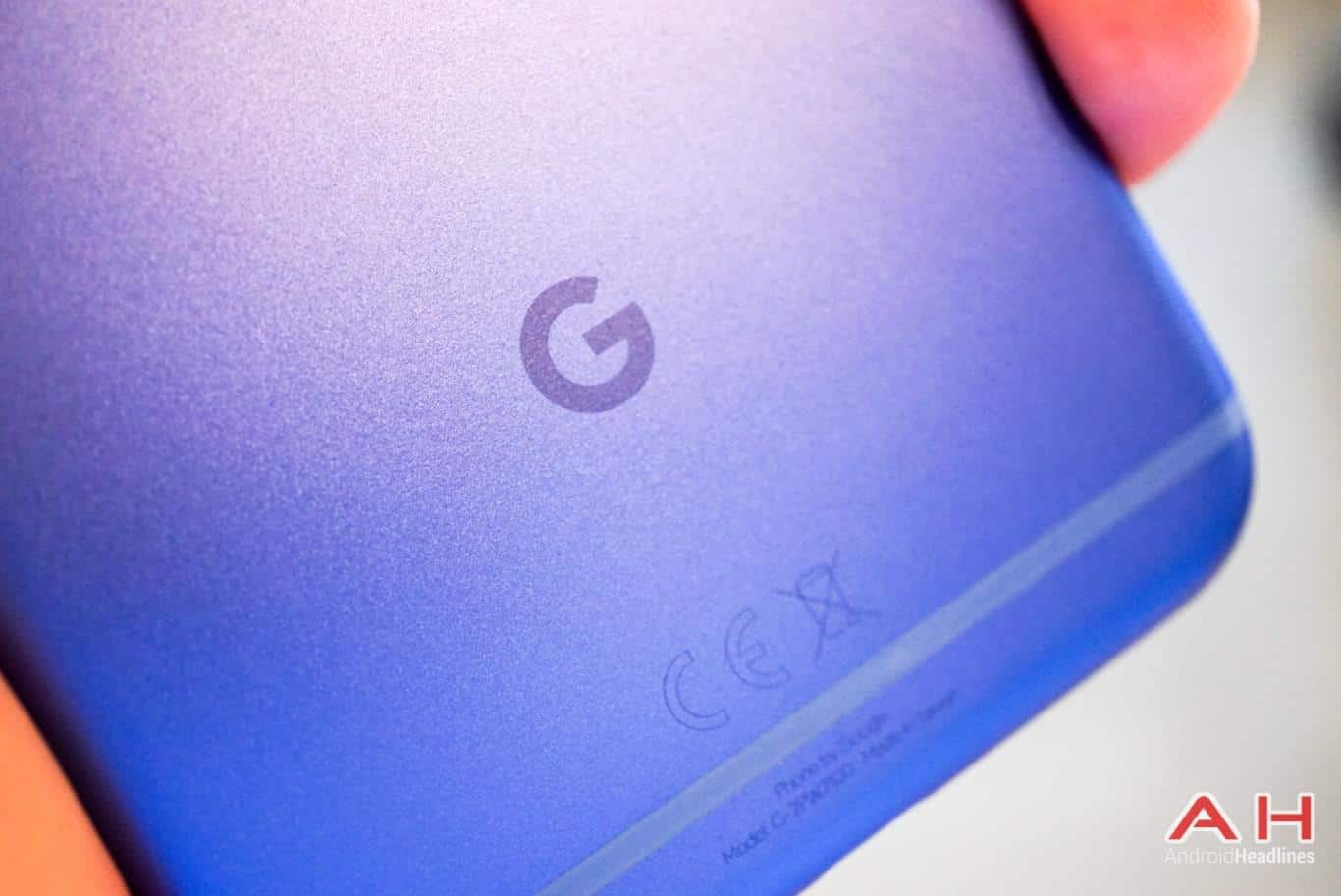 This really was a tough decision, but I went with the more expensive Google Pixel as the winner for a couple of reasons. It definitely has the more advanced processor, GPU, a larger AMOLED display and the fact that it will receive the fastest software updates. However, after saying that, we must go on record saying that the BlackBerry KEYone is $100 cheaper and should satisfy most users – especially if you want a physical keyboard.

Other factors to consider are that the KEYone is running almost pure Android, so it will be interesting to see how fast BlackBerry updates the software. The KEYone also has a much larger battery, expandable memory, and an excellent camera as well.

Both devices are well built and solid and depending on your needs, should satisfy their owners. If you must have a Google phone and the fastest updates, even if the price is inflated, then the Google Pixel is your only choice here. If you have an need for a BlackBerry device or demand a physical keyboard, the BlackBerry KEYone will not disappoint you.