Do we have a good one for you today – the Samsung Galaxy Note takes on the Samsung Galaxy S9 Plus – the top two Samsung smartphones are compared to see which one offers the best hardware and software experience. There is only one problem, these two devices are very similar in both of these areas. The Galaxy S9 Plus is Samsung’s main flagship with the ‘S’ Series being its ‘bread and butter’ when it comes to sales and monetary income. The Galaxy Note 9 is a flagship in every respect that happens to include an S Pen. Although there are plenty of buyers who must have the latest Galaxy Note device, but never, or very rarely, make use of the S Pen – which for those users results in a further reduction in the difference in experience between the two phones. Right now there is almost a hundred dollars difference between the two, although some carriers are offering buy one, get one free promotions – a great deal if you are interested in purchasing a Galaxy Note 9. If you already own a Galaxy S9 Plus, upgrading would not make any sense at this point.

These two top dogs from Samsung have many things in common. Let us start with the displays that are almost identical in size and specifications. Samsung is continually improving its displays, so the Galaxy Note 9 is, without a doubt, the best-looking display on the market. Both incorporate the Always-On Display (AoD) technology for notifications and Gorilla Glass 5 for protection. Both use the same Snapdragon 845 processor and Adreno 630 GPU in the US version, and for most other countries you will find a Samsung Exynos 9810 processor and a Mali-G72 MP18 GPU – both are equally powerful. The Note 9 and S9 Plus have 6GB of base RAM. The dual-cameras are about identical – each with 12-megapixel of Super Dual-Pixels and both have the dual-aperture lenses. Both use the same 8-megapixel camera for their front-facing camera (FFC). Both use a large non-removable battery with Adaptive Fast Charging and Quick Wireless charging. Even their physical size is very close, although the Note 9 weighs slightly more – most likely because of the larger battery. They have the usual suspects, such as Wi-Fi, Bluetooth v5.0, NFC, and a USB Type-C port for charging and transferring data. They both support Samsung Pay, are IP68 certified, feature Hi-Res audio with stereo speakers, a 3.5 mm headphone jack, a rear fingerprint sensor, Bixby 2.0, AR Emoji, Intelligent Scan, Heart Rate Monitor, and an SpO2 sensor.

Please take a careful look at the detailed specifications comparison chart below and you will see just how these two high-end smartphones from Samsung stack up against each other. After that, we will look at each mobile offering in more detail and point out some of its pros and cons. From all of this information, we will try to determine the winner based on overall specs, as well as the execution of design and functions. 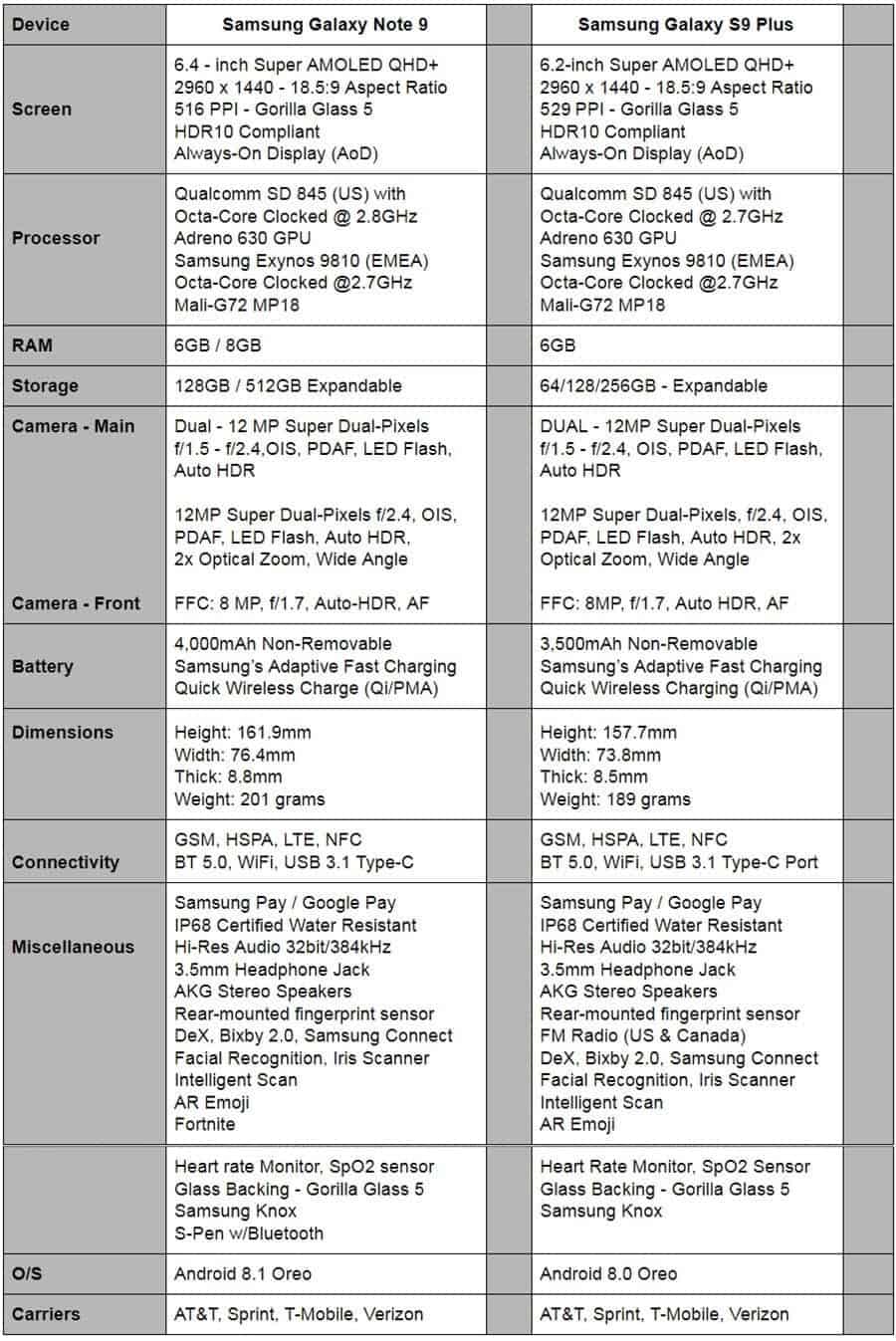 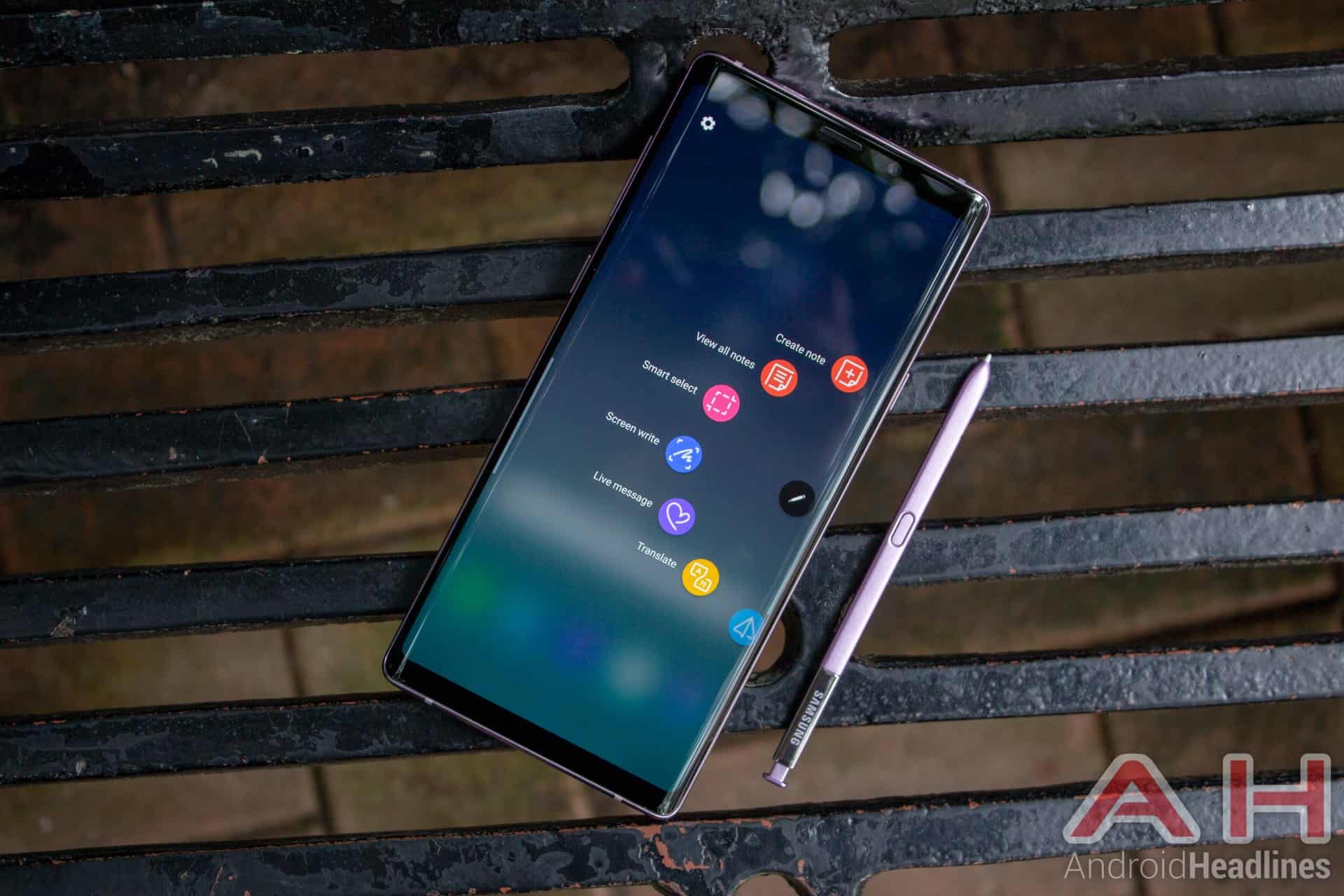 The Samsung Galaxy Note 8 is where Samsung debuted its dual cameras, which later showed up with improvements on the Galaxy S9 Plus, and now those improvements have been passed to the Galaxy Note 9. The Note 9 is really a Galaxy S9 Plus with a few added features of its own. Some of those aspects picked up from the Galaxy S9 Plus include the new dual aperture feature for better low or bright-light situations, AKG stereo speakers, and a better placement of the fingerprint sensor. Samsung also improved the Note’s exclusive feature, the S-Pen, as it now includes Bluetooth allowing owners to click the pen and use it like a remote control.

Samsung increased the display ever so slightly from the Galaxy Note 8’s 6.3-inches to the Galaxy Note 9’s 6.4-inches, which is larger than the 6.2-inches on the Galaxy S9 Plus. Samsung did not mess with a good thing so it retains the Infinity Display, the 18.5:9 aspect ratio, the QHD+ resolution with 2960 x 1440 pixels, and 516 pixels-per inch (PPI). Samsung kept one of the best Always-On display features, used on both the Note 9 and Galaxy S9 series, allowing the user to quickly check the time and date, as well as pending notifications – this also helps with battery life since there is no need to turn on the phone unless you want to open up the notifications. Gorilla Glass 5 protects the front and back of the Note 9 with a thin metal frame holding it all together.

Samsung put in the Snapdragon 845 processor clocked at 2.8 GHz along with an Adreno 630, like the one used in the Galaxy S9 series, as well as the same 6GB of RAM. The Note 9 packs 128GB of expandable storage, although there is a model which will land you 8GB of RAM and 512GB of expandable storage. Samsung finally jumped out of the 3,000 mAh battery range and provided an upgrade to a non-removable 4,000 mAh capacity battery. This should help the normal user to make it through an entire day more easily. If you find that you need to charge it, you can pick from Samsung’s Adaptive Fast Charger or its quick wireless charger designed for both Qi and PMA formats.

Samsung upgraded the camera on the Galaxy S9 Plus and passed that on to the new Galaxy Note 9. It is a dual 12-megapixel affair that uses a Super Dual Pixel and a Dual Aperture. The main camera uses a large f/1.5 aperture for low-light shots and adjusts itself automatically to a smaller f/2.4 for bright shots. It uses OIS, PDAF, an LED flash, and Auto HDR. The secondary camera uses a wider angle lens with a fixed f/2.4 aperture and helps with bokeh, or what Samsung calls, ‘Live Focus’ effects, as well as incorporating a 2x Optical Zoom. Samsung includes an excellent FFC with 8-megapixels, along with a large f/1.7 aperture, auto-HDR, and even includes its own autofocus. It should produce some excellent selfies and video chats.

Samsung devices always have many pre-installed apps and some are more useful than others. Samsung Pay is useful for those that make mobile purchases. Exercise folk might appreciate the heart monitor, the SpO2 sensor, and new blood pressure monitor. A convenient side panel (left or right) can be slid out to make available the most used contacts and apps. Samsung’s Bixby personal assistant is available, as is an improved Samsung DeX design that allows you to transform your Galaxy Note 9 into a desktop computer with a simple cable.

The Note 9 is initially available in Lavender Purple and Ocean Blue in the US, but may eventually become available in other colors. For instance, Midnight Black and Metallic Copper are available in other markets and Samsung is known to add colors at later dates. It comes with Android 8.1 (Oreo) out-of-the-box and the newest Samsung Experience 9.5 (UI), which is lighter and less obtrusive than earlier versions. The device measures 161.9 x 76.4 x 8.8 mm, weighs in at 201 grams, and costs $1,000 for the 6GB/128GB model. 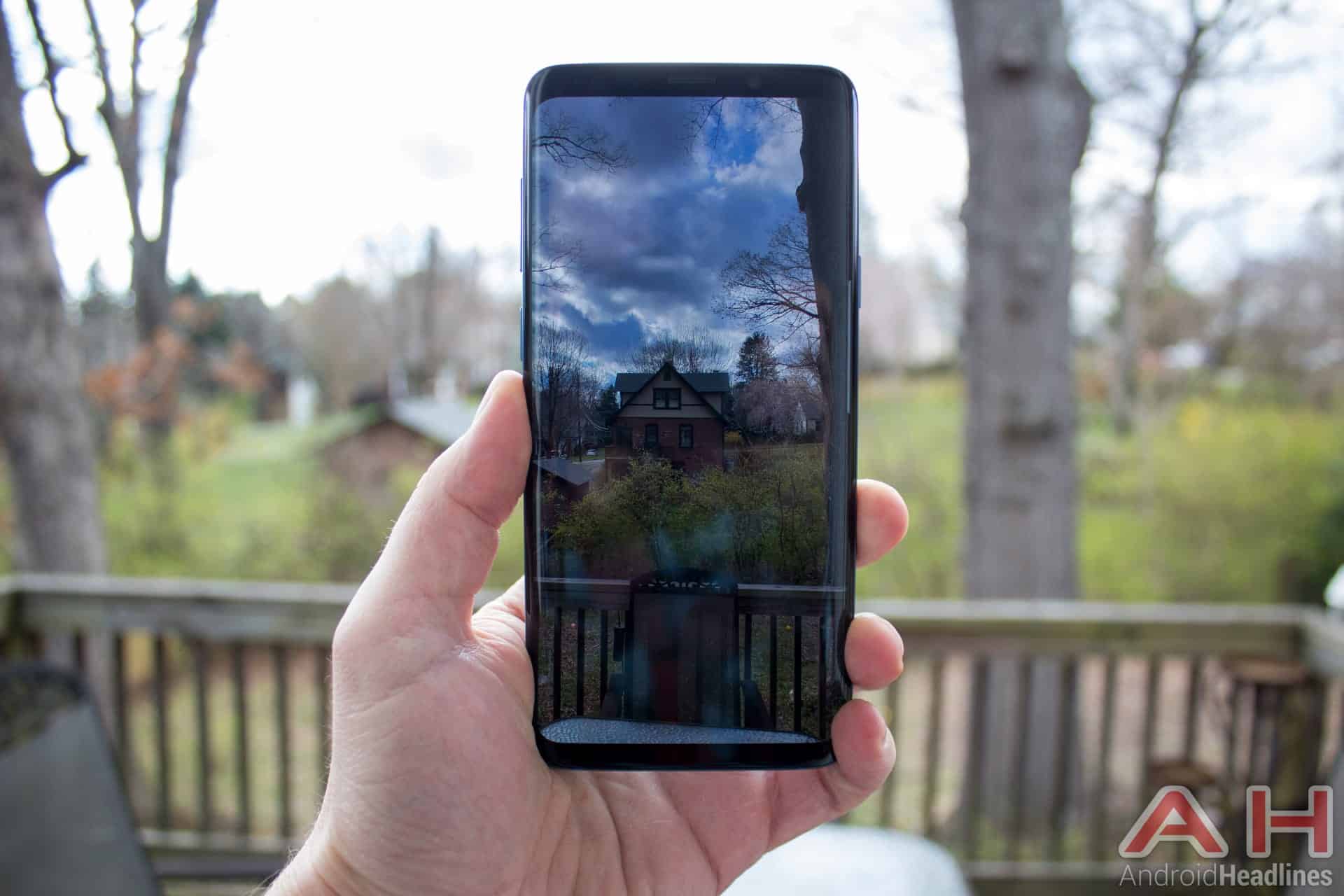 Samsung only made minor changes to the Galaxy S9 Plus after its major Galaxy S8 Plus upgrade. There were subtle design changes to the sides of the device to make it easier to pick up without accidentally opening an app near the edge of the dual curved display. Samsung has long been criticized for only carrying a single speaker so Samsung added a pair of AKG stereo speakers that sound great. With most manufacturers including dual cameras, Samsung added that feature to the Galaxy Note 8, and included an improved version of its dual camera setup on the S9 Plus. A new feature, called Intelligent Scan, combines the facial recognition and the iris scanner to validate the user to unlock the device. This adds a more secure way to unlock your device. The fingerprint sensor is smartly relocated below the camera to help avoid smudges. AR Emoji is a new feature that needs more work, but should prove fun in the future.

Samsung carried over the same sized 6.2-inch Super AMOLED Infinity Display from the Galaxy S8 Plus. It is sports a QHD+ with a pixel resolution of 2960 x 1440 and a 529 PPI. The S9 Plus uses an Always-On display that helps extend battery life, while allowing the user to quickly glance to determine if they want to read the entire notification then or wait until later. Gorilla Glass 5 protects both the front and back of the device, held together by a thin frame of metal.

Like the Galaxy Note 9, Samsung offers two models – the Galaxy S9 Plus version sold in select countries including the US uses the Snapdragon 845 octa-core processor clocked at 2.7 GHz with an Adreno 630 GPU for graphics. Galaxy S9 Plus units going to other countries use a Samsung Exynos 9810 octa-core processor clocked at 2.7 GHz and a Mali-G72-MP18 GPU – either processor/GPU will get the job done. The RAM increased from the Galaxy S8 Plus’s 4GB to 6GB and the storage to an expandable 64GB. Samsung also sells models with 128GB or 256GB of storage, but availability will depend on location and carrier.

Critics kept guessing when Samsung flagship would arrive with a dual camera. The Note 8 was the first, but the Galaxy S9 Plus (and Note 9) takes it to a new level. The dual cameras use improved Super Dual Pixels on its 12-megapixel sensors. It packs PDAF, OIS, 2x Optical Zoom, 10x Digital Zoom, and an LED flash. The most exciting feature is the new adaptive aperture that changes from a large f/1.5  for low-light pictures to a smaller f/2.4 for bright situations. The second camera has a fixed f/2.4 aperture and wider angle for special effects. The FCC uses an 8-megapixel lens with an aperture of f/1.7 that includes auto-HDR and comes with its own autofocus.

To power the Galaxy S9 Plus, Samsung kept the same 3,500 mAh non-removable battery used in the Galaxy S8 Plus. Critics were hoping for a larger battery, but the SD845 is even more efficient, so hopefully, for most users it will last the day. If you need to charge your battery during the day, you have a choice of using Samsung’s Adaptive Charge or quick wireless charging.

Samsung adds a lot of bloatware to its phones, some you may never use while others are more useful. Samsung Pay is something that will help those that make mobile purchases. For those that exercise, the heart monitor, the SpO2 sensor, and new blood pressure monitor will come in handy. A convenient side panel (left or right) can be slid out to make available your most used contacts or apps. Samsung’s Bixby personal assistant is available, as is an improved Samsung DeX design that allows you to transform your S9 Plus into a desktop computer with a simple cable.

It comes with the new and less invasive Samsung Experience 9.0 (UI) on top of Oreo 8.0. The device measures 158.1 x 73.8 x 8.5 mm and weighs in at 189 grams. It comes in Midnight Black, Coral Blue, Titanium Gray, Lilac Purple, Burgundy Red, and Sunrise Gold – depending on region. Retail pricing ranges from $915 to $930, but there are quite a few promotions available. 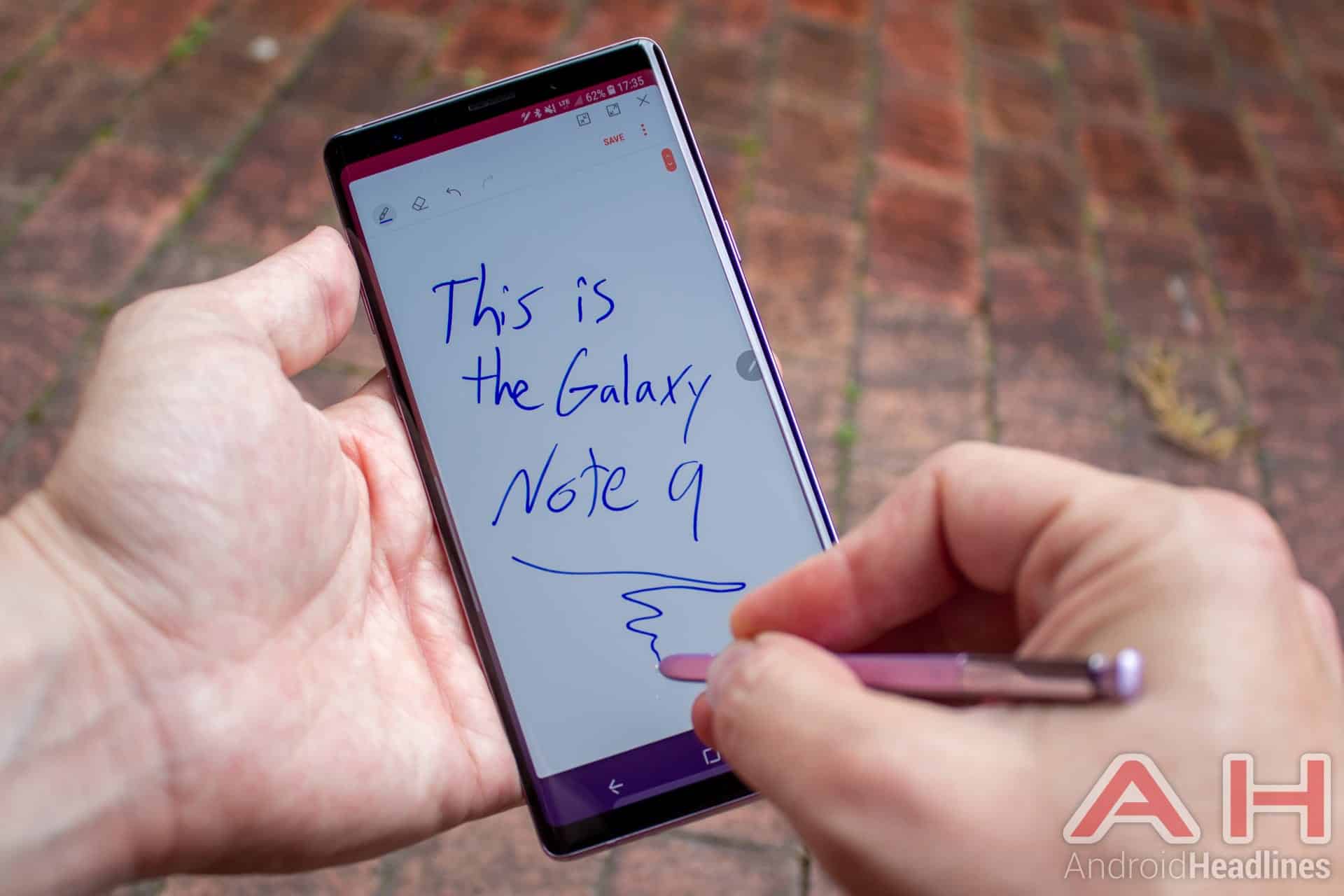 This was a very tough decision, but I had to pick Samsung’s latest and greatest Galaxy Note 9 as the winner of this comparison. True, it does cost almost $100 more than the Galaxy S9 Plus, but it offers more than that in return – the 128GB of base storage and the S-Pen alone are worth that much. You do get a slightly larger display, larger battery, and it has Fortnite pre-loaded on the device.

As you can see, these two devices are separated by very few specifications and less than $100 in price. Having the same processor, GPU, RAM, and cameras made the decision to pick the Galaxy Note 9 as the winner a difficult one. There are many promotions going, so you may pick up the Note 9 for less than the Galaxy S9 Plus right now.