Today, the all-conquering Samsung Galaxy S8 goes up against the HTC U11 – the latest flagship smartphone from the embattled Taiwanese tech firm. We’ll do a detailed head-to-head comparison of the hardware components and software features of the two devices to see if the Samsung flagship has enough firepower to stave off competition from its fellow Asian rival, or if the new offering from HTC is good enough to potentially unseat the Galaxy S8 as the best-selling premium Android smartphone worldwide. Of course, the Galaxy S8 won’t be the only competition for the HTC U11 in a highly-competitive premium smartphone market. The device will also have to compete against other serious contenders, like the LG G6, the Xperia XZ Premium, the iPhone 7 Plus and a whole lot of other devices that are also vying for a slice of the lucrative premium smartphone pie. But with Samsung’s latest flagship gaining more admirers by the day, can HTC’s latest give the it some much-needed competition? Over the course of this article, we’ll try to find out just that. 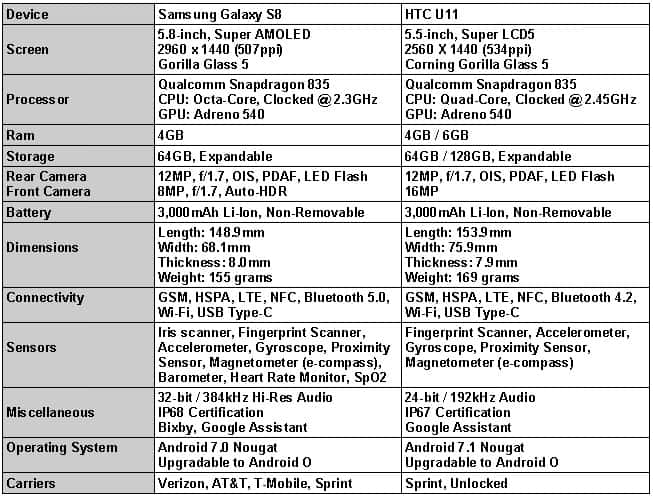 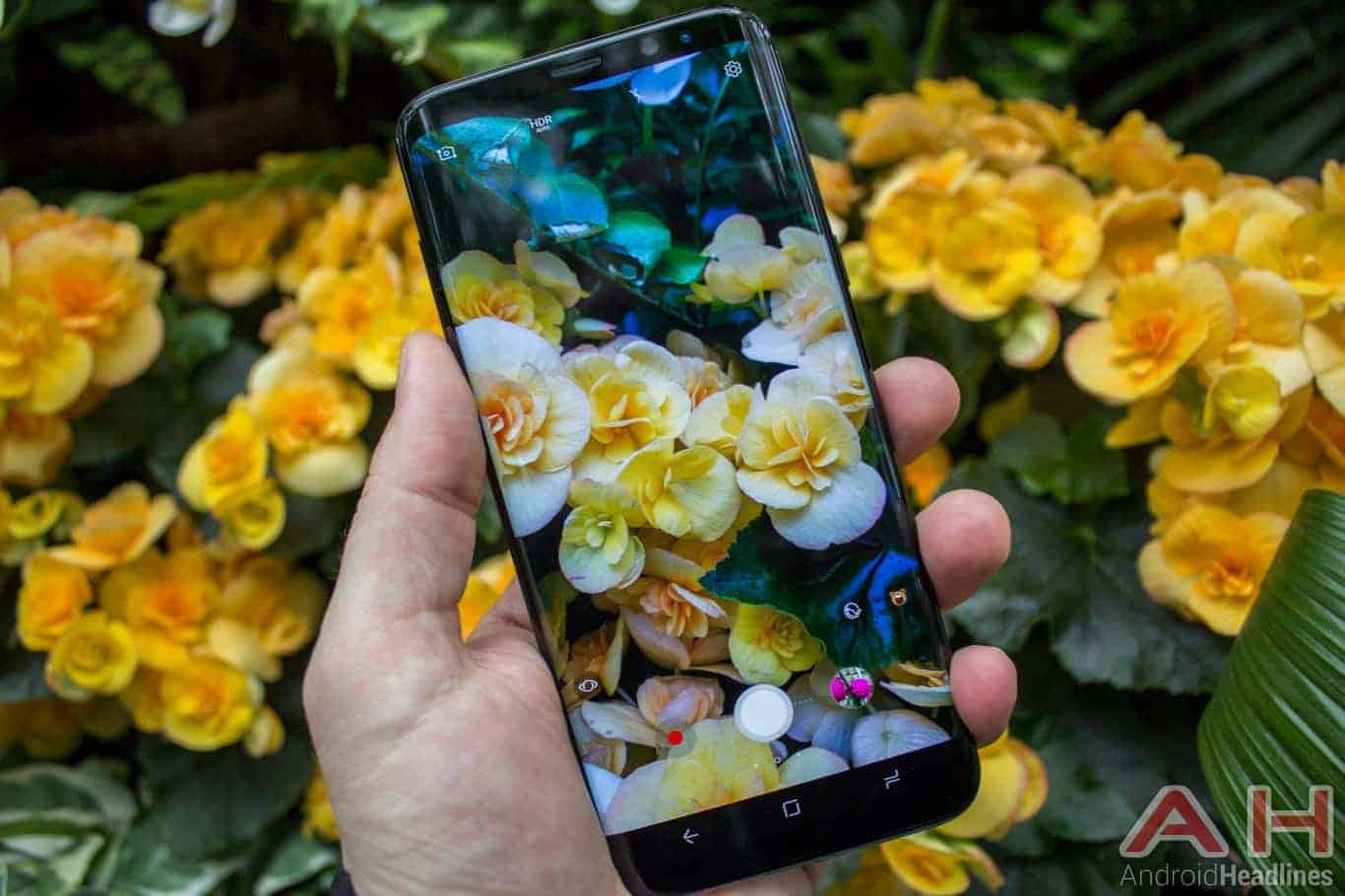 This is the device Samsung couldn’t afford to get wrong after all the negative press it received during 2016. From exploding smartphones to defective washing machines, and from corruption allegations against some of its top officials to getting sued by Brazilian soccer legend Pele, the past year was something the South Korean giant is undoubtedly happy to have seen the end of. With a lot riding on the Galaxy S8, it would have been easy for Samsung to have played it safe and released a smartphone with a conventional design, hoping not to offend anyone’s aesthetic sensibilities, but to give the company its due, it went all-in, giving its latest flagship a stunning, futuristic design makeover with an ‘Infinity Display’, an all-new AI personal assistant called ‘Bixby’ and a ‘DeX’ dock that can be used to connect the device to an external monitor, mouse and keyboard for desktop-like functionality.

The display, as you’d expect, is the first thing that hits you when you see the Galaxy S8 (and the Galaxy S8 Plus) for the first time. The 5.8-inch Super AMOLED WQHD+ (2960 x 1440) panel is protected by Corning’s Gorilla Glass 5 and comes with an aspect ratio of 18.5:9. While the complete lack of bezels on either side gives the Galaxy S8 its ‘Infinity Display’ moniker, what’s also equally impressive is how the designers have been able to shrink the bezels down to a minimum even on the top and the bottom. You get the earpiece, the front-facing camera and the proximity sensor on the top bezel, but the trademark physical Home button and the two capacitive keys flanking it on the bottom bezel have been replaced by on-screen navigation keys. The fingerprint scanner is placed on the back, right next to the camera housing.

The great thing about the Galaxy S8 is that it is not only a stunningly good looking device on the outside, but also comes with some serious hardware under the hood. It comes in two different variants. While the U.S. model is powered by the Qualcomm Snapdragon 835, and the international version has an Exynos 8895 under the hood. While the Qualcomm chip has an integrated 10nm CPU with 8 Kryo 280 cores clocked at a maximum of 2.45GHz, the Exynos chip, designed in-house by Samsung, comes with an integrated octa-core CPU with four cores clocked at 1.7GHz and four cores at 2.3GHz. As for the GPUs, the Snapdragon 835 comes with the Adreno 540, while the Exynos 8895 has a Mali-G71 MP20. The Galaxy S8 packs 4GB of LPDDR4 RAM and has 64GB of built-in UFS 2.1 storage that can be expanded by a microSD card.

Imaging options include a rear-facing Dual Pixel 12-megapixel sensor and a front-facing 8-megapixel shooter, both of which have an f/1.7 aperture. The primary camera offers phase detection auto focus (PDAF), LED flash, auto HDR and optical image stabilization (OIS), while the secondary camera comes with auto-focus and auto HDR. The battery on the Galaxy S8 is a 3,000mAh unit with support for Quick Charge 3.0. The device also comes with IP68 certification, denoting its resistance to water and dust. The Galaxy S8 measures 148.9mm in length, 68.1mm in width and 8mm in thickness, while weighing in at 155 grams.

While the hardware on the Galaxy S8 is fairly impressive, the software isn’t too shabby either. The device ships with Android 7.0 Nougat out-of-the-box, but is expected to receive Android O at some stage next year. The phone also comes with the ‘Samsung Connect’ software that allows users to hook it up to other, connected Samsung devices, which is certainly something to look forward to. However, the single-most important software feature of the Galaxy S8 and Galaxy S8 Plus is the introduction of Samsung’s very own AI personal assistant called ‘Bixby’. It can not only answer simple search queries, but users can also use the feature to get more information about various architectural landmarks in many regions around the world just by pointing the phone’s camera at those buildings or monuments.

Just like Samsung couldn’t afford to misfire with the Galaxy S8 after enduring various controversies during 2016, HTC also desperately needs a big hit to recover from all the well-documented financial troubles it has been going through over the past couple of years. From the looks of it, the company has done a pretty decent job with the HTC U11, although, it is too early to say whether that will be enough for smartphone buyers from around the world to flock to the company’s showrooms. The device boasts of high-end hardware and, has a glossy, ‘Liquid Surface’ design. The phone is also one of the first mainstream third-party devices to ship with Google Assistant on board, but the showstopper is definitely the much talked-about ‘Edge Sense’ feature that allows users to squeeze the sides of the device to interact with the phone in a number of different ways.

HTC has actually programmed its Edge Sense software to support both long and short squeezes, and by default, it will launch Google Assistant with a long squeeze and fire-up the camera with a short one. However, since Edge Sense is customizable, users can change what the squeezing does depending on what app they’re in. For example, you may use either a long or short squeeze to turn on the flashlight, start an audio recording, or just fire up Google Maps for navigation. The company is also expected to push through an update that will expand the Edge Sense functionality massively by enabling users to assign different functions to each squeeze, depending on the app they’re in. While all that sounds good enough, users will also be happy to know that Edge Sense won’t really need any developer support from 3rd-party apps, so almost all current apps will be supported by HTC right from the get-go.

While its software capabilities are impressive, the HTC U11 also ships with some pretty decent hardware. It features a 5.5-inch WQHD (2560 x 1440) Super LCD5 capacitive touchscreen display that’s protected by Corning’s Gorilla Glass 5. The device is powered by the Qualcomm Snapdragon 835 SoC – the same chip that can be found under the hood of the U.S.-spec Galaxy S8 and Galaxy S8 Plus. The HTC U11 also comes with 4GB of RAM and 64GB of built-in storage in the U.S., although, the company will also offer a 6GB RAM + 128GB storage option globally. Both versions will support microSD cards of up to 256GB in capacity. The device comes with an USB Type-C port for charging and data syncing, but misses out on the 3.5mm audio port just like many of its competitors. The handset ships with a 3,000mAh Li-Ion battery with support for Quick Charge 3.0, while sensors include a front-mounted fingerprint scanner, accelerometer, gyroscope, proximity sensor and magnetometer (e-compass).

Imaging options on the HTC U11 include a 12-megapixel primary camera with the company’s proprietary UltraPixel 3 and UltraSpeed Autofocus technologies. It comes with an f/1.7 aperture, a 1/2.55-inch sensor, phase detection autofocus (PDAF), optical image stabilization (OIS) and a dual tone LED flash with software features such as, geo-tagging, touch focus, face detection, HDR and panorama. The camera can record 4K videos at 30fps and 1080p videos at up to 120fps. As for the front-facing selfie-cam, it is a 16-megapixel sensor that can record 1080p videos at 30fps. The HTC U11 measures 153.9mm in length, 75.9mm in width and 7.9mm in thickness, while weighing in at 169 grams. The device also comes with IP67 certification, denoting its resistance to water and dust. 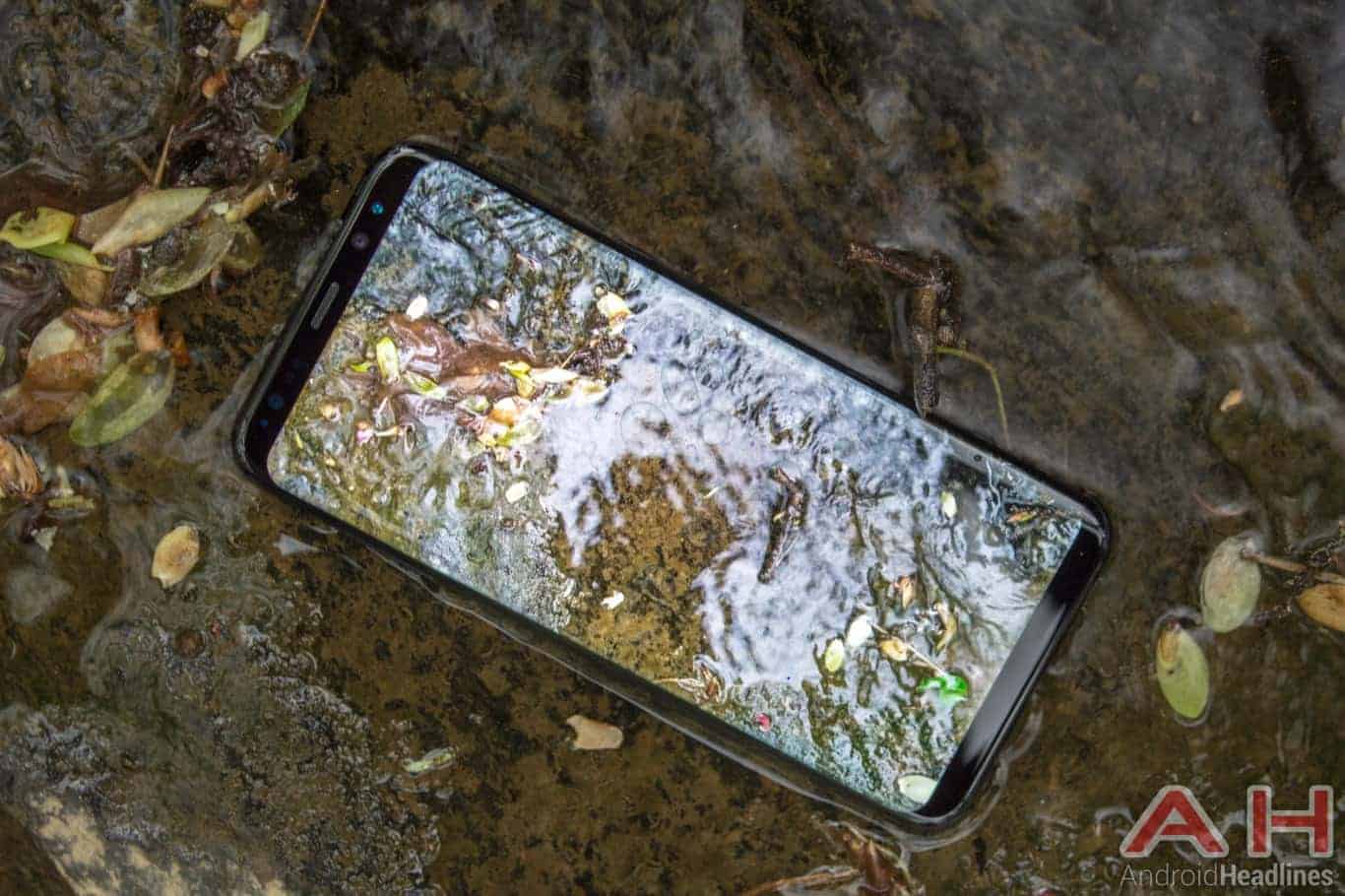 While the Galaxy S8 comes with a futuristic design with a curved Infinity Display, the HTC U11 is fairly traditional in its looks, although, the Liquid Surface design does make it stand out from the crowd of me-too smartphones. HTC is also hoping to change the way people interact with apps through its revolutionary Edge Sense feature in its latest flagship. The Taiwanese firm could have stolen a march over the Galaxy S8 by pricing its phone at a substantial discount to Samsung’s latest offering, but it chose not to do so, although, it does cost a little lower than the Samsung device. The way things stand, both smartphones have their own pros and cons and, are extremely decent buys in their own rights, but unless Edge Sense is a must-have feature in your opinion, the Galaxy S8 wins this one; if only for its unique design language and stunning display.

Buy The Samsung GalaxyS8 Buy The HTC U11