'Pixel Push' Review - The Pixels Will Be Pushed, But Your Brain May Not Be 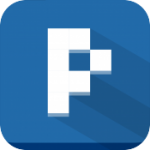 In a way, the App Store presents some of the most fertile soil possible for the puzzle genre of games. The touch interface lends itself well to moving pieces or objects around, they're one of the easier genres to put together a game for if you're a small developer, and the audience is very responsive to them. It's no wonder that there are so many different puzzle games available for iOS gamers. Pixel Push [$1.99] tries to push its way into this crowded arena, and like many other puzzle games on the platform, it's got a good idea, but slips on the execution.

At its core, Pixel Push isn't very far off of a sokoban/block pushing puzzle game. You're given a target image and the exact number of colored blocks needed to create it, along with some grey blocks to get in your way. You need to push the blocks into position in as few moves as possible. The catch in this game is that the blocks don't move individually. You can push them up, down, left, right, but when you do, the whole row or column goes with them. The grey blocks will often become an obstacle, since you can't push a row or column any farther if a block in it is touching the edge of the play area. 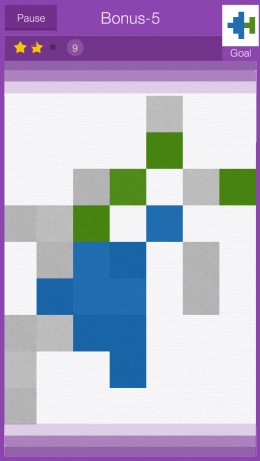 Depending on the number of moves you take to complete the target image, you'll be rewarded with up to three stars. The game is very clear about how many turns you have before you lose each star, which is quite welcome when you're trying to puzzle out the solution. The stars serve a purpose beyond decoration, as well. The puzzles are broken up into categories of one, two, or three colors, along with an extra category which is a mixed bag. To unlock the next group of puzzles, you have to earn at least 20 stars among the 24 stages of the current group. It's a fairly low bar, which I think is for the best, because it ensures that most people will be able to get access to all of the stages in the game. At the same time, it's a tangible reward for performing well, something too many games with star ranks fail to offer up.

One thing that I found kind of interesting was that although the order of the categories seems to push the idea that adding more colors makes it more difficult, I actually found the puzzles easier to solve when there were more colors in play. The colors need to match up with the target image, so you would think that would be harder than just being able to put whatever block anywhere you like, but in practice, the presence of extra colors actually offered up some clear hints towards the best solution. As a result, the game sort of loses its teeth the longer you play. Sure, getting three stars on some of the harder puzzles is quite a challenge, especially in the extra category, but it was generally the case for me that the later puzzles in the first group were more challenging than the second, which were harder than the third. 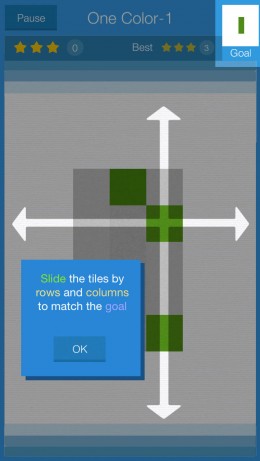 The game at times toys with making interesting shapes for its target images. You'll get some very basic types, like certain letters of the alphabet, but for the most part, the target image is an abstract shape. I feel like there was a missed opportunity here, both in terms of appeal and challenge, that there weren't more puzzles based around familiar objects. This would have necessitated a larger grid for the pixels, and perhaps controls would have been a concern in that scenario, but it certainly would have ended up in more difficult puzzles that were more fun to clear. As is, the whole thing feels very anti-climactic. In the last puzzle of the game, you're working on a grid the same size as the first puzzle, with only a couple of colors, making a letter 'P'. There's no feeling of progression at all.

Unfortunately, Pixel Push also fails to push things in its presentation. The menus are clean and the colors pop well enough, but the UI is a bit awkward, requiring you to open a menu if you want to restart a level. There's no music at all, and very little in the way of sound effects. I know, it's easy to play one's own music in the background, and a lot of people prefer that. However, as games like Crush [$0.99] and Subaku [$1.99] demonstrate, puzzle games can benefit greatly from having even just a couple of awesome tracks to play along to. It helps add character to a game, which is something Pixel Push is really lacking.

I like the idea of this game well enough. I'm a confessed Picross/Illustlogic maniac, so the idea of creating pictures by solving logic puzzles is something I am completely on board with. Pixel Push just doesn't go far enough. It gives you 96 stages, which is a nice number, but only a handful of which provide much challenge. It has little in the way of a difficulty curve, and doesn't capitalize well on the idea that you are putting together images with the blocks. It'll occupy your time, to be sure, but it's not going to occupy your mind for very long. I'd love to see the developer take this idea farther sometime, but for now, it's a hard game to recommend with so many better choices available.