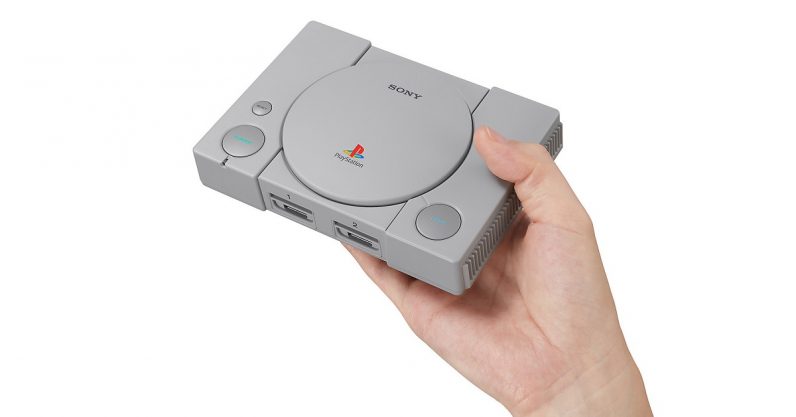 Sony today announced it was releasing the PlayStation One Classic later this year — the sixty millionth retro console so far (I’m guesstimating). You’d think, now that we’re so deep into this trend, we’d see a little innovation, or at least something other than a tiny hunk of plastic with a couple of emulated games on it. But no, we’re not going to get much beside yet another NES Classic.

The PS One Classic was first hinted at earlier this year when Sony Interactive President Takeshi Kodera let slip the company was having “discussions” about it. I didn’t expect to see it this soon, but it makes sense Sony wants a little something extra to garnish the 2018 holiday season. But I was hoping the PS One Classic would be a little bit…more.

Instead it’s just opting to mimic the example set by Nintendo with its NES Classic. It bears repeating that the NES Classic was a stopgap console which tided Nintendo over the holidays until the Switch could be released. It’s a novelty — a toy.

But now the retro console is a thing. It’s a demonstrable success that competing companies are hoping to replicate to their own benefit. And the problem is that none of them is bothering to change anything about the formula.

I think Devolver Digital’s Nina Struthers character said it best at this year’s E3 show when she said:

The past few years, we’ve seen a new trend in gaming hardware:Companies reaching deep into their back catalogs to construct cute-as-fuck, little miniature fun-sized versions of their legacy hardware, overflowing with classic games of yesteryear — asking you to pay a ridiculous premium for games that you owned 20 years ago and will be utterly disappointed by playing again today… You love these little nostalgic cash grabs, and we have no fucking idea why.

Yeah, it’s satire, but all satire has a grain of truth in the center of it.

These consoles are stagnant. The joy of game consoles is their large libraries of games, constantly shifting and renewing like glorious digital ecosystems during the console’s lifetime. So to see a console like this be released with just a small modicum of games defeats the purpose of having a game console.

If asking for even mild innovation is too darling, how about this: Can we at least put a few more games on the damned thing? Seriously, 20 games, Sony? Even the NES Classic did better than that. There were hundreds, if not thousands, on the original console. And not to mention one of those games is Final Fantasy VII, a game that was, just a few days ago, named as one of the FF games coming to the Nintendo Switch. Sony, you’ll chap your hide if you ride that game any harder.

The hardest part is that I know Sony can do better, and is merely choosing not to. For example, Sony‘s got more classic games that available on the PS Vita’s Classics store, which I know because I’m one of the seven people who owns a PS Vita.

So, here’s an idea: Instead of just releasing a hunk of plastic pre-loaded with a handful of games, why not allow users the chance to refresh their libraries over time by offering digital packs full of “new” retro games? The packs could offer certain genres: “Get the Classic RPG Pack with Chrono Cross, Suikoden, and Final Fantasy VIII today!” Or it could offer games from a particular publisher, or even just a variety grab bag. Just…something other than, “Here’s 20 games you played in the 90s and nothing else for $100.”

There’s a chance for some real fun to be had with a retro console in the PS One Classic, and Sony‘s choosing to flat out ignore it. How much longer can this trend continue before the returns diminish? I know this console is going to sell, and that’s what makes me so sad: It means neither Sony nor anyone else will be motivated to try anything better.