Nearly half a year after its action-oriented take on Snake, the folks at NimbleBit are back again with a free-to-play title much closer to its time management roots. Indeed, from as superficial standpoint, Pocket Trains [Free] shares some of the aesthetic and gameplay formula of Pocket Planes [Free]. However, behind the similarities is an excellent transportation management title that offers deeper strategic gameplay than its spiritual predecessor. Combine this with NimbleBit's penchant for fair IAP balancing, and Pocket Trains is yet another fun title that needs to be checked out.

Gamers familiar with NimbleBit titles will find that Pocket Trains shares a lot of gameplay and visual cues with the 2012 released Pocket Planes. Bitizen-style pixel art makes a return along with the world map. The coin/bux dual-currency system also makes a return. The general "goal" of Pocket Trains is also similar, with cargo transporting across cities being the main objective. 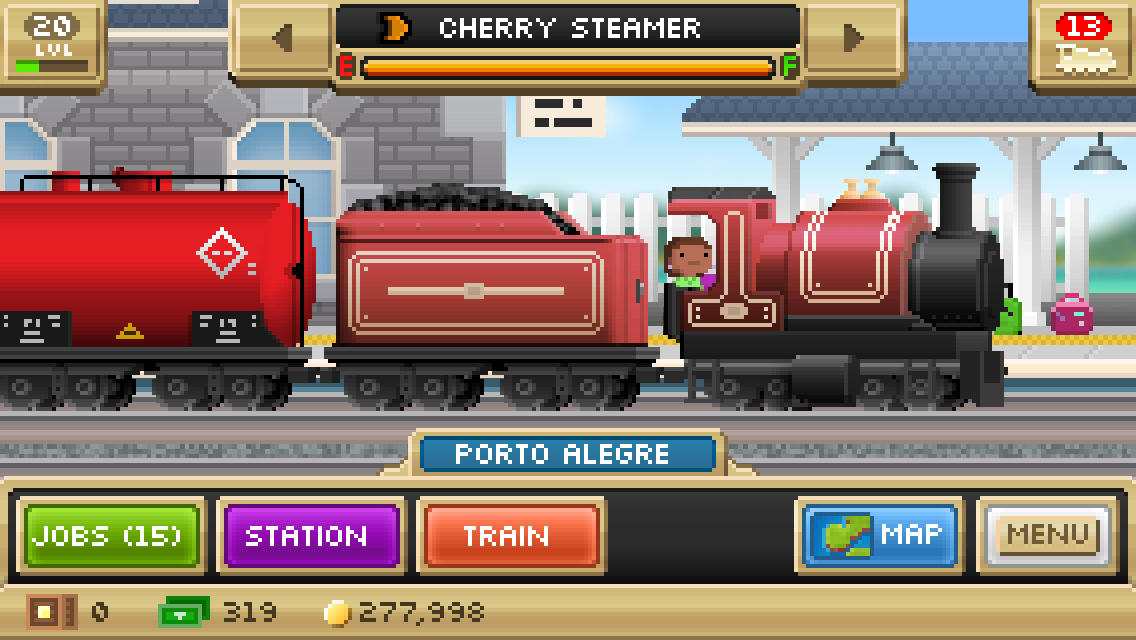 While veterans of Pocket Planes may balk at the resemblance to Trains, there are a lot of differences (both subtle and otherwise) that both change and improve upon the familiar gameplay. For starters, the visuals have been nicely improved upon, both in terms of sprite variety and detail. Watching your planes fly in Pocket Planes was a bit boring, but I actually enjoyed taking in the scenery with Pocket Trains. Being a game about trains, Pocket Trains also puts a greater focus on building and assigning track routes rather than the attributes of the actual train. Sure, there's a large variety of different trains to craft (each with their own attributes and upgrades), but if you don't plan your routes accordingly, the best train won't matter too much.

This is the case for two reasons: first, there are only a finite amount of track routes that can be bought for each city (some cities may even only have one track connected to it). Second, specific routes can only be attached to one train at a time meaning you can't simply have one train connected to every track as it'll be incredibly inefficient to transport cargo. This is quite a bit different than Pocket Planes, which put a greater emphasis on the flight capabilities of your planes along with the airports owned. 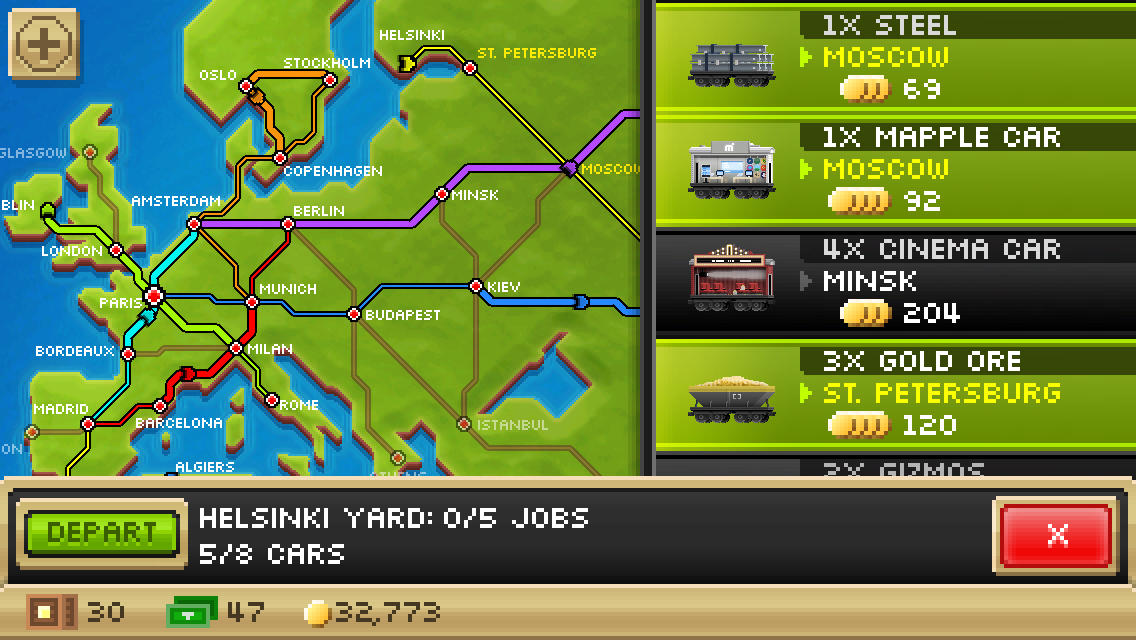 I'm a fan of the gameplay changes made in Pocket Trains. The restrictions on train routes give the game greater strategic depth than Pocket Planes and makes the purchasing and assigning of routes to trains meaningful. Tactics such as hub-and-spoke for planning the logistical transport of cargo become almost necessary to succeed. There's also enough options in terms of cities and routes that players can employ a lot of different approaches depending on playstyle and train inventory. Unfortunately, I found that Pocket Trains' gameplay changes lead to a slower start than other titles. However, one you unlock a few major cities and start additional lines, Pocket Trains really begins to hit its stride.

Being free-to-play, I'd be remiss if I didn't at least mention the Pocket Trains freemium elements. This time around, the game's premium 'bux' currency is used not only to speed up trains to their destination, but you can also cash them in for coins, and they are also used to open crates that contain train parts. While the crates themselves are earned by transporting them to cities, bux are required to actually open them, making this premium currency more necessary than previous titles. Still, being a NimbleBit title, bux flow freely during the normal course of gameplay and the IAPs are also very fair, making the necessity of the premium currency mostly an afterthought.

Sure, there are a few nagging areas that that I wished Pocket Trains would improve. The social events of Planes have been replaced with single player ones that don't offer nearly as enticing awards. In addition, the randomness of train breakdowns which slow down train speeds (unless you repair which requires coins or a train part) can be annoying. Overall however, I think Pocket Trains makes a lot of strides with its core gameplay, making it the sort of logistical title that I think Pocket Planes aspired to be. Suffice to say, there's really no reason not to check out Pocket Trains, and I highly recommend everyone giving it a try.