The power of two: Use your iPad or iPhone as a mobile file server 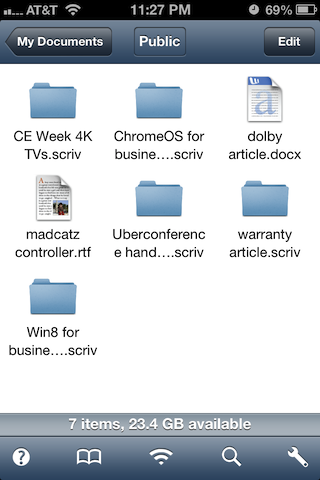 Avatron's Air Sharing turns your iPhone or iPad into a mobile file server, overcoming one of the limitations inherent to the locked-down iOS filesystem.

For all the talk about a “post-PC” world, most people use smartphones or tablets as an addition to their existing technological arsenal, rather than a replacement for a standard laptop or desktop. In fact, there are a number of ways to combine the capabilities of your PC and mobile device that can make your tablet or smartphone an even more powerful tool. Last week, we took a look at an app that would let you use your iPad as a second monitor; this week, we'll talk about ways to use your iPad and iPhone as mobile file servers.

One of the useful features of the original iPod line was that the media players could also be used as external hard drives useful for transferring files between computers, a feature not to be discounted in those pre-Dropbox days. The iOS-equipped descendants of the iPod have shed those features, presumably to keep people from messing around with the devices' filesystems—iPhones, iPads, and iPod Touches will be recognized as digital cameras by file explorers and most other programs, but you can't use them to move any old file around as you could with iPods of yore, at least not natively.

Luckily, apps exist to circumvent this limitation: there are a few, like Phone Disk, that will let you mount your iOS devices as external drives just as you could before, which is fine if you can install the client software on every computer you interact with, but what if you're trying to get your files on to a computer on which you don't have administrative access? In this case, turning your phone into a mobile file server makes it much easier to connect to from any computer.