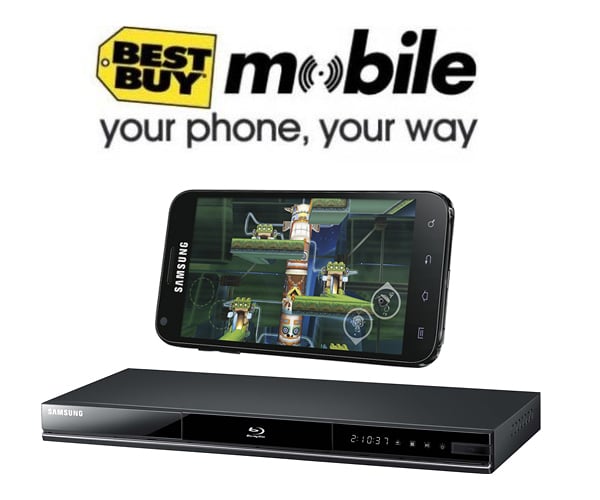 Beginning Sunday, November 13, through Saturday, November 19, Best Buy Mobile will be offering customers a deal on the Samsung Galaxy S II Epic 4G Touch. Anyone who purchases this Sprint phone with a 2-year contract will receive a Samsung BD-D5100 Blu-ray player for free. This really isn't a bad deal for anyone who was considering picking up the Epic 4G Touch on Sprint. While there's always a "new" and "better" phone coming out, the Galaxy S II series is undoubtedly this yearss smartphone winner. Not only did Samsung sell 10 million of them in 5 months, but they also recieved top honors at the 4G World Expo (The Epic 4G Touch won top spot).

The Blu-Ray player being offered isn't too shabby either, and in fact, these Samsung products actually compliment each other:

Key features of the Samsung BD-D5100 Blu-ray player include:

That means you'll be getting the "phone of the year," and a complimentary Samsung BD-D5100 Blu-ray player, all for the price of $199.99 (with a 2-year activation). Considering the retail value of the Blue-ray player is $89.99, it's like getting the Epic 4G Touch for $110 --- that's a great price for the phone that catapulted Samsung to the top of the mobile manufacturer list.

If this deal interests you, remember it will only be valid Sunday, November 13, through Saturday, November 19, at Best Buy Mobile. For those of you not interested, worry not, many more deals to come.