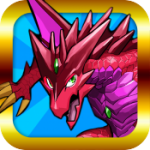 When it comes to free games, you can find a huge assortment of varying levels of depth. Some focus on fairly superficial forms of collecting and/or building. Others, like Candy Crush Saga [Free], have a fairly simple premise that builds into something quite a bit more complex in the long run. Then, there's Puzzle & Dragons [Free]. This game has pretty well taken Japan by storm, causing teenagers to leave their handheld gaming systems at home in favor of their smartphones for perhaps the first time. Virtually all of these kids are playing without paying a single yen, which is more than possible since this is actually one of the most generous free games I've played.

Puzzle & Dragons is a huge game with a ton of deep mechanics, both in the preparation phase of play and in the actual execution. Making a complete guide is well beyond the scope of one article, so I'm going to do something of a beginner's guide here. If you would like to see more, please let us know. 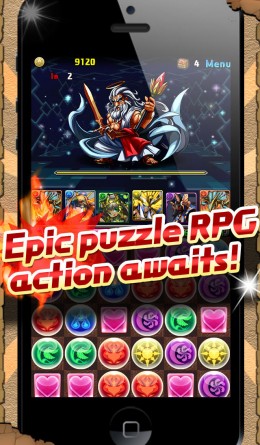 Your choice of starters doesn't matter very much. The game will ask you to choose between a fire, water, and wood dragon as your starting monster. All three of these little guys are equally useful, just in different situations, so go ahead and pick whichever one you like best.

Game your free rare monster chance. After completing the tutorial dungeons of the game, you'll be required to use the stones you've collected to pull a rare monster from the egg machine. If you get a three-star monster from this pull, you'll probably want to consider deleting the App and starting from scratch. Ideally, you'll get a five-star monster, and if you're lucky enough to do so, full steam ahead. A four-star monster is probably worth keeping, but it depends on how much time you're willing to spend re-rolling. It takes about twenty minutes to finish the tutorial again, but a five-star monster is going to make your life a lot easier in the long run

Don't blow your magic stones. The game is fairly generous with magic stones, its premium currency, and you'll get quite a few of them in the early going. Once you've collected the required five stones, the temptation to use the rare monster machine immediately is very high, but it's important to exercise discipline. There are certain periods of time, known as God Fests, that will give you a considerably greater chance of pulling a powerful monster from the machine. These are usually held on the weekends. It goes without saying you should not waste your stones replenishing your stamina or continuing in a dungeon, except in very special circumstances. 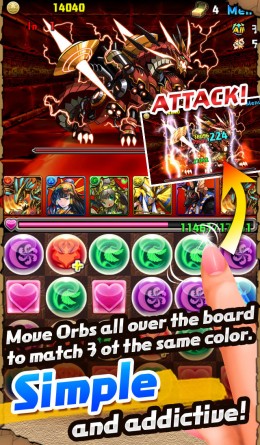 Initially, your team is going to be built around your first rare monster. It makes sense, after all. They're likely to be your most powerful monster by far for quite a while. So, exactly which team you build is going to depend on what you've got, and I can't list every possibility here. What I will do is cover some basic types of teams that have proven popular. Keep in mind that in the beginning, it's not really that important what team you put together, but once you've cleared the easier dungeons, this is easily the most important part of winning.

The Mono-Color Team. This is far and away the most popular style of team. The idea here is to build an entire team that uses just one color. For a beginner, this might seem disadvantageous, because what are you going to do with all of those other-colored orbs during gameplay? The idea here is that your team will have some monsters that can convert other orbs into the preferred color. A mono-color team allows you a lot of control during gameplay, and makes it easy to set up some really nasty combos. Each color has their advantages and disadvantages, with the dark teams being generally more popular due to the power of the Lucifer monster, while the light teams are less popular, possibly due to being weak to dark.

The Survival Team. The plan of this team is to win not by devastating the enemy with brutal attacks, but by staying healthy with recovery and high HP while it picks away at the opposing team with weaker attacks. For this team, you won't need to worry about colors so much as how much HP a given monster has and whether or not they can heal.

The Power Team. Your strategy with this team is to beat down the opponent as fast as possible, before they have a chance to take you down. Here, you're looking for monsters whose leader skills offer up an attack multiplier. Stronger monsters will have no type restrictions on this multiplier, which is great, but in the early going, you'll probably have to settle for type-restricted multipliers 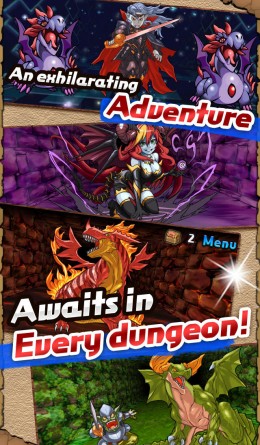 This is not a typical Match-3 game. Puzzle & Dragons differs from usual Match-3 games in two very big ways. First of all, the size of the board is considerably smaller than the average Match-3, which fewer pieces. This makes accidental matches a lot less likely, which decreases the effectiveness of just randomly matching things near the bottom. Secondly, rather than being restricted to switching pieces with just one adjacent space, in P&D you are free to move a piece anywhere on the board with each turn. The only restriction is the amount of time you can have the piece lifted, a generous amount if you're simply looking to match it with its mates. Too generous.

If you are just moving a piece for a single match, you're doing it wrong. It's generous with that timer because what you should actually be doing is using to your advantage the fact that a lifted piece will displace other pieces on the board as you move it around. Therefore, you should be looking at how you're going to move the piece to make matches en route to its final position. This is one of the things that keeps hardcore puzzle gamers coming back to Puzzle & Dragons. Check this video out to see what you should be aspiring to.

Don't forget to use your specials. Your specials come up every certain number of turns depending on the monster. If it's a small interval like ten or fifteen turns, don't be gun shy about using them on non-boss enemies. They'll likely be charged and ready to go again by the time you need them. If you're conserving your magic stones like you should be, you won't be able to continue and your stamina is of concern, so you really need to go all out to make sure you survive.

Use elements to your advantage. Like many RPGs, monsters have different affinities in this game, and each affinity is strong to one type and weak to another, with the exception of light and dark, which are both weak to one another. Since dungeons are often themed to a particular affinity, you'll want to use that to your advantage as much as possible when planning your team. If you're running a mono-color team, you should have a back-up team to handle dungeons where the enemies are strong to your type. 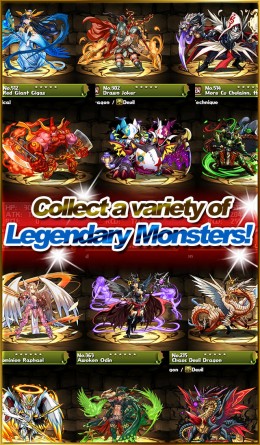 Spend your stones wisely. The main priority for your stones is to buy more monster boxes. In the beginning, you might want to spend some stones to get a few choice monsters, but once you have a workable team, having more space to store monsters for evolution and powering up is far more valuable than another member who may or may not fit into your team. If there's a God on offer during a God Fest that will really benefit your team and you have enough monster boxes, give it a try. Never use your stones for a stamina refill.

Keep your eyes open for rare eggs. Rare eggs have a green star on them. If an enemy drops a rare egg during a dungeon, this is one of the rare circumstances where you might want to spend a stone continuing if you screw up. After all, a rare egg for one stone is better than getting one for five out of the machine. You should only do this if you have a realistic shot of beating the dungeon, though. It should be pretty apparent to you if it's doable or not when you get that first game over. Don't throw away stones on a hopeless battle.

Log in as often as possible. This is one of those games that will throw ridiculous amounts of rewards at you for logging in. If you log in daily, you'll get a consecutive days bonus, but even if you don't, you'll get a bonus for logging in a certain number of non-consecutive days. This bonus occasionally offers magic stones. Regular logins also causes you to frequently appear as a potential helper to other players, which also rewards you.

Get friends with leaders who are useful to your party build. Before you go into a dungeon, you can choose a helper to bring with you from your friends and some randoms. You should naturally choose someone that complements your party build, and if any randoms fit that bill, you should send them a friend request.

All that writing and I feel like I'm just scratching the surface of the game. At the very least, this guide should help you get started on unraveling this game. Have fun building your team and taking down some giant monsters! Don't forget to stop in on the thread in our forums, as there's tons of good advice to be found in there, as well.