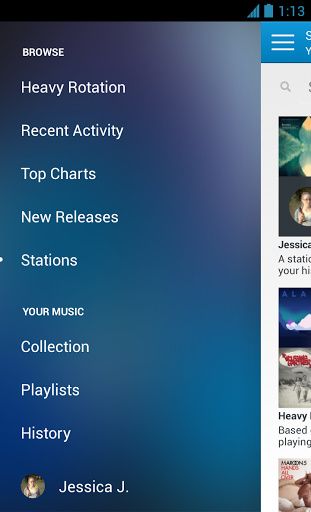 Rdio, looking to keep pace with other players in their space, has announced free internet streaming of radio stations on Android and iOS. With the new feature, Rdio hopes you’ll consider them in the same league with Spotify, Google Play Music, Pandora, and Slacker.

Users can choose from ten radio station types based on artists, songs, 400+ genres, and You FM. The latter, as you likely guessed, is a personalized station based on your listening habits.

SAN FRANCISCO – October 3, 2013 – Rdio, the groundbreaking digital music service that has reinvented the way people discover, play, and share music, today announced that its new, highly personalized streaming stations are now free on mobile to all iOS and Android users.
Starting today, stations are free for all users — even those whose subscriptions or trials have ended. Any user is now invited to listen to all of Rdio’s stations — drawing from over 20 million songs — at no cost through the Rdio mobile app, available in the Apple App Store and Google Play.

Launched in August, Rdio’s new and improved stations are a culmination of Rdio’s focus on beautiful design and usability. Stations are also smarter and custom-tailored to users, creating an effortless listening experience that highlights the best of Rdio. Everyone can now listen to all of the artist, song, and 400 genre stations available on Rdio as well as You FM and Friend FM — personalized stations inspired by an Rdio user’s taste in music and likes on Facebook. Since launching in August, nearly 2.3 million stations have been created.

“Station plays are up over 50 percent since our launch in August,” said Drew Larner, Rdio’s chief executive officer. “We’re excited to make one of our most popular features available to everyone for free, forever.”

Non-stop listening for free on Rdio’s stations is available on Rdio for iOS and Android in the United States, Canada, and Australia. Visit the Apple App Store and Google Play to download the Rdio app today.

About Rdio
Rdio is the groundbreaking digital music service that is reinventing the way people discover, play, and share music. Play what you want, when you want, or turn on a station for a perfect mix of songs. Listen anywhere — the web, your phone, even offline — and follow friends and artists to see what they’re playing.

Launched in August 2010, Rdio is headquartered in San Francisco and was founded by Janus Friis, the co-creator of Skype, and is currently available in 31 countries. For more information and to sign up, visit www.rdio.com.