Regency Classics now in one boxed set: The Elizabeth Chater Regency Romance Collection #1 Four eBooks for the price of one! 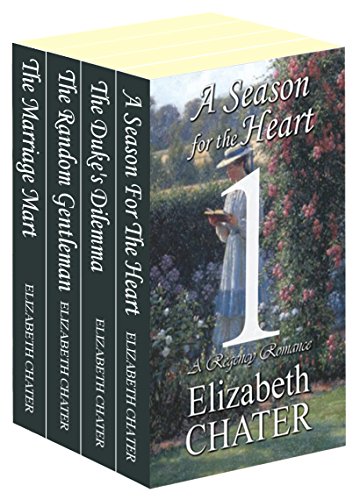 – Learn More
Text-to-Speech and Lending: Enabled
Become a fan! Follow Elizabeth Chater on BookGorilla
Don’t have a Kindle? Get yours here.
Here’s the set-up:

A SEASON FOR THE HEART (Now available as an audiobook)
Miss Melpomene Rand’s only refuge from a life of monotony and cruelty is the extensive library left to her by her grandfather. The fantastic notions and romantic heroes contained in those books are the only thing that distracts her from the abuse of her adopted family. But then a mysterious stranger, the Earl of Austell, finds they have a mutual malady of boredom, and he endeavors to rescue them both.

THE DUKE’S DILEMMA
After losing their parents in an accident, older sister Leslie Endale, her two younger sisters, and her brother Daryl, the nine-year-old heir to the Endale estate, run away from their wicked cousin, March Wardell, who is trying to do away with the young heir so that he may capture the earldom for himself. Leslie leads the young orphans to the ruined mansion of the Duke of Kenelm, Drogo Trevelyan, who has not entered the much-hated premises since his father died. Drogo discovers the Endale children in his home seeking refuge until they can reach their Great-aunt in London. Much to his chagrin, Drogo becomes entangled with the children’s plight and more specifically with one certain Lady Leslie.

THE RANDOM GENTLEMAN
Belinda is arranged to marry the Duke of Romsdale, but rather than acquiesce to tradition, she flees to Devon. She soon discovers that the Duke is in pursuit of her, and, disguised as a gypsy, he’s endeavoring to win what he believes is his birthright: her heart.

THE MARRIAGE MART
Athena always has her nose in a book, despite her grandmother’s insistence she find herself a husband. Her grandmother has a plan, take her to London, transform her from an ugly duckling into a swan, and marry her off to the first bachelor too dumb to recognize her intelligence. Her plan backfires when Athena meets the Duke and a social blunder turns them into instant enemies. As her grandmother had feared, the Duke is thoroughly threatened by her Bluestocking smarts, and his campaign to slander her in polite society may mean she’ll never be married.

“This author is tremendous! She has the ability to intertwine unusual Regency situations involving romantic schemes within the confines of historical settings, rules, and constraints. They all have excellent hero/ heroines and each has its own special twist of fate. There is never a dull moment, and the author is excellent in pacing of events and keeping the reader solidly involved in all that is happening.” 5 star review