“A remarkable Civil War tale about Northern characters fighting for their own freedom as they seek revenge.” –KIRKUS REVIEWS Where Eagles Dare Not Perch by Peter Bridgford

Where Eagles Dare Not Perch

by Peter Bridgford
5.0 stars – 2 reviews
Kindle Price: FREE
Text-to-Speech and Lending: Enabled
Don’t have a Kindle? Get yours here.
Here’s the set-up:

Zachary Webster was an innocent Maine farm boy before becoming a sharpshooter, but the violence of the Civil War battlefields has turned him into a natural killer. While home on his unit’s month-long furlough, he murders the man he believes has stolen his beloved. In doing so, he sets into motion three intensely dark journeys—his own as a soldier returning to a brutal and hopeless war; his sweetheart’s as she seeks absolution; and the brother of the murdered man, whose quest for revenge propels him into the most violent of worlds. When the three find each other amid the chaos and brutality of the Battle of the Wilderness, they’re faced with figuring out if they are tempered enough from their own redemptive ordeals to face whatever uncertain future awaits them after the bloody fighting is over. 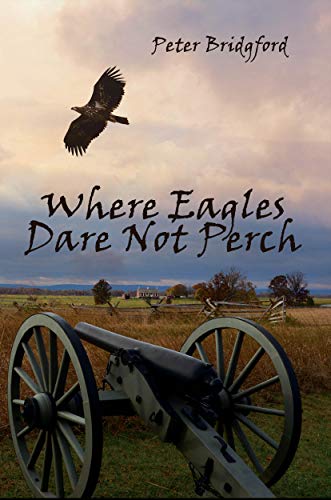