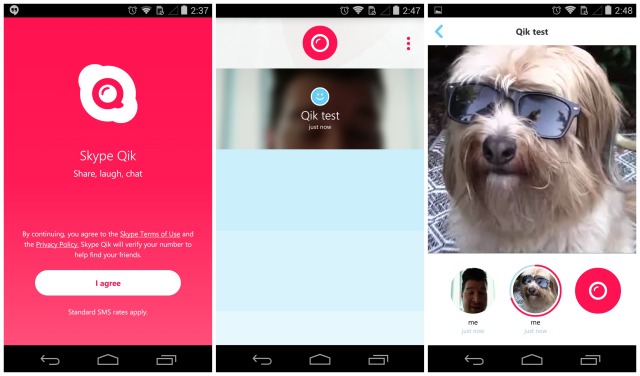 It’s hard to believe Skype launched nearly 11 years ago and since then, they’ve grown to become a sort of household name when it comes video calls over the internet. But really, not much has changed since then. Want to video chat with someone face-to-face in real time? Skype is great for that. But in our busy day-to-day lives, not too many people have the time or energy to stop everything they’re doing and carry on a lengthy conversation (a reason why less people are making actual phone calls, choosing instead to send short, thought out SMS messages or IMs).

Skype knows this and rather than completely overhaul their current app — which could alienate your mom, grandma, and cousins — they’ve introducing a completely new one. Well, sorta. It’s called Skype Qik and if that name sounds familiar, it’s a repurposed version of the Qik app you may remember coming pre-installed on old Android devices back in the day. As you probably guessed, video is has a lot to do with the new Qik, allowing users to send short video messages back and forth, the same way you would a text message. In fact, there’s no real way to send actual text — it’s all video.

The app uses your phone number to confirm the identity of you and others (similar to WhatsApp), and taking videos is quick and easy. Just pull down form the main conversation view and press record. You can chat privately, or amongst a group and sent messages can always be deleted if need be. In the event you can’t respond right away, you can send “reaction videos” you’ve already pre-recorded (called Qik Fliks) and sent messages are automatically deleted after 2 weeks to keep things “fresh.”

As the mobile apps industry moves forward and we’re seeing hip new apps like Snapchat or WhatsApp become the go-to communication method for younger users, it’s clear Skype had to do something. And while there are a vast plethora of apps and messaging clients that allow you to send short video messages (Glyde, Hangouts for iOS), none of them have such a familiar brand name as Skype backing them. It’ll be interesting to see if the all new Skype Qik sinks or swims.