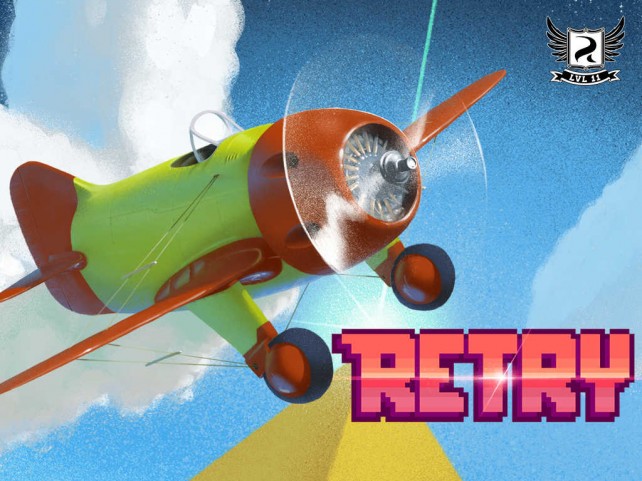 Rovio has just officially released Retry on the App Store worldwide, nearly half a year after being soft-launched in Canada, Finland, and Poland.

The first title to be released by the Angry Birds creator under its LVL 11 experimental game publishing arm, Retry is a free-to-play retro-style arcade flying game.

Similar to Flappy Bird and Swing Copters, Retry has you tapping your iOS device’s screen to fly and avoid various obstacles. But unlike Dong Nguyen‘s popular pick-up-and-play games, Retry is level-based rather than endless.

In Retry, by the way, you have to try to take control of an airplane. Unfortunately, though, it’s not just an ordinary airplane. As Rovio describes it, it’s “a smoking, loop-the-looping, out of control, 8-bit jalopy of an airplane.” So don’t be surprised if the reason behind the game’s name becomes apparent soon enough: You’re likely to fail again and again and to retry and retry ad infinitum.

Retry has the following key features:

Compatible with iPhone, iPod touch, and iPad running iOS 6.0 or later, Retry is available now on the App Store worldwide.

Following the global launch of Retry, Rovio is expected to officially release the next title from LVL 11, the quirky avatar-enhanced game Selfie Slam, which is currently in soft-launch mode on the App Store in Canada, Finland, and Sweden.