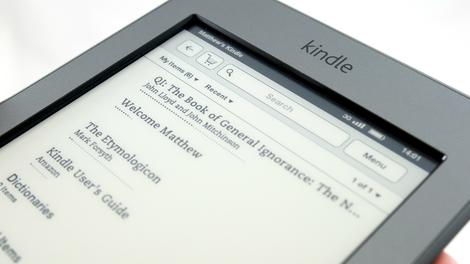 The Kindle Touch is the latest Amazon ebook reader to launch in and outside of the US and the first to sport a touch-sensitive display.

The latest batch of Kindles has actually been a bit slow to filter out to the UK. We got the new £89 Kindle fast enough, but the Kindle Fire has been totally absent anywhere outside the US since its launch, and it's only now that the Kindle Touch and Kindle Touch 3G have arrived.

The £89 Kindle was a simplified device, losing the keyboard and 3G access to keep its size, weight and price down. The Kindle Touch is a little more flexible, even though it's arguably simpler still. There's only one obvious button on it now, below the screen, like the iPad, but it does come in a 3G version for £169 (which is what we have here for review), or a Wi-Fi only model for £109.

The interface is controlled entirely by touch, with new finger-friendly menus on offer. When you're reading, different parts of the screen offer different options when you tap them – most of the screen is dedicated to turning the page forward one when you tap it, but the far left takes you back, while the top of the screen brings up the menu buttons.

Despite the addition of the touch interface, the screen hasn't really changed. It's still a six-inch, 600 x 800 E Ink display, with 16-level greyscale. It's no Retina display, but its crisp and clear nevertheless, and is even an improvement on other models, which we'll go into on the next page.

The Kindle Touch models come with 4GB of memory, with around 3GB of that being available for storage (Amazon says it's good for about 3,000 books) – double what's on offer in the £89 Kindle.

The addition of touch controls, 3G and extra storage hasn't come without comprises, though. The Kindle Touch weighs 213g, while the 3G version weighs 220g – a good 30 per cent heavier than the 170g Kindle. They're still very light compared to the likes of the iPad or Asus Eee Pad Transformer Prime, of course.

The Touch models are also thicker, coming in at 10.1mm compared to the £89 Kindle's 8.7mm. In fact, it's larger in every way: the Touch is also slightly wider and taller than the cheaper Kindle.

So, a touch interface, longer battery life, optional 3G, more storage, more money, more weight and added thickness… does it balance out into a better Kindle?

Inevitably, the first thing you'll want know about the Kindle Touch is how well the touch controls work. Amazon has used infrared technology to add its touchscreen capabilities, which avoids using any touch-sensitive layers on the E Ink screen itself that might compromise its quality.

When you combine that infrared technology with the E Ink screen, which is, shall we say, not the fastest to refresh in the world, what you get is touch technology that's perfectly serviceable, though not exactly as responsive as the Android and iOS tablets of this world.

There's a slight delay when you make screen selections, but it's not too bad at all – after all, you're not running complex apps here. The menus all offer decent size buttons to hit, and the accuracy seems spot on.

Perhaps surprisingly, there's even some limited multitouch support. Pinching in or out on a book's pages brings up a floating text-size indicator, and you can then either keep pinching to change the text size, or just tap on one of the sizes in this window.

Perhaps most importantly, the touch controls feel totally natural, and understandable. To highlight, you simply tap and hold on a word and then drag your finger over your selection and choose Highlight (or Add Note or Share) from the pop-up menu.

Swiping to turn the page works well (it too has an unavoidable delay while the display updates), and has the advantage of making how you use Kindle books mostly consistent across the likes of the Kindle Fire and through its apps on devices such as the iPad.

The only place where the touch interface struggles is scrolling. There aren't many lists in the Kindle interface, but a book with a lot of chapters might give you problems. Basically, you drag to scroll, as you would expect, but the delay makes it a bit of a pain. More than that, there's no momentum scrolling, so if there's a very long list, and you're not sure what to search for, you could be there for some time.

The on-screen keyboard, though, works very well. You can pretty much type at full speed, despite the delay in visual feedback, because the keys are separated well. There's an autocorrect bar that pops up, and numbers and punctuation on a second screen.

It's certainly several levels up in convenience from using the navigation pad on the £89 Kindle, so if you tend to search for and buy a lot of books actually on your Kindle device, it's a big advantage.

As we said, the screen itself is pretty much the same as it has been for some time now, but in a side-by-side comparison between the Kindle Touch 3G and the £89 Kindle, the text on the Touch model is noticeably blacker than on its slimmer brother.

The difference isn't enough for us to say that you should dismiss the £89 Kindle based on it, but having spent time using both, the Touch's screen is definitely the better of the two, with text standing out better than ever.

Like the basic Kindle, the screen now needs to do a full refresh on black far less often. It's able to go through several pages changing just the text before you get that ol' black magic flashing up on the screen. It's certainly an improvement, though every so often you might notice parts of images from the previous screen lingering post-refresh (the keyboard in particular can often be faintly seen after it's been dismissed).

Though the screen on the Kindle Touch might be slightly nicer than the £89 Kindle, it does have one very slight downside. It's set much further back into the body of the device, with the thicker bezel presumably housing the infrared touchscreen technology.

In the £89 Kindle, the screen sits right at the front (save for a small lip), with the text seeming to sit right on the page, like… well, a book. It helps to remove the idea that you're looking at an electronic device instead of paper, but the set-back screen on the Touch serves to remind you that you're holding gadgetry in your hand, not a real well-worn copy of the Hitchiker's Guide to the Galaxy.

Its extra size over the smaller Kindle is a bit unfortunate, but isn't a dealbreaker. The weight difference is very small in real terms,

The wireless performance of the 3G version of the Kindle Touch was very strong, picking up signal even in areas that phones struggle with. It couldn't perform miracles, of course, but we were impressed.

It was fast and reliable, too, letting us quickly download out archived books to start this review within a minute or two of taking it out the box when we started reviewing it. This is one area that Amazon has really nailed – the convenience of Kindle is pretty much unmatched.

Similarly, battery life lived up to our expectations. After several days of quite intense use (well beyond Amazon's paltry half an hour per day suggestion) with its wireless capabilities turned on, the Kindle Touch had about 80% of its battery left. This is absolutely one of the killer features of dedicated ebook readers over tablets, and even the iPad's impressive battery life, and Amazon continues to get it spot on here, too.

The Kindle Touch features all of the latest Kindle software bells and whistles, as well. X-Ray lets you see, in Amazon's words, the "bones of a book", so you see quickly how often certain people, words or themes come up. Text-to-speak is here in the 'Experimental' section, as is a web browser, though this didn't work on our review model.

As we mentioned, highlighting and adding notes is here, as you'd expect, and is particularly easy compared to the £89 Kindle, thanks in no small part to the on-screen keyboard.

Tapping on a single world also brings up the Oxford Dictionary definition, and you can look up any word on Wikipedia in the same pop-up menu (you can also load full Wikipedia from here, but since our web browser didn't work, this wasn't an option for us).

All of this makes this currently the best Kindle model for academic use at the moment, we'd say. It's easier to select and highlight text with touch than with a D-pad, and the on-screen keyboard is infinitely better to use than on the £89 Kindle's, though perhaps not the Kindle Keyboard's physical keyboard. This is all supported by Whispersync, of course, sending your notes and highlights to any Kindle-supporting device.

However, there are still some downsides that persist. There's no built-in light, so you'll need a light source of some kind of read anything. The lack of ePub support is also still an irritation, even if you can import your own PDFs.

The Amazon Kindle Touch 3G seems to present as many small advantages as it does minor disadvantages when compared to the £89 Kindle.

Like its cheaper brother, the Kindle Touch represents excellent value for money, particularly in its £109 Wi-Fi only version. Whether the 3G access is worth £60 is really up to personal preference (though do remember that, unlike most 3G-enabled devices, it requires no monthly cost).

The Kindle Touch's interface works really well for general reading. There are weaker parts of the interface, but for the most part it's natural and convenient.

Though it's slightly heavier and larger than the £89 Kindle, it's by such a small amount in real terms that it seems a fair trade-off for extra storage and larger battery life. And the slightly improved screen is great as well.

And Amazon's suite of services that power the Kindle are rock solid – Whispersync works great, the Kindle Store is excellent and the devices themselves are brilliantly reliable.

The Kindle Touch doesn't really seem to offer much outright to make it worth more money than the £89 Kindle. There are useful features, certainly, but whether they're worth the extra is another personal choice.

And there are parts of the interface that don't work as well as a touch interface, particularly lists, and it's a shame that the screen is set back, reducing the 'invisible' nature of the device.

There's no doubt that the Kindle Touch 3G is a great device. It's not a question of whether we recommend it or not – we do – but whether it's the right Kindle model for you.

For academic use, we recommend the Kindle Touch over its £89 sibling. It's so much easier to search, highlight and annotate using the touch interface that it's no competition. Similarly, if you like to buy a lot of books on your device on the go, the fact that there's a 3G option could sway you.

However, if you just want a simple high-quality ebook reader for taking everywhere in your bag and reading your library, the cheaper, smaller, lighter £89 Kindle might be the way to go. You won't be disappointed with either.