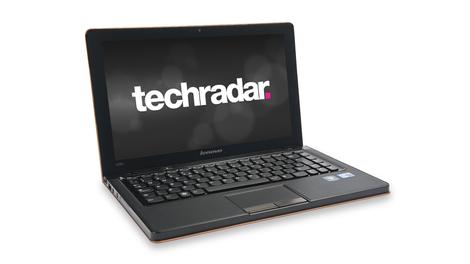 The Lenovo IdeaPad U260 is quite a looker. Unusually for Lenovo, known for producing solid black business machines, the U260 is a slim, golden ultraportable that features a head-turning design and a weight of only 1.3kg.

It measures only 23mm in thickness and has a 12.5-inch screen, making it an ideal choice for someone looking for a device to cart around with them.

Make no mistake though: this is not an Ultrabook. In fact, the U260 doesn't even feature a Sandy Bridge processor. All you get is a first-generation Core i5 chip that produced a pretty poor result in our benchmarking test.

The other danger is that at £700 you're nearly in Ultrabook territory in terms of cost. But on the positive side, this really is an impressive-looking machine.

The golden coating on the lid is a soft, rubberised material and looks excellent. It's resistant to fingerprints, although particularly greasy smudges will still leave a mark. The base of the laptop has the same coating, while the interior is completely black, giving the U260 the appearance of a leather-bound book.

The keyboard is an isolation-style affair with the custom Lenovo moulded keys. Due to the size of the chassis, there's no numeric keypad or hotkeys, but the keyboard itself doesn't suffer. We found typing quickly on the U260 was easy, although Lenovo has included its customary skinny return key that will frustrate some.

The touchpad isn't huge but fits nicely in this chassis, given its size, and you're given two solid click buttons. It's got a polished glass surface and is smooth and extremely responsive. There's also a dedicated scroll function built in to the right side of the pad.

The screen on the Lenovo U260 only measures 12.5 inches across and the surrounding bezel is fairly thick. This means that although the 1,366 x 768 pixel resolution screen supports 720p HD video, we wouldn't recommend this as a laptop for movie lovers.

Along with the small screen, the on-board speakers aren't powerful or punchy enough to deliver an effective movie experience for more than one person. However, to give the Lenovo its credit, it does come with both a VGA and HDMI ports to connect to an external monitor or HDTV. So, feasibly, you could use this as a media machine by connecting it to your TV.

The Lenovo's on-board storage space is limited to 128GB, which isn't much, but this is a solid state drive rather than the traditional hard disk drive with a spinning platter that stores data. Instead the solid-state drive (SSD) works the same way as a standard USB flash disk with no internal moving parts. This uses less energy and is lighter as well as faster when reading or writing data, ensuring that the Lenovo is fairly quick to boot up and get going.

In terms of processing power, the Core i5-470UM chip isn't as fast or powerful as second-generation Sandy Bridge processors. But for the majority of day-to-day tasks it still functions well - helped by the standard 4GB of RAM. You might notice a bit of lag if you try running several complex programs or websites (such as video streaming sites) at once but otherwise it copes.

If you want to boost the Lenovo U260 with some added connectivity, then you've only got two USB ports to choose from. Also, because of the size of the chassis, Lenovo has omitted the optical drive entirely.

There is an Ethernet port for a wired connection to the internet if you don't want to use the 802.11n Wi-Fi connection. You can also attach Bluetooth devices to the Lenovo U260, but the laptop only features the older 2.1 version which isn't as fast as the latest 3.0 incarnation.

We'd like to be able to tell you that when it came to the battery test, the SSD and lower-spec processor gave the U260 Sisyphean levels of stamina. Unfortunately, that isn't the case: all it could manage was 124 minutes of looped high-definition footage run in conjunction with our Battery Eater benchmark.

Given that this laptop's strength is its portability, that result is definitely disappointing and immediately makes us cautious of packing the U260 up and taking it along on a trip.

It's difficult to know how to proceed with the Lenovo U260. It's a great-looking laptop with featherweight dimensions and a lot of usability. On the other hand, it's quite expensive and nearly every aspect of the internal specs is dated.

For a business user or frequent traveller, who needs something light and quick to compile documents or check websites, this is perfect. But, then again, you might as well pay a little bit more and get an Ultrabook. The Asus Zenbook or Samsung Series 5 will manage everything the Lenovo U260 does and then some.

With that in mind, we have trouble recommending the Lenovo U260. It's one of the nicer laptops we've seen and the lack of features and dated performance wouldn't matter if it was £200 cheaper. But as it is, we'd caution you to look elsewhere for an ultraportable laptop with more on offer.