Rogers customers still rocking one of the members of Samsung’s 2015 main flagship duo, the Galaxy S6 and Galaxy S6 Edge, are getting their update to Android 7.0 Nougat at the very beginning of May, according to a chart posted up by a Community Specialist on the carrier’s forums. The chart goes over all Rogers devices, with those that either recently got updates or are slated to get them in a special column up top. According to the chart, May 1st is when Nougat will begin rolling out for the two Samsung devices in question, and the Pixels and the Nexus 6P will get a security update on that date, all while the Sony Xperia X Performance gets itself some security and bug fixes. Samsung’s Galaxy Core LTE is supposed to be getting a maintenance update at some point, but the date has yet to be announced.

It should be noted that Rogers outright says that dates can change, and in this case, they already have. The Galaxy S6 and Galaxy S6 Edge were reportedly supposed to get Nougat earlier this month, but due to some complications it seems that the update was eventually scrapped and the devices were taken off of the update chart entirely. Their reinstatement with a fresh date, especially one so close, is a pretty good sign. Still, owners of the two devices who are eagerly awaiting their update to Nougat should take this chart with a grain of salt because of the previous delays. 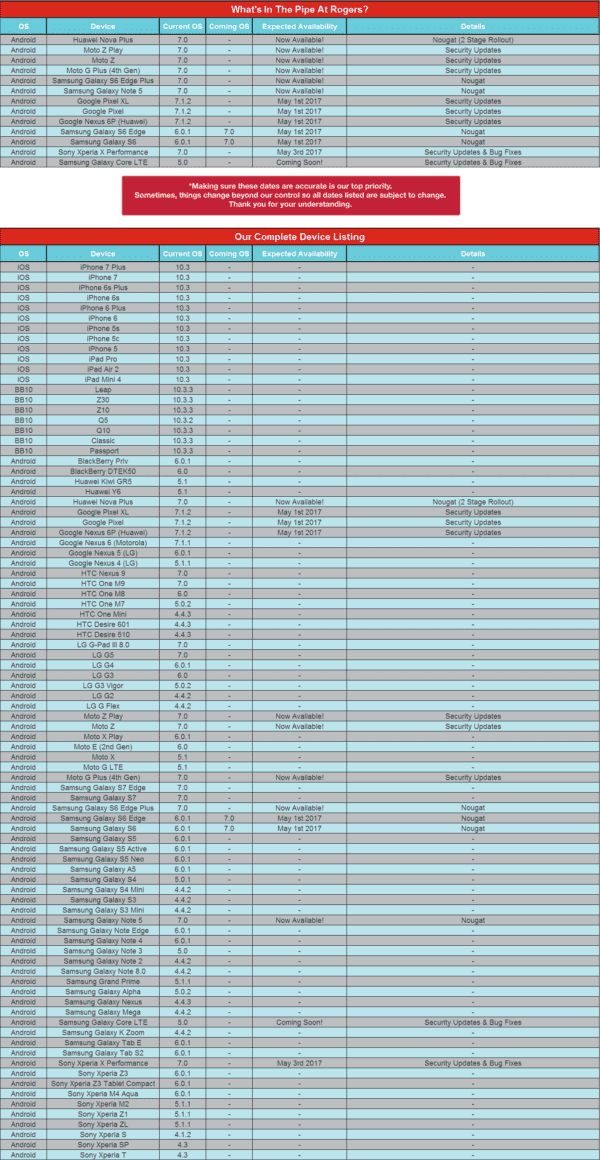 The post The Rogers Galaxy S6 & S6 Edge Will Get Android 7.0 May 1st appeared first on AndroidHeadlines.com |.